– “…Every day counts now, and all your actions matter.  It’s time to build resilience.  At the household level first, and then within your community.  Deepen your pantry, deepen your friendships, and deepen your soil. The more you can rely on yourself and those around you, the better off you’ll be”

It’s time to be our own heroes, because those in charge sure won’t be

Even before the coronavirus pandemic hit, things weren’t all that great for the bottom 90% of households.

The median household was barely scraping by with ultra-low financial reserves, meager retirement savings and high levels of debt. All while being relentlessly crushed by cost of living inflation running far higher than the blatantly fraudulent government statistics offered up by the BLS.

Even more infuriating, the economic pie was preferentially handed to the top 10% — well, more specifically, to the top 1%. And even more dramatically to the top 0.1%.  Don’t even get me started on the 0.001%… 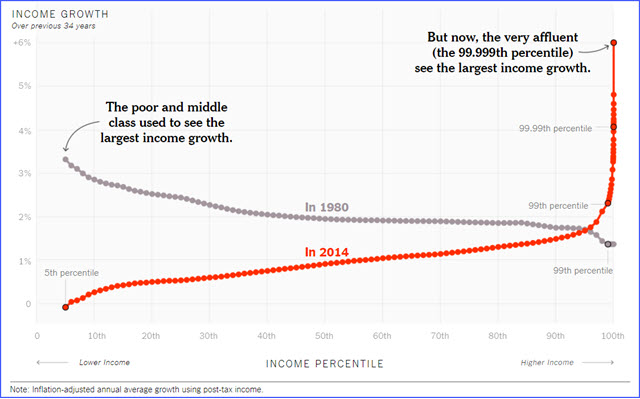 While often presented in the media as a puzzling thing without any root cause, both the income and wealth gaps are the direct result of Federal Reserve policies and actions.  Helped, of course, by lobbyists for the elites influencing Congressional tax legislation.

So it’s no accident that over time, tax rates on the rich have been substantially cut: 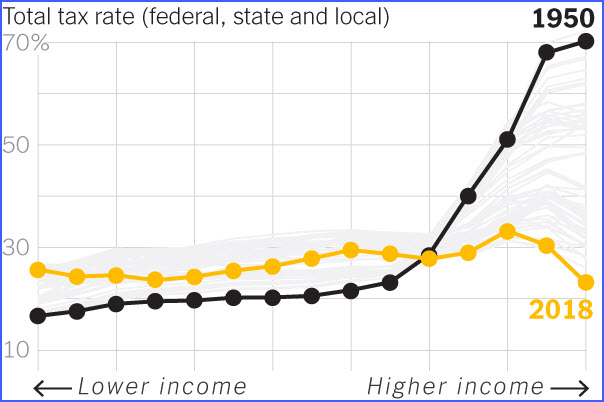 This chart says that the very highest income earners have a lower effective tax rate than anybody else in the nation.  Billionaire Warren Buffett famously pays a lower rate than his secretary. Goldman Sachs bankers are taxed more favorably than their Uber drivers. Again, this isn’t happening by accident.

And it reveals that, despite the fiction of fairness and freedom, America’s true values and priorities are aimed at funneling more and more of its wealth to in the pockets of an elite few.

Said another way: The final looting operation has begun.

The reason Peak Prosperity exists is to fight this outcome tooth and nail.  The path that the US government and Federal Reserve have charted ends in the destruction of prosperity for all of us. Yet the current crop of national managers (not leaders) are just too self-isolated in their echo chambers to grasp that.  They’re insulated from the impacts of their policies and so they can’t quite see ahead to the endgame.  Or they simply don’t care.

Which is why I am in a certain way thankful for SARS-Cov-2. It has woken up a center mass of people and alerted them to the true reality of their situation.  It has revealed just how corrupt, self-serving, and disinterested the elites are in the plight of the middle and lower classes.  It has exposed the extent to which institutions and corporations are failing at their most basic of duties.

It has finally laid bare the truth: We are on our own.

There’s no rescue coming.  No next elected official who can repair all that’s gone wrong.  The very DNA of the organs of the State has mutated beyond repair.

Which in a twisted sense is positive news. We need the status quo to fail so it can be replaced with something better.

Constructive change is long overdue.  The dismal charts above show that the wealth disparity in the US didn’t suddenly appear in 2020; it’s been festering for decades.

The grotesque inability of our health care to acknowledge let alone utilize the profoundly effective Covid-19 treatments that exist (e.g. MATH+, HCQ+ early on, etc.) in favor of overhyped/unproven new drugs like Remdesivir which barely works at all, is nothing new.  It speaks to a corruption of science and the power of monetary greed at the expense of basic goodness and human decency that also did not suddenly arise in 2020.  Those too have been with us for a long time.

When farmers can only survive by going deeper into debt while receiving only 7 cents of the final dollar spent by the consumer who buys their food at the store, it speaks to a profoundly misguided system that seems to have forgotten that without the producers you have nothing at all.  Yet it merrily squeezes the farmers year after year taking as much as it can for itself.

When such disconnects become so entrenched that they are no longer even questioned, you cannot vote them back into working order.  You cannot tweak some policies and fix them.  They need to be swept aside and rebuilt.

The time before us is about remembering what’s important and veering back towards integrity and away from myopic self-interest.  Away from “me” and back towards “us.”  No, I am not saying socialism, communism, or any other ‘ism.’  I am saying that we’re all in this together and that it’s time to swing back towards acting as if we care about more than ourselves, as if we understand how the larger system works and join together to make it function even better.

No, I don’t mean vote in elections.  (Though sure, go ahead and vote if that makes you feel any better. But personally I’ve lost all attachment to the idea that there’s a lick of worthwhile difference between the major parties.)

There’s nothing you can do about the fact that the world’s central banks have printed up $5 trillion of new currency in approximately 6 months. That’s roughly equal to their combined output during 4 entire years of the Great Financial Crisis: 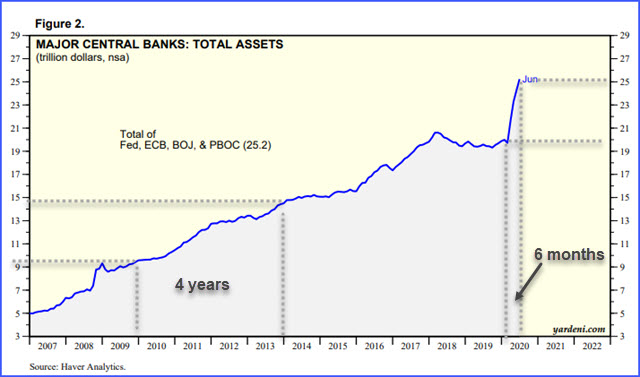 None of us can vote the central banker rascals out (they are appointed), but we can we vote with our currency — exchanging it for gold, silver, land, and any other hard assets we can manage to store well.

It’s worth noting that gold, which we’ve been strongly recommend folks accumulate for this very reason,  just hit a brand-new weekly closing high this week :

And silver’s at multi-year highs.

Both are telegraphing a loss of confidence in the US dollar and the global financial system itself.

We can’t do anything about our politicians’ weak, ineffective efforts at getting people to wear masks or take Covid-19 seriously. But we can vote with our feet and move to more sustainable, less densely populated areas, as is already happening in droves.

We can’t control the anger of the populace or the sudden proliferation of riots and unrest. But we can arm (and train!) ourselves to protect our loved ones if need be, which explains surging gun sales.

We can’t predict the quality, the price, or even the availability of vegetables and meat. But we can plant gardens and begin raising chickens.

SARS-CoV-2 has exposed the rot in the system.  And that’s a good thing because it needed to be.

No problem has ever been fixed without first being identified.

Now we can focus on fixing what can be salvaged and tossing the rest.

Perhaps you’re a fast adjuster and you’re one of the few folks already busy operating in the solution space. If you are, I’ll bet that you know lots of people who aren’t there yet. Who are still clinging to some level of denial or bargaining that the failing status quo can somehow continue indefinitely.

Don’t worry, they’ll catch up. Eventually. Because they’ll have to. Change will be forced upon them.

The data all point to a rapidly intensifying set of trends that will completely reshape both our future prosperity and opportunities we have to pursue it.  Great fortunes will be made and lost.

As with any fast-changing moment in history, the trick is skating to where the puck is going to be.

My co-founder Adam Taggart and I have spent the past ten years laying out the case for why this moment in time would inevitably arrive, and how people can prepare themselves.  Not to merely survive, but to thrive.

We’ve cajoled, nudged, urged and cautioned people to read between the lines and heed the warning signs.  We’ve strongly advocated for converting paper wealth into precious metals and other hard assets, developing multiple income streams (in case a bread-winner’s job was lost), developing stronger relationships and a healthier body.

Every one of our recommendations has served our readers very well leading up to — but especially in — today’s trying times.

Did we know Covid-19 was coming along?  No, of course not.  But all that the pandemic has done is accelerate the public’s recognition of the many predicaments and plights we’ve been warning of.

So, with systemic instability increasing and the serious changes coming fast and furious now, how should you be prioritizing your focus?

Even if you’re a first time reader of our material and haven’t taken any steps yet, there’s still much every one of us can and should be doing.

The economic and health consequences of Covid-19 are extremely severe.  Expectedly so.  And they are still creating havoc in ways we don’t fully appreciate yet.

So every day counts now, and all your actions matter.  It’s time to build resilience.  At the household level first, and then within your community.  Deepen your pantry, deepen your friendships, and deepen your soil.

The more you can rely on yourself and those around you, the better off you’ll be.

Which is why in Part 2: Welcome To The Movement, I detail out the tremendous advantage of learning from and participating in the Peak Prosperity “tribe” as we all plan for the approaching turbulent times. There are literally tens of thousands of like-minded people of goodwill and staggering expertise all around the world connecting through this online community, eager to help and support one another.

Our individual chances of making it through with safety and optimism are much higher together vs going it alone. Consider joining the movement

We Are On Our Own In The Post-Covid World

One thought on “RETURN TO EDEN: We Are On Our Own In The Post-Covid World – By Chris Martenson”