– “…The rebel gods of ancient Greece divided the universe between them. Zeus was declared the supreme god, ruling over all others. They all lived on the peak of Mount Olympus in Greece – but not peacefully. Greek mythology is full of fights between the gods…Prometheus created man out of earth (mud), and the goddess Athena breathed life into his creation. Here we see another common pattern repeating in ancient creation myths – the spirit is given to the body so that it will become alive”

Human Origins According to Ancient Greek Mythology – By John Black

Every culture has an explanation about how we got here. The ancient Greeks were no different. The dramatic story of the origins of humanity in Greek mythology involves love, pain, and a hefty dose of violent fighting between divine family members.

Variations of the creation story of Greek mythology can be found within many ancient texts. The most complete example is Theogony by the Greek poet Hesiod, who lived around the 8th century BC. His work combines all ancient Greek myths and traditions up to his time.

In Greek Mythology, Everything Began with Chaos

According to Theogony, in the beginning only chaos and void existed throughout the entire universe. It is worth noting here that the Greek word chaos does not have the same meaning as it holds today – it simply meant ‘empty space or a dark void.’

Chaos was followed by Gaia (which means earth) and Eros (which is love). It is not specified if Gaia and Eros were born from Chaos or whether they were pre-existing; however, Hesiod mentions that Gaia came into existence in order to become the home of the gods. This is similar to other ancient myths, such as the Sumerian creation myth, which describes how Earth was initially created as a dwelling for the gods.

Rebellion Among the Early Generations of Ancient Greek Gods

Chaos also gave birth to Erebus, who was the darkness of the underworld, and Nyx (night). Gaia gave birth to Ouranos (aka Uranus) (heavens) and Okeanos (ocean).

From there, the Greek myth describes how the gods mated with each other to complete the whole of creation. Nyx and Erebus mated, and Hemere (day) and Aether (air) were born. Nyx also gave birth to other gods like Moros, Thanatos (death), Nemesis, Hypnos (sleep), Eris and Keres.

Uranus and Gaia became the first gods to rule. Uranus mated with Gaia and produced three Cyclopes and 12 Titans (a race of giants). One of the Titans was Cronus (Saturn). And from here the pantheon of the famous gods of Greek mythology begins. 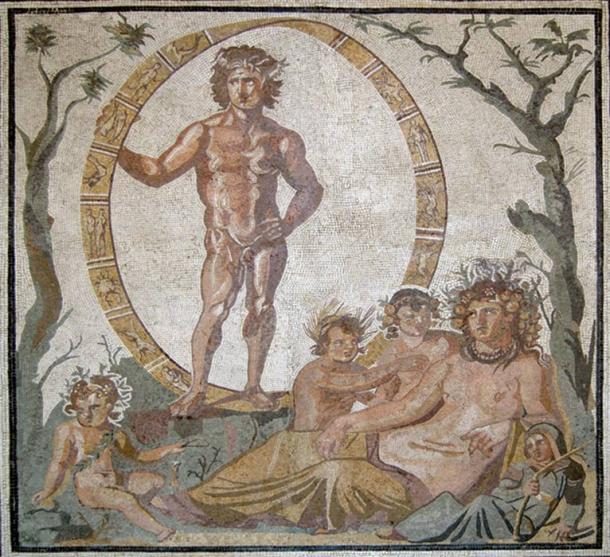 Roman mosaic of Aion-Uranus with Gaia and the four seasons. ( Public Domain )

Uranus was jealous of his children and condemned them to stay inside Gaia. He blocked her wombs (caves) and this both pained and angered Gaia. Thus Gaia asked her children to help to fight back against their father. One of the Titans, Cronus, stepped forward and he punished Uranus by castrating him with an adamant scythe that Gaia gave him. Uranus’ genitals were tossed into the sea and his blood fell onto Earth and created more children—Aphrodite, Erinyes ( the Furies ), giants, and nymphs.

Uranus and Gaia were now living more peacefully with each other and Cronus took over as the ruler of the universe. Cronus then sent his siblings, the Cyclopes and the Hundred-Handers, into Tartarus (the dark world under Earth) because they were causing problems for him. 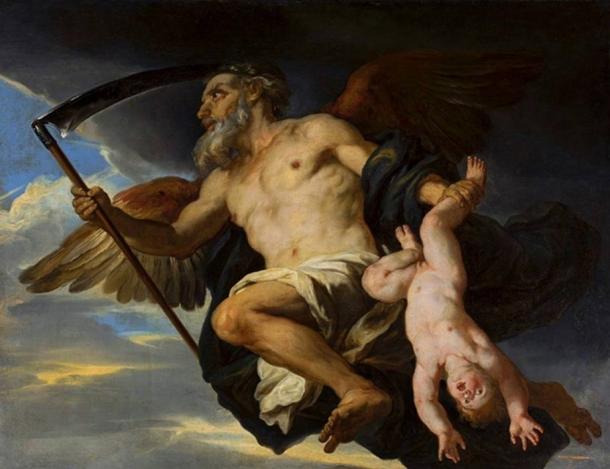 ‘Chronos and his child’ by Giovanni Francesco Romanelli. ( Public Domain )

Uranus and Gaia warned Cronus that his problems were not over as one day he too would be overthrown by one of his sons. As a result, Cronus decided to swallow his children. But Gaia was able to save baby Zeus (Jupiter), who was raised on the Greek island of Crete until he, with the help of Metis (another Titan), made Cronus regurgitate the swallowed children.

Led by Zeus, the six siblings (Demeter, Hera, Hestia, Hades, and Poseidon) rebelled against their father. The years of battle are known as the Battle of the Gods and the Titans, or the Titanomachy. The battle seemed like it would never end, but then Zeus had an idea. He released his uncles, the Cyclopes and the Hundred-Handers from Tartarus and they helped him turn the tides of war by making him thunderbolts and throwing huge rocks at his enemies. Zeus and his allies were victorious and threw Cronus into Tartarus forever. 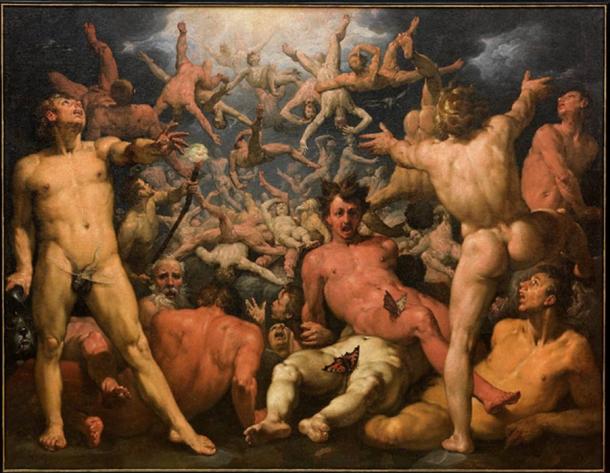 Three Titans did not support Cronus in the battle: Prometheus, Epimetheus, and Okeanos. Prometheus later joined Zeus. All the Titans were sent into Tartarus (the underworld), with the exception of Prometheus and Epimetheus.

After that, the rebel gods of ancient Greece divided the universe between them. Zeus was declared the supreme god, ruling over all others. They all lived on the peak of Mount Olympus in Greece – but not peacefully. Greek mythology is full of fights between the gods – similar to other myths and religions—and we have not even reached the point of creation of humans and their role in the havoc yet!

The Creation of Humans in Greek Mythology

Prometheus created man out of earth (mud), and the goddess Athena breathed life into his creation. Here we see another common pattern repeating in ancient creation myths – the spirit is given to the body so that it will become alive.

Epimetheus was the one to whom Prometheus assigned the duty of giving all living creatures of the planet different qualities/skills; however, Epimetheus had already given all the good skills and qualities to other creatures, and nothing was left for man. Consequently, Prometheus made man stand upright—as only the gods had done—and gave him fire.

This made Zeus angry because he was not very fond of man, though man was Prometheus’ favorite creation. Zeus decreed that man must present a portion of each animal they sacrificed to the gods, but Prometheus loved man more than Zeus so he tricked Zeus and, as a result, Zeus took fire away from man. Prometheus then stole fire back and returned it to man. For that, Zeus punished both man and Prometheus.

The punishment that Zeus inflicted on man was to create Pandora (with the help of the god Hephaestus), the first woman. He gave Pandora a jar as a gift and told her that she was not allowed to open it. The jar was full of misfortune, disease, and plagues, but at the bottom there was also hope. 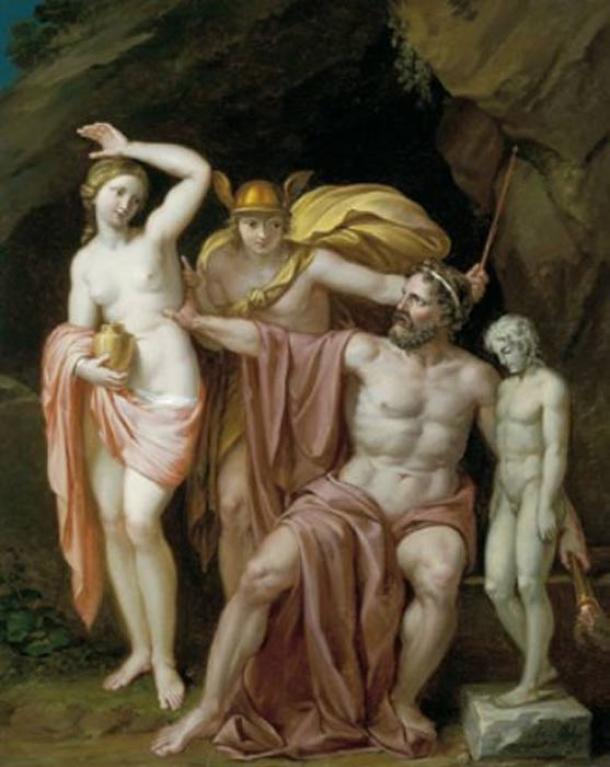 Prometheus was condemned to be tormented on the Caucasus Mountain – where he was chained to a rock with unbreakable chains. Every night an eagle would appear and eat his liver. During the day the liver was reformed, but each night the eagle would return and eat it again. Eventually, a Centaur, Chiron, and a semi-god, Heracles, would release Prometheus from his torment.

It is clear that Greek mythology contains parallels to other ancient mythologies and religions, such as water being the beginning of all life, the on-going fighting between gods, and, most importantly, the denial of knowledge to humans by the gods.

One thought on “HIDDEN HISTORY: Human Origins According to Ancient Greek Mythology – By John Black”