Big Money and the Big Lie – By Bruce Kirby

The plandemic was [conveniently or coincidentally, take your pick?] “dropped” because we are on an exponential, vertical growth curve for money which had to be created – due to the magic of compounding – before we ever had a “virus”. 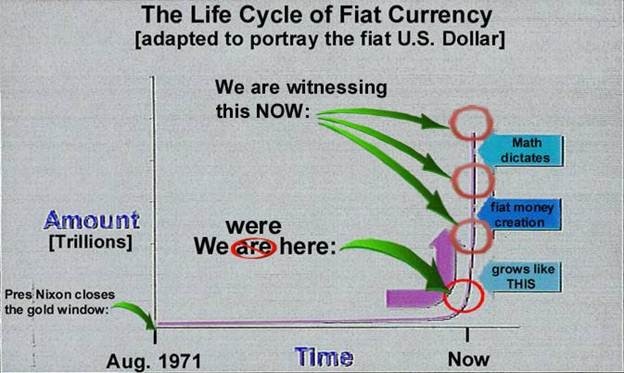 I would like to now remind EVERYONE of a piece I penned back in August of 2018 where I did write in a piece titled,

Big Money and the Big Lie:

“The important take-away from the picture above is that the US dollar is now on the vertical growth part of its “life curve”.  Naysayers might argue, “money growth is not increasing at a vertical rate because the Fed stopped QE [Quantitative Easing] a number of years ago”.

Perhaps the Fed did “technically” stop QE a number of years ago, BUT, the folks at the Fed are well aware of the facts regarding the life cycle of fiat money depicted above.  They know if the money is not created, the financial system [US Dollar] collapses onto itself.  So what gives?

Instead of the vertical nature of the money growth chart above, the Fed would like us to believe that money growth is better reflected by their more sanguine “official” count depicted below: 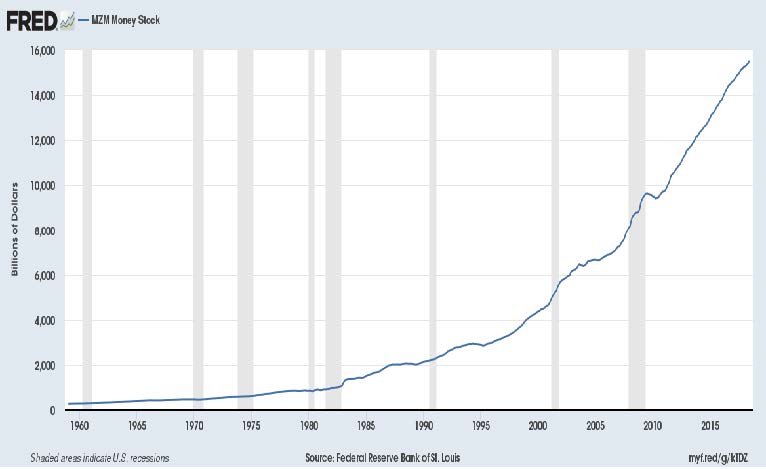 Do remember folks, the chart above reflect the “officially acknowledged money supply”.  The growth rate does not appear to be vertical, does it?

But what about the fraudulently created, missing 21 TRILLION identified by Dr. Mark Skidmore [PhD. Michigan St.] and Catherine Austin Fitts [former undersecretary of HUD – Bush 1 Admin]?  This money is not acknowledged to exist and IS NOT part of the official monetary aggregate data depicted above.  If one was to “add” the missing 21 Trillion to the 16ish Trillion depicted above – the growth rate would INDEED BE VERTICAL.

So folks, while the Fed may be able to legally claim that QE ended years ago, the REQUIRED monies have been created and they have been silo-ed in places like the ESF [EXCHANGE STABILIZATION FUND].

“The U.S. Exchange Stabilization Fund was established at the Treasury Department by a provision in the Gold Reserve Act of January 31, 1934. 31 U.S.C. § 5117. It was intended as a response to Britain’s Exchange Equalisation Account.[2] The fund began operations in April 1934, financed by $2 billion of the $2.8 billion paper profit the government realized from raising the price of gold to $35 an ounce from $20.67. The act authorized the ESF to use its capital to deal in gold and foreign exchange to stabilize the exchange value of the dollar. The ESF as originally designed was part of the executive branch not subject to legislative oversight.”

The web page devoted to the ESF claims that it contains only roughly 100 billion US dollars but then again, it is NOT SUBJECT TO LEGISLATIVE OVERSIGHT, so who really knows?  We also know that the ESF was created to protect the dollar.  We also know that 21 Trillion US dollars are unaccounted for.  We also know that money growth matter-of-factly is greater than what is reported – because it MUST BE.  It is not a stretch to figure the existence of this “dark money” is the real reason why US Government Bond auctions have NEVER failed, despite the reluctance of America’s traditional financiers to purchase record amounts of additional US government debt.

So folks, while the Fed may be able to say they are not directly engaged in QE, the US Treasury [ESF] IS and has been for some time – because they MUST.  Additionally, the Fed necessarily was complicit in assisting the ESF in creating the dark money.

This is why the Fed will never be audited and this is also why,

“In an apparent departure from ‘generally accepted accounting principles,’ federal agencies will be permitted to publish financial statements that are altered so as to protect information on classified spending from disclosure…

It’s all part of the BIG LIE, ladies and gentlemen.”

A reminder ladies and gentlemen, this [above] is what I wrote back in August of 2018.  Now, as everyone knows, the have been multi-trillions of dollars committed and created in response to the Pandemic crisis.  Coincidentally, if you believe in coincidences, 4 months after publishing the piece above [Jan., 2019] I was hospitalized in critical care for 5 weeks with a mysterious respiratory ailment [double pneumonia and blood clots on my lungs] that presented EXACTLY like Covid-19.  I was lucky to have lived.

Without a virus, humanity would NEVER have put up with this kind of money creation.  Now that the bogey man has appeared and everyone is in “lockdown” in their homes – they want to be paid and will not only tolerate but are WELCOMING the money creation – so long as the fridge is full and Netflix keeps working – the modern day equivalent of bread and circus [Coulisse anyone?] of Roman times.  We even have the modern day currency debasing equivalent of coin clipping occurring – excessive money printing – showing that while history doesn’t necessarily repeat, it certainly does rhyme.