This is the most powerful and important edition of Tucker Carlson Tonight ever broadcast. Tucker methodically reviews the JFK assassination, the Warren Commission and indicts CIA involvement in the assassination.

Tucker even touches upon the role of CIA psychiatrist Jolly West in these proceedings with Jack Ruby. It was reported that West later made twelve or more visits to Timothy McVeigh while he was incarcerated for the Oklahoma City bombing of the Alfred P. Murrah Federal Building. Dr. Louis Jolyon West, the UCLA mind control expert for the CIA who pronounced Jack Ruby insane after he suggested a conspiracy in the JFK assassination was also was the government psychiatrist who handled Sirhan B. Sirhan while he awaited trial for the murder of Robert Ke)nnedy.

Tucker and journalist Miranda Devine also savagely indict ongoing CIA leadership for decades of lying and duplicity in numerous despicable and deplorable events and activities, up to the current war in Ukraine. The rest of show is a detailed catalog of corruption at every level of government.

Not long after Jack Ruby shot Lee Harvey Oswald on camera in the basement of Dallas police headquarters, a lot of Americans started to have some questions about the Kennedy assassination. It was, you’d have to admit, a pretty extraordinary sequence of events. A lone gunman murders the president of the United States. And then, less than 48 hours later, that lone gunman is himself murdered by another lone gunman.

So less than a year after the JFK assassination, the Johnson White House released something called the Warren Commission Report. And the report concluded that while their motives remained unclear, both Lee Oswald and Jack Ruby had acted alone. No one helped them. There was no conspiracy of any kind. Case closed. Time to move on.

And many Americans did move on. At the time, they had no idea how shoddy and corrupt the Warren Commission was. It would be nearly 50 years before the CIA admitted under duress that in fact, it had withheld information from investigators about its relationship with Lee Harvey Oswald.

But even then, at the time, before that was known, the government’s explanation didn’t seem entirely plausible. And some people started asking obvious questions about it. It was at that point, as Americans started to doubt the official story, that the term “conspiracy theory” entered our lexicon. As Professor Lance DeHaven-Smith points out in his book on the subject, “The term conspiracy theory did not exist as a phrase in everyday American conversation before 1964. In 1964, the year the Warren Commission issued its report, the New York Times published five stories in which ‘conspiracy theory’ appeared.”

Now, today, of course, the term “conspiracy theory” appears in pretty much every New York Times story about American politics. It’s wielded, now as then, as a weapon against anyone who asks questions the government doesn’t feel like answering. But despite 60 years of name-calling, those questions have not disappeared. In fact, they have multiplied with time.

And here’s one of them. In April of 1964, a psychiatrist called Louis Joylon West visited Jack Ruby in his isolation cell in a Dallas jail. According to West’s written assessment, he found that Jack Ruby was “technically insane” and in need of immediate psychiatric hospitalization. Those are conclusions that puzzlingly no one who had spoken to Jack Ruby previously had reached. Ruby had seemed perfectly sane to the people who knew him. Louis Jolyon West pronounced him crazy.

But what West did not say was that he was working for the CIA at the time. Louis Jolyon West was a contract psychiatrist for the spy agency. He was also an expert on mind control and a prominent player in the now infamous MKUltra program in which the CIA gave powerful psychiatric drugs to Americans without their knowledge.

So of all the psychiatrists in the world, what in the world was this guy doing in Jack Ruby’s prison cell? The media did not seem interested in finding out. In fact, the New York Times, in an extensive 1999 obituary of West, never mentioned the fact that he had worked for the CIA, much less his time in Jack Ruby’s cell, which seems relevant. So you can see why non-crazy people would wonder about what really happened. And of course, many have wondered.

In 1976, long forgotten, the House of Representatives impaneled a special committee to reinvestigate the JFK assassination. Their bipartisan conclusion? Jack Kennedy was almost certainly murdered as the result of a conspiracy. But the question is a conspiracy by whom? Well, the obvious suspect would be the CIA. Why else would the agency withhold critical evidence from investigators? Is there a benign explanation for that, for maintaining this level of secrecy for this many years? Not that we’re aware of. And it is illegal.

In 1992, Congress passed the President John F. Kennedy Assassination Records Collection Act. That act mandated full disclosure of all documents by 2017, 54 years after JFK was killed. The last administration promised to comply fully with that law. But under intense pressure from CIA Director Mike Pompeo, withheld, in the end, thousands of pages of CIA documents.

Today, this afternoon, the Biden administration did exactly the same thing. That would be thousands of pages of documents after nearly 60 years, after the death of every single person involved. But we still can’t see them. Clearly, it’s not to protect any person. They’re all dead. It’s to protect an institution. But why?

Well, today we decided to find out. We spoke to someone who had access to these still hidden CIA documents, a person who was deeply familiar with what they contained. We asked this person directly, “Did the CIA have a hand in the murder of John F. Kennedy, an American President? And here’s the reply we received verbatim. Quote, “The answer is yes. I believe they were involved. It’s a whole different country from what we thought it was. It’s all fake.”

It’s hard to imagine a more jarring response than that. Again, this is not a “conspiracy theorist” that we spoke to. Not even close. This is someone with direct knowledge of the information that once again is being withheld from the American public. And the answer we received was unequivocal. Yes, the CIA was involved in the assassination of the president. Now, some people will not be surprised to hear that they suspected it all along. But no matter how you feel about it or what you thought about the Kennedy assassination, pause to consider what this means.

It means that within the US government, there are forces wholly beyond democratic control. These forces are more powerful than the elected officials that supposedly oversee them. These forces can affect election outcomes. They can even hide their complicity in the murder of an American president. In other words, they can do pretty much anything they want. They constitute a government within a government mocking, by their very existence, the idea of democracy. As cynical as we have become after 30 years of watching government officials ignore the voters who employ them, we were shocked to learn this. It’s not acceptable. 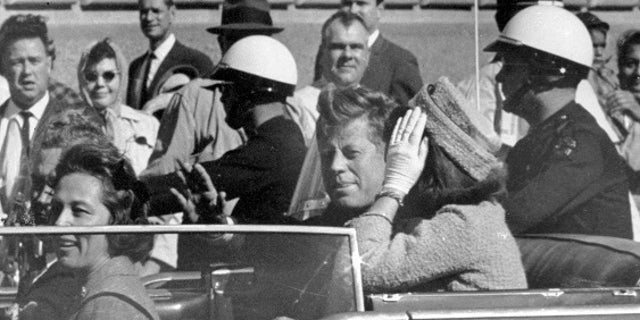 John F. Kennedy waves from his car during the motorcade in Dallas before he was shot and killed. (AP)

Americans have trusted their government less with every passing year since the killing of John F. Kennedy. Maybe this is why. And people have known this for a long time. The people who knew would include every director of the CIA since November of 1963. And that list would include Obama’s CIA director, John Brennan, one of the most sinister and dishonest figures in American life.

That list would also include, we are sad to say, our friend Mike Pompeo, who ran the CIA in the last administration. Mike Pompeo knew this. We asked Pompeo to join us tonight, and though he rarely turns down a televised interview, he refused to come. We hope he will reconsider.