SM: …’The best defence is a good offence’…can you say Hunter Biden?….

Taibbi: Welcome To The Third World

[The Justice Department] must immediately explain the reason for its raid and it must be more than a search for inconsequential archives, or it will be viewed as a political tactic and undermine any future credible investigation and legitimacy of January 6 investigations.

Headline from Politics Insider this morning:

We’ve reached the stage of American history where everything we see on the news must first be understood as political theater. In other words, the messaging layer of news now almost always dominates the factual narrative, with the latter often reported so unreliably as to be meaningless anyway. Yesterday’s sensational tale of the FBI raiding the Mar-a-Lago home of former president Donald Trump is no different.

As of now, it’s impossible to say if Trump’s alleged offense was great, small, or in between. But this for sure is a huge story, and its hugeness extends in multiple directions, including the extraordinary political risk inherent in the decision to execute the raid. If it backfires, if underlying this action there isn’t a very substantial there there, the Biden administration just took the world’s most reputable police force and turned it into the American version of the Tonton Macoute on national television. We may be looking at simultaneously the dumbest and most inadvertently destructive political gambit in the recent history of this country.

The top story today in the New York Times, bylined by its top White House reporter, speculates this is about “delayed returning” of “15 boxes of material requested by officials with the National Archives.” If that’s true, and it’s not tied to January 6th or some other far more serious offense, then the Justice Department just committed institutional suicide and moved the country many steps closer to once far-out eventualities like national revolt or martial law. This is true no matter what you think of Trump. Despite the early reports of “cheers” in the West Wing, the mood in center-left media has already drifted markedly from the overnight celebration. The Times story today added a line missing from most early reports: “The search, however, does not mean prosecutors have determined that Mr. Trump committed a crime.” There are whispers throughout the business that editors are striking down certain jubilant language, and we can even see this playing out on cable, where the most craven of the networks’ on-air ex-spooks are crab-crawling backward from last night’s buzz-words:

The hugeness of the story has become part of its explanation. An action so extreme, we’re told by expert after expert, could only be based upon “pulverizing” evidence.

Throughout the Trump years we’ve seen a numbing pattern of rhetorical slippage in coverage of investigations. The aforementioned Politics Insider story is no different. “Likely” evidence in the headline becomes more profound in the text. An amazing five bylined writers explain:

Regardless of the raid’s focus legal experts quickly reached a consensus about it: A pile of evidence must have backed up the warrant authorizing the search.

They then quoted a “former top official in the Justice Department’s National Security Division” — you’ll quickly lose track if you try to count the named and unnamed intel spooks appearing in coverage today — who said, “There’s every reason to think that there’s a plus factor in the quantum and quantity of evidence that the government already had to support probable cause in this case.”

Politico insisted such an action must have required a magistrate’s assent “based upon evidence of a potential crime.” CNN wrote how authorities necessarily “had probable grounds to believe a crime had been committed,” while the New York Times formulation was that “the F.B.I. would have needed to convince a judge that it had probable cause that a crime had been committed.” Social media was full of credentialed observers explaining what must be true. “The affidavit in support of the MAL search warrant must be something else,” said Harvard-trained former Assistant U.S. Attorney Richard Signorelli, one among a heap of hyperventilating names:

It’s amazing how short our cultural memory has become. Apparently few remember all the other times this exact rhetoric was deployed in the interminable list of other Trump investigations, only to backfire later. Does anyone remember this doozy?

If there were any question as to whether or not the FBI raid on Donald Trump’s Mar-A-Lago residence was rife with corruption, details from the search warrant authorizing it should clear any doubt. Although information is sparse given that the warrant remains under seal, one piece of information that couldn’t be kept confidential sheds new light on the motives behind the raid.

The judge who signed off on the search warrant was Bruce E. Reinhart, United States Magistrate Judge for the Southern District of Florida. Before assuming his office as a federal judge, Reinhart was an attorney who represented associates of Jeffrey Epstein implicated in his human trafficking conspiracy, namely; Sarah Kellen and Nadia Marcinkova.

Kellen worked for Epstein as his scheduler for years and was referenced in deposition testimony given during the defamation case between Virginia Guiffre and Ghislaine Maxwell. Marcinkova was a more prominent member of Epstein’s entourage as she served as one of the pilots of his infamous aircraft dubbed “The Lolita Express.”

Reinhart assumed his role as Kellen and Marcinkova’s attorney once he set up a criminal defense firm after resigning from his post as a senior prosecutor in the Southern District of Florida as it was negotiating a non-prosecution agreement for Epstein. Reinhart would officially begin his legal representation of Epstein’s accomplices within days of leaving his position as a senior prosecutor within the district.

While Reinhart’s association with Epstein hadn’t resurfaced until his was thrust back into the spotlight as the Federal Magistrate who authorized the search warrant for the Mar-A-Lago raid, it was a matter of considerable controversy in the wake of his resignation in 2007. In 2013, the US Attorneys states that “while Bruce E. Reinhart was an assistant U.S. attorney, he learned confidential, non-public information about the Epstein matter.’’ in response to his claims against any impropriety. Reinhart’s rejection of any wrongdoing on his part was made in a 2011 affidavit as part of a civil court case filed by two of Epstein’s victims in 2008 which named Former Secretary of Labor Alexander Acosta along with two other federal prosecutors, one of whom was Reinhart.

Reinhart’s representation of Marcinkova best conveys his ties to the human trafficking enterprise that Epstein and his network assembled. Marcinkova is presently the Founder and CEO of Aviloop. The company’s website states that it harnesses Marcinkova’s experience as a pilot for the consulting firm’s focus on companies based in the aviation industry. Marketing, social media services, and event management are listed among the services which are offered. As is an explicit mission to “help employers diversify their crews.”

While the Aviloop website is rather innocuous, other than the fact that it is operated by an associate of Jeffrey Epstein’s, its YouTube Channel portrays a different image. The YouTube channel is sparse, containing only 4 videos, each of which were posted 8 years ago from the date of this article and only has 34 subscribers. Yet, the content of the videos is suspicious even with the low volume made available. Each video is a brief, 40 second or so monologue from a young woman dressed in a suggestive, pilot-themed outfit. Their sultry voices attempt to entice potential customers into a membership with Aviloop whether they are looking for deals on pilot training courses, aviation services or simply want to “see more girls like me.” Oddly enough, memberships with Aviloop are completely free according to the promotional video.

No direct contact information for Aviloop is disclosed on the company’s website. However, the website of Aviloop’s sister company, Aviatri, listed a phone number. However, upon this being brought to light in an investigative report of mine which Marcinkova and Mark Esptein became aware of, the phone number was removed from the site.

Within days the Aviatri site was listed as “under construction,” though a simple redirect to the URL of its homepage showed it was still operational. When this was brought to Marcinkova’s attention by me, she removed the site all but entirely, only leaving its placeholder page in its place. The physical address mentioned on the Aviloop website belonged to a building managed by Ossa Properties, a property management company owned by Jeffrey’s brother Mark Epstein 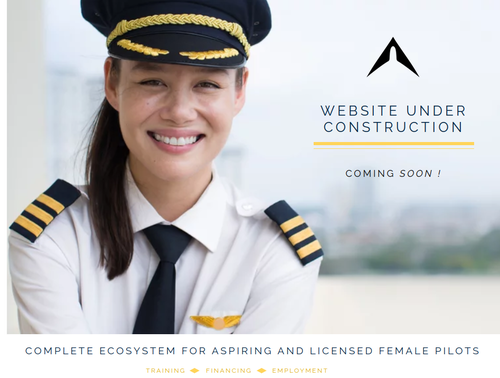 The automated voicemail for Aviatri states that callers have reached actually reached Aviloop. Delineating between the 2 businesses is difficult as Aviatri does not appear to be incorporated with the New York Department of State’s Division of Corporations like Aviloop is. Aviatri extends the mission of Aviloop to aspiring female pilots directly by acting as a recruiting agency for them. The agency’s website states that it offers online courses, flight training, and financing to aspiring female pilots.

Marcinkova’s other business, Global Girl, LLC, had its incorporation with the New York Department of State’s Division of Corporations completed in 2005, years preceding Aviloop’s establishment at a time when Marcinkova was in the midst of her association with Epstein. Unlike Aviloop, Global Girl does not appear to currently maintain a website. Its social media channels have all been deactivated as well. A vague reference to Global Girl is mentioned on Marcinkova’s personal website before listing herself as a pilot, fashion model, and the CEO of Aviloop. As such, it is unclear if the company is still operating or even what the basis of its operations entail. The business entity’s filing with the New York Department of State  was sent to Adam B. Kaufman & Associates, PPLC at 585 Stewart Avenue in Garden City, NY. Kaufman & Associated  has not responded to a message regarding an inquiry into the businesses current operational status or a means by which to contact Ms. Marcinkova.

What is known about Marcinkova is how deeply enmeshed she was with Jeffrey Epstein, Ghislaine Maxwell, and the crimes they committed. Consequently, Reinhart was likely well-aware of those crimes given his representation of Marcinkova and Kellen on top of his position as a federal prosecutor in the district which tendered Epstein with a non-prosecution agreement. While his decision to leave the office could have been construed as a rejection of its decision to sweep Epstein’s crimes under the rug, his position as Marcinkova’s attorney shows that he was likely more concerned with maximizing his benefit in committing the cover up.

If Reinhart’s association with the likes of Marcinkova and Kellen reveals anything, it is that the inner machinations of Jeffrey Epstein’s human trafficking network live on, even if he does not. The permutations of insulating those involved with Epstein have resulted in the very people who enabled, if not outright participated in his crimes, be rewarded for their efforts by being placed in the highest echelons of federal government. The exposure of that fact should shake those institutions to their core. This is a daunting reality that those who would be brought down with the ship know all too well. The mere premise of that foreboding future is enough to explain why the Southern District of Florida has removed any contact information for Reinhart entirely from his website – an act which serves as a tacit admission of the blatant corruption behind the search warrant he signed off on.