As sanctions fail and Russia advances, Western media changes its tune on Ukraine

Even as the collective West continues to insist – against all observable reality – that the conflict in Ukraine is going well for Kiev, major media outlets are becoming increasingly uneasy with the situation on the economic front. More and more observers are admitting that the embargoes imposed by the US and its allies aren’t crushing the Russian economy, as originally intended, but rather their own.

Meanwhile, major publications have begun to report on the actual situation on the frontlines, rather than uncritically quoting myths like the ‘Ghost of Kiev’ or ‘Snake Island 13’ propagated by Volodymyr Zelensky’s office, as they did early on. There have even been hints, however timid, that the West should perhaps stop unconditionally supporting Kiev and promote a negotiated peace instead.

(Also Read: The So-Called ‘War of Attrition’ Is Stacked Up in Russia’s Favour. And Kissinger Knows It – By Martin Jay @ https://www.strategic-culture.org/news/2022/06/05/so-called-war-of-attrition-stacked-up-in-russia-favour-kissinger-knows-it/)

“Russia is winning the economic war,” the Guardian’s economics editor Larry Elliott declared on Thursday. “It is now three months since the west launched its economic war against Russia, and it is not going according to plan. On the contrary, things are going very badly indeed,” he wrote.

Elliott actually argues that the recent US announcement of sending rocket launchers to Ukraine is proof that sanctions are not working: “The hope is that modern military technology from the US will achieve what energy bans and the seizure of Russian assets have so far failed to do: force [Russian President Vladimir] Putin to withdraw his troops.”

In a May 30 essay, Guardian columnist Simon Jenkins also said that the embargo had failed to force a Russian withdrawal, but argued the EU should “stick to helping Ukraine’s war effort” instead, while withdrawing the sanctions because they are “self-defeating and senselessly cruel.”

As Jenkins points out, the sanctions have actually raised the price of Russian exports such as oil and grain – thus enriching, rather than impoverishing, Moscow while leaving Europeans short of gas and Africans running out of food.

Note that Jenkins is wrong about the supposed effectiveness of Western weapons, given that Russian and Donbass troops have won a series of victories over the past month – from Popasnaya to Liman. On May 26, the Washington Post of all places published a shockingly frank account of how one Ukrainian unit lost more than half its strength near Severodonetsk and retreated to the rear. Its commanders actually got arrested for treason after speaking to the US outlet.

This reality couldn’t be ignored by even the Telegraph’s defense editor, Con Coughlin, who’s become somewhat of a meme for prophesying Russian defeat on a weekly basis. He is now saying Moscow might pull off a “shock triumph” – albeit in service of his argument that Kiev needs even more weapons. 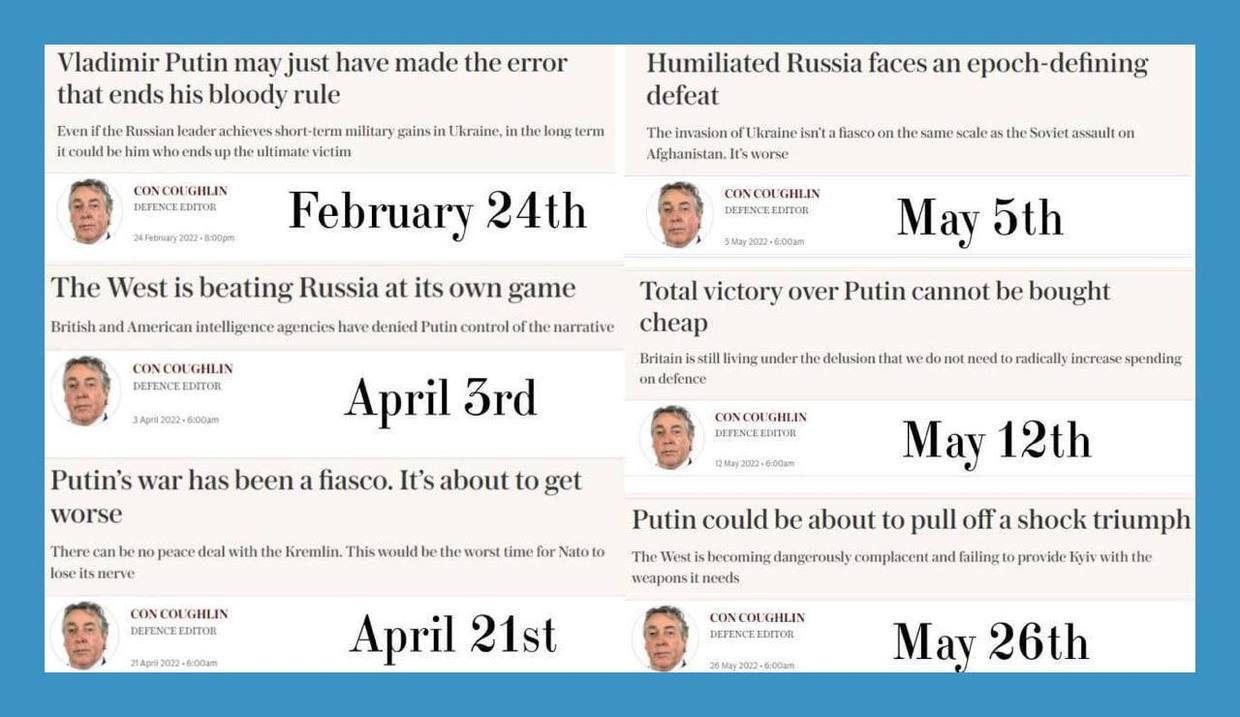 The collective West’s failure to break Russia was apparent even to The Economist, not exactly a publication sympathetic to Moscow. The newspaper reluctantly admitted a month ago that the Russian economy had bounced back from the initial sanctions shock. Meanwhile, it’s the West that has to deal with energy shortages, spiraling costs of living, and record inflation. It’s Americans, not Russians, who can’t find baby formula in stores and can’t afford gas.

Perhaps that’s why this “spring of discontent” with the Western sanctions policy hasn’t been confined to the European side of the Atlantic. On Tuesday, the New York Times ran an op-ed by Christopher Caldwell in which he criticized the Biden administration for “closing off avenues of negotiation and working to intensify the war” by sending more and more weapons to Kiev.

“The United States is trying to maintain the fiction that arming one’s allies is not the same thing as participating in combat,” Caldwell wrote, pointing out that this distinction is getting “more and more artificial” in the information age. A day later, the head of the US Cyber Command admitted to conducting offensive operations against Russia on Ukraine’s behalf.

The US has “given Ukrainians cause to believe they can prevail in a war of escalation,” Caldwell wrote, which is why Kiev isn’t eager to make peace. Indeed, when none other than Henry Kissinger tried to argue in Davos for settling the conflict quickly, Zelensky’s office cursed him out. He was soon designated an enemy of the Ukrainian state.

There have been calls for an off-ramp to the war even earlier – though few and far between, and lost amid the ongoing cacophony of media cheerleading for Kiev. Back on May 18, the usually hawkish Charles Kupchan of the Council of Foreign Relations advised Ukraine in the pages of The Atlantic to “take the W,” so to speak.

“Russia has already been dealt a decisive strategic defeat,” he wrote. “For NATO and Ukraine alike, strategic prudence argues in favor of pocketing these successes rather than pressing the fight and running the tantamount risks.” NATO, Kupchan added, should advise the Ukrainian government on how to end the bloodshed, and soon.

The very next day, the New York Times’ editorial board echoed his argument, saying a decisive Ukrainian victory over Russia was “not a realistic goal” and that US President Joe Biden should tell Zelensky that there is a limit to which the US will go.

“It is imperative that the Ukrainian government’s decisions be based on a realistic assessment of its means and how much more destruction Ukraine can sustain,” they wrote.

Judging by the official statements coming from both the White House and Kiev, however, the conversation Kupchan and the NYT advised never took place. Instead, the US continues to give Ukraine a blank check, of the kind Germany offered to Austria-Hungary in 1914.

Speaking of First World War analogies, a senior political scientist at the RAND corporation – a think-tank advising the Pentagon – made one in Foreign Affairs on Tuesday. According to Samuel Charap, the creation of Belgium as a neutral state by its neighbors was to everyone’s benefit for almost a century, with Britain willing to fight Germany in 1914 to preserve it. The neutrality arrangement proposed at the talks in Istanbul in late March could provide Ukraine with the same thing, he said.

Too bad, then, that British Prime Minister Boris Johnson had personally intervened to scuttle those talks back in April, telling the Ukrainians that if they wanted to make a deal with Moscow, the collective West did not.

Jonas E. Alexis, Assistant Editor – Has degrees in mathematics and philosophy. He studied education at the graduate level. His main interests include U.S. foreign policy, the history of the Israel/Palestine conflict, and the history of ideas. He is the author of the new book, Kevin MacDonald’s Metaphysical Failure: A Philosophical, Historical, and Moral Critique of Evolutionary Psychology, Sociobiology, and Identity Politics. He teaches mathematics in South Korea.