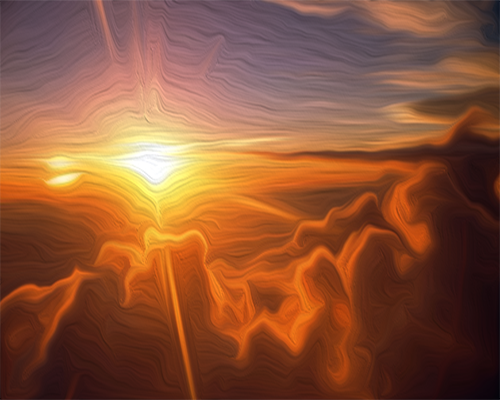 “The Kingdom of Heaven is Within you and It Begins where Your Feet Touch the Earth.”

I know there are many people, especially in the organized religions, who imagine they are going to some Heaven, upon their departure from this plane of existence. The more and more pronounced materialism gets, the more backwards and upside down the general understanding and values trend. The body is the least important aspect of our being and that part most celebrated, in time of material darkness, which is why sybaritic and hedonistic behavior becomes so pervasive. When a culture reaches a certain stage, it begins to kill itself. It commits suicide. I’ve seen no exceptions to this. The way it usually kills itself, is through excess, dissipation, sexual perversity and chemical poisoning. Aberrant and undisciplined lifestyles result in epidemic health concerns and it is all round to be seen.

“there is a great distance between the power that removes the invisible causes of disease and which is magic and that which causes merely external effects to disappear and which is Physic, Sorcery and Quackery.”

Many will quibble about his use of ‘magic’. What he means by this term is not what it is generally understood to mean, in these times.

Disease is not natural and one must become diseased in their mind for it to take place. Health is, at all times, an indication of harmony in the body(s). Spiritual and psychological causes are at the root of all maladies. Present day practitioners of medicine are as misinformed and deluded as at any time previously. The native witch-doctor is more in tune with the essentials of healing than is your generic MD. The witch-doctor knows about the curative power of the mind and his mumbo jumbo routines are directed at awakening that power. It can be an eyeopening experience when one delves a little deeper into primitive modalities. The use of sound and color in the healing arts was well known to the ancients but all of these techniques were purged from the common mind long ago. Now the science is adapted to the profit of the practitioners.

Just as both disease and healing are products of the mind, so are Heaven and Hell. You do not depart anywhere when you leave here, except to a place that you already are. You are that Heaven or Hell you envision. What changes upon death is that the physical body is no longer the medium of experience. Thoughts and feelings become actual things on The Other Side. This is a wonderful Truth for some and the worst possible result for others. A little thought invested in speculation upon what is implied here, will produce some startling insights.

You are a vibration and you will gravitate (literally) to kindred spirits. If you were a combative and disagreeable person while you were here, you will find yourself at a gathering of like entities. Whatever the greater part of you was invested in is going to materialize around you. The physical locations of Earth, transform into astral provinces called Lokas. According to Vedic tradition we are in bhu-loka here BUT not everyone is. Some who are resident here are actually resident in higher locations, even though they appear to be here. Tradition holds that there are seven lokas above the one we inhabit (temporarily) here and seven lokas below. The higher ones are populated by divine beings and other luminous entities. The soul provides its own light. The lower levels are populated by demons and adversaries. Every single one of us will find out if what is said here is true. Maybe it’s not. Even though all the informed sources about what awaits hereafter are more or less in agreement; only differing in descriptive detail… maybe they are all wrong. It’s possible. It’s highly unlikely but… it’s possible.

Some of the planes of being are more composed of feeling. At a higher level it is a mental plane and thoughts predominate and… there are also locations above that. The Tibetan Wheel of Life gives a particular graphic of the entire.

There are more versions of that than you will ever desire to see. Of course, each tradition will out picture the details of the realm, according to its own flavor. Suffice to say that there are planes of being that are rarefied beyond any possibility of description. Only experience is equal to the task. There are also locations that are darker and more frightening than can be accurately described. It might be useful to point out that there are people in all of these locations at this very moment. Here’s what can happen if you stay in any position too long. (grin)

On the other side… you feel things and you think things into being. Once again, this can be very good or very bad. If one is capable of objective awareness, concerning both sides of life, from the physical to the non physical, to the physical and then the non-physical, again and again and again, round and round and round, it will become profoundly clear that control of the mind and the origin of feeling should be the PRIMARY CONCERN of everyone. If you can accomplish this… and people have and people will, you can write your own ticket at every level of the dance. This is my own personal target of attention, that and the permanent opening of the heart to express The Great Love.

It is truly stated that Heaven is a state of mind. Heaven begins where your feet touch the Earth. We hardly study or look more deeply into the people all around us, unless we want something from them. They are incidental features of the environment. We give even less attention to looking more deeply into ourselves. IF we were so moved, we would discover and learn remarkable truths. Unfortunately, in times of Material Darkness, all of our attention is on externals and it is filtered through the lens of our desires and appetites; pedestrian trivialities. Not only can we find Heaven within but… we can share it with one another. It’s not mentioned much in these times because the press of the overlords upon our consciousness is directed toward submission and control. They care not a bit for our greater awakening. Thankfully, the force of the apocalypse is much greater than the transitory controls they have exercised for too long. Their day is at hand.

Here are a couple of brief but delightful forays into American culture from bygone times. No doubt both of these would be sneered at as White Privilege now. Look at the beauty of the faces and the light that somehow transmits now and again.

Of course, some of it is also funny and some awkward and embarrassing; that’s life.

If a person were to put the greater portion of their attention upon the indwelling Lord of All Things, after a preliminary period of testing, they would find that our awareness begins to elevate progressively, into finer and finer planes of being but it is next to impossible to tell anyone about it and even harder to get them to pay attention. There is something in the human mind that rebels against the promise of its own freedom and when the liberator arrives, often enough, they will entangle their arms round the bars of their cell to avoid being freed. One can ONLY leave the tracks of their passage, as a guide, should anyone ever be moved to inquire afterwards and… that does happen; tracks were left for me and I am grateful beyond expression for that.

Such a paradise of never ending bliss and joy is available for the intrepid voyager who sticks to their course. It should be noted that those who miss after almost winning, should have known what was involved from the beginning. It takes everything. Otherwise… seriously, don’t bother. The sad truth is that you give up nothing of importance and don’t miss it once it is gone. In many cases you hardly lose anything anyway, because you had no great investment in it. It is only when it painfully tears at the separation-line that you need to have a clue what that means.

The most basic human drive is the one for Freedom. It is greater than any other and the liberator is one’s own true self, now concealed beneath the overlay of the deception of appearances. It is as if one put a mirror out of doors and left it there. In no great amount of time, enough dust would cover it that the image could not be seen. One source says 60 tons, another says 100. I had heard it was 400 tons of dust that lands on the Earth every day. Hell is oft associated with heat. This implies objects/matter pressed together. Compression creates heat. Look to the cities for your metaphors. Heaven is associated with a wide expanse, like that of the physical heavens. It should come as no surprise who resides in the Himalayas and who resides in NYC, Beijing, Mexico City and New Delhi.

Love is an ever expansive force. It is an ever refining force. It is an ever liberating force. God is the source of Love and he takes human form at regular intervals to set existence right, after it has gone sideways. Love charges every particle of your being. Let us say that it can do so. You can, through the power of Love, transform your body into a body of light. You have one already.

I’ve wandered the dirty streets of this world and I’ve fallen into the murk and tasted its many corruptions. No mas!!! No mas!!! The thrill is gone. I’ve no attraction for it anymore. It’s been burned out. The radiant splendor of the almighty lies before us all, once we have had our fill of carrion and dead bodies; once we have tasted the Ambrosia of the Gods, all terrestrial comestibles pale by comparison. I look back upon my own reckless nature and the ignorance of my behavior in times past and can only shake my head.

Here is what modern culture has reduced its resident to.

If people knew what wonders lay within, they would give it all the intensity of passion they could garner to the task. I am daily astounded by the synchronicity that manifests when one comes into harmonic accord with their own true nature. Real magic, the divine magic of life itself, stripped of all artifice and deception, blooms in every moment where before it passed unseen. How does one possibly express the beauty that is everywhere to be found? One is rendered mute. One can only watch and experience in silent appreciation and it gets better, can get better, with every passing moment.