Phase Change: Moving into a New Space of Existence

Get the latest Waking Times articles delivered to your inbox. Sign up here.

‘The Abyss has been looking into us for long enough. It is time for us, after becoming as spiritually grounded and metaphysically well-informed as possible, to begin looking back into it, and so come to a deeper understanding of exactly what is being done to us – and maybe even who is doing it.” ~ Charles Upton

I recently spoke about leaving an obsolete system behind and moving into the energetic space where a new system can emerge. Grand systemic shifts occur as one cycle draws to a close, allowing for a new phase to come into existence. As this happens, the older environment (reality structure) stagnates – the result, in this case, is a deeper fall into materialism, which if continues, eventually comes to a point of fracture. A deepening material reality appears to create a cut off from subtler planes of being and connection. Yet no matter how this feels, it is metaphysically impossible. It is a time, however, for people to become as ‘spiritually grounded and metaphysically well-informed as possible,’ as stated by Charles Upton. Why? Because the illusion of ordinary life is fast breaking down.

In these times when there is a ‘phase change’ – from one phase to another – there is greater vulnerability for fragmentation to appear in the dominant reality structure. Some traditions have referred to these as ‘cracks in the veil.’ I have used the term consensus reality meltdown.[i] It appears that at this juncture in our civilizational path, there is a deliberate attempt to diminish our sense of reality – to make people more suggestible and open for programming. Also, to create a psychic numbness and fear. I sense that there is a parallel ‘reality system’ being put into place that presents a false ‘solidification of the world’ through a deliberate push for greater materialistic beliefs and faith in technological solutions. Again, this ‘solidification’ is a façade that hides the ‘fissures’ that are opening up in our societies and through which psychic forces are pushing their way through. It is critical now that we each maintain a mental balance as we move forward. Also, it is important in these times that we neither stagnate nor fall too much into the uncertainties of chaos: it is now the fine line we seek between these extremes of solidification and stagnation, and chaos and fear. As always, we are called upon to find the straight path between the maelstrom of distraction and dissonance.

The Mother (the spiritual companion of the Indian sage Sri Aurobindo) once drew an image for a student who asked her to describe the best path to take in their developmental work. The Mother drew a squiggle, and then a straight line through it. We should aim to be on the straight path, she replied. This is a photo of her image: 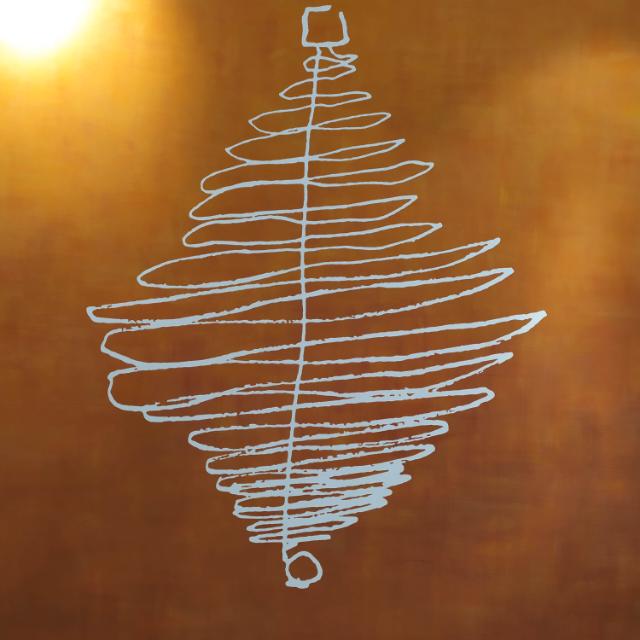 (Photo taken at Auroville, India, by the author)

The power that others have over us depends on how far we stray from our own inner dependency – our own ‘straight path’ that lies within. This is the path of our frequency – is it a squiggle or a straight line? We must answer for ourselves.

We are each more than we have been conditioned to think and believe. It is true that we have been held back by our own imposed limitations. Those limitations were part of a previous time. We are in the midst of a new historical moment (and I don’t wish to sound dramatic!)

The human transformation, including our social and cultural systems, will only come about from having a realization of the situation we are in. And this includes a realization and perception of ourselves. If we continue to act and behave from the same patterns, then how can we expect to break this continual chain of conditioned limitations? This is how the status quo maintains itself, from perpetuating the same patterns that keep it in place. Any awakening to the perceptual programming we have been under will activate the ‘guardians of falsehood’ – or, rather, the modern-hooded Inquisition against Truth. This modern Inquisition – similar to the religious Inquisition of the Middle Ages – will seek out to suppress any voices of contention against the dominant narrative. Yet, I suggest, we must now have faith in ourselves to speak our own truths. And speaking one’s truth usually fuels our own transformation. Upon this shifting ground, change (one way or another) is inevitable.

Change may be uncomfortable at first. This is the energy felt when old patterns are broken in order to be replaced by the new. There are always those people who prefer to deny these changes, and there is great shame in this:

it is much easier to sit back down and numb-out again because people are so afraid to feel, to love, and to live. What a shame! If only they knew that – wow – this is what I can do. I feel hurt but in this I am alive, I am here, I am participating. Such beauty in this realization.[ii]

There is much to be said about this form of participation in life – participation in the changes. Genuine human community is wishing for us to form new connections and to come together through this. This is what the social body is for: it is a body that needs for its limbs to work together, harmoniously, and in unity. The human being is a vibrational part of this communication flow: ‘the heart is the connector vibrationally and the head is the receiver – just like a phone line. If these are both open to receive then it will be that way.’[iii]

The energy of unity amongst us is powerful; so powerful that it could successfully energize a new form of human civilization to emerge. First, however, change is coming. People are already feeling the discomfort of this. And for many people, this ‘change’ is bringing great challenges and forcing them to make life-changing decisions. In whatever way, something huge is coming that will compel people to make their choices – and to stand by those choices. For my part, I would want nothing more than to be on the right and noble side of human history. Let each person make their decisions with conscious awareness, comprehension, and perceptual understanding. Let us go forth and make 2022 a year for humanity.

Kingsley L. Dennis is the author of The Phoenix Generation: A New Era of Connection, Compassion, and Consciousness, andThe Sacred Revival: Magic, Mind & Meaning in a Technological Age, available at Amazon. Visit him on the web at http://www.kingsleydennis.com/.

[i] See my book Hijacking Reality: The Reprogramming & Reorganization of Human Life

One thought on “CROSSROADS: ‘Consensus Reality Meltdown’, Moving Into a New Space of Existence”