‘They want to reduce the population, because they say we are many; that seven and a half billion people on earth are many, that the earth cannot sustain them, and that we have to eliminate about 5 or 6 billion, so that, of course, only they remain.’ 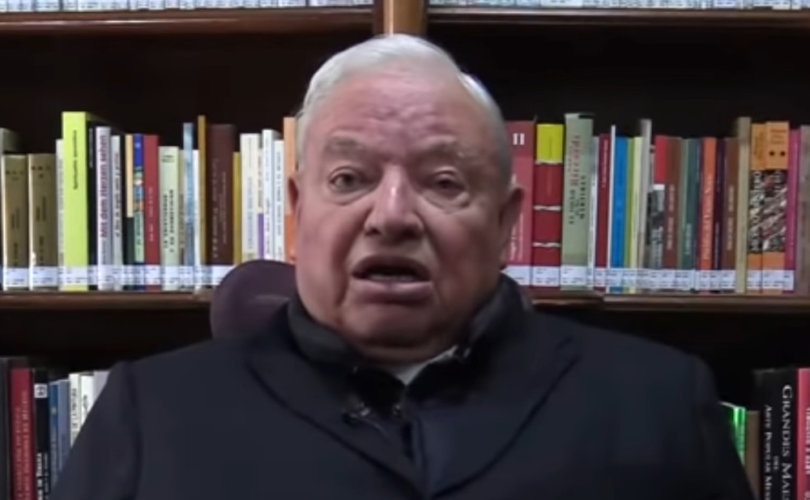 GUADALAJARA, Mexico, January 19, 2021 (LifeSiteNews) — Cardinal Juan Sandoval Iñiguez, former Archbishop of Guadalajara, Mexico, posted aa video on January 12 accusing supporters of the New World Order of promoting their cause by implementing the restrictions and measures through which they are weakening nations and economies amid the coronavirus crisis.

He also accused them of “intending” to put a “chip” in the COVID-19 vaccines that would be the “mark of the beast” of the Apocalypse without which it would be impossible to “buy or sell.”

Shortly after the video was posted on cardinal Sandoval’s Facebook page, it was censored by the social media giant, which added a “false information” flag and the words: “This publication repeats information about COVID-19, which independent fact checkers indicated is false.” According to some sources the video could not be accessed but at the time of writing this story, viewers can choose to ignore the message and go ahead to watch the video.

There is no trace in the Mexican online media of any kind of support for Cardinal Sandoval, 87, on the part of the Archdiocese of Guadalajara, and reports that his video was posted to the website of its weekly, Semanario arquidiocesano, have not been verified as the site only displays the current issue of the magazine.

In his message, Sandoval directly accused Bill Gates and others of having the means and the will to spread other viruses, such as smallpox, in order to eradicate up to five or six billion people and to implement a new world religion that would idolize “mother earth.”

His message is one of hope, however: Sandoval insisted that if the “globocrats” succeed, it will only be “temporarily,” quoting God’s promise that “the gates of hell shall not prevail” and that He will be with us “all days, even unto the consummation of the world.” As a native of the country where Our Lady of Guadalupe appeared “at the dawn” of its evangelization, he also invoked the Blessed Virgin who tells us we have “nothing to fear.” The “definitive triumph” belongs to “Our Lord Jesus,” recalled the cardinal. — Article continues below Petition — PETITION: Shut down big government NOT small business 22551 have signed the petition.Let’s get to 25000! Add your signature:   Show Petition Text Keep me updated via email on this petition and related issues.

Here below is the complete translation from the Spanish of the cardinal’s video message, as transcribed by LifeSite. (Click here for the original Spanish.)

The plot of a New Order

Dear friends, this is going to last. This pandemic is not going to be over in a month or two: it will be all year, maybe another three, four, five or six years … whatever these gentlemen want. It is going to last. It’s a tough, difficult situation that has never been witnessed in the history of mankind.

And this is being threatened by a certain Bill Gates, who is already very familiar to all of you, because he is a prophet and he predicts the future; and just as he predicted this coronavirus pandemic, he has also already said that an attack of smallpox may come, a disease that we thought had been overcome, suppressed.

But it turns out — “coincidentally,” “normally” — it turns out that in a laboratory in Atlanta, of which Bill Gates is a benefactor and a sponsor, they have a strain of smallpox. So let’s be prepared for that new pandemic, that new threat as well.

The question is, what do these gentlemen intend? They are people very high up in power, in finance, they are very high up and very hidden, although now we know the names of several of them: What do they intend with this?

They have created this virus and now it is attacking many more nations on earth. What do they want? They want a world government; they want to reach a New Order that has been proclaimed for some years now. The New Order, that is, a single world government, where there is only one government, of course; one army, one currency, one economy and also one religion, which will certainly not be the Christian religion: they will be fighting it. It will be the religion of the earth, of mother earth, the religion of man, of humanity, of universal brotherhood.

And what are these pandemics for? They weaken nations: they weaken them and impoverish them. They put them much more in debt, and thus the economy is undermined. They weaken and do away with education, with closed schools, distance education, very long vacation periods.

They hinder religious practice, as they did during the whole year that has just come to an end; they close the temples, they reduce the number of people. They prevent meetings, etc., etc.

But above all they are causing fear, a terrible fear in the population: a fear that is harmful, because this fear makes people sick. Doctors know it, and they should say it: fear inhibits the defenses, it annuls, so to say, the immune system of the organism. We must not live in fear

They want to reduce the population, because they say we are many; that seven and a half billion people on earth are many, that the earth cannot sustain them, and that we have to eliminate about 5 or 6 billion, so that, of course, only they remain.

For example, the struggle in the United States at this time is not between Biden and Trump, they are but two human persons who are passing by; they come and go. The struggle at this moment is between those who want the world order, that is, the globocrats, and the nationalists who want the independence of that great nation that is the United States, and it would do much good if it remained independent in order to influence other nations, so that they may also be independent.

It can be that temporarily they succeed in implementing this New Order. And I also say this because in divine revelation, Old and New Testament, there are mysterious words that are beginning to be fulfilled now. Mysterious words; for instance: “Go, my people, go to your private room, shut yourselves in. Hide yourselves a little while.” It is in Isaiah 26:20.

The chip that they intend to put in the vaccine to keep you under control is the mark of the beast, according to Revelation 13: “No man might buy or sell, but he that hath the character the beast in their right hand, or on their forehead,” in other words, be kept paralyzed.

Our Lord Jesus Christ spoke of a great tribulation, of a difficult time in which in some way He will come, and He asks: when the Son of Man comes, will He find faith on earth? Will there still be faith on earth? That is, it is as if He speaks of a great defection in regard to faith in Christ.

So there are mysterious words in the Holy Scriptures. The whole apocalyptic literature is full of these mysterious things, which one does not take seriously or understand until they pass, or are coming to pass like now.

If this whole global plot of the supporters of the New Order is anti-Christian, do you think it will triumph? No, it is not going to triumph; the one who is going to triumph is Christ our Lord, who also is with us, and who left us saying: “And behold I am with you all days, even to the consummation of the world.”

This is the Lord; He realizes what is happening: He looks down from heaven and laughs at men’s plans. He can thwart them with one breath, He can very easily thwart them and change things in another way.

Dear brothers, dear brothers, they are keeping us locked up, frightened, paralyzed, the more easily to govern us and make the whole earth a huge flock, where but a few shepherds from very high places, very hidden, very safe, are dictating to us what we have to do and how we have to live. But much higher than they, much more powerful than they, is Our Lord Jesus Christ, immortal King of the ages, who carries power and kingship on his shoulders; King of kings, Lord of lords.

May the Blessed Virgin protect us, especially the Virgin of Guadalupe who made a commitment to us when she came at the dawn of evangelization:

“You have nothing to fear, am I not here, I who am your mother? Are you not in my bosom?”

Therefore, let us have confidence, those of us who believe, and let us live with God, and without fear of men And may almighty God, the Father, the Son, and the Holy Spirit, bless you. Amen