But once this last pool of wealth–America’s middle class– has been siphoned dry, then who’s left to stripmine and exploit?

Neoliberalism loves markets, because markets enable the wealthy to own everything that produces income and capital gains.Neoliberalism–the superficially attractive notion that opening local markets to global capital generates prosperity for all involved–is all fun and games when it’s stripmining some distant developing-world nation, but since opportunities have dried up globally, the stripmining machine has come home to America and its target is America’s middle class.

I have long called this the Neocolonial-Financialization Model: in essence, Neoliberalism is a new, improved version of the old Colonial Model, in which the capital-rich colonial power grabs the political and economic reins via force or subterfuge and proceeds to strip the colonized nation of its wealth and resources and exploits its labor force to manufacture cheap goods for home markets.

In Neocolonialism, the forces of financialization (debt and leverage controlled by central banks and banking cartels) are used to indenture the local populace to the financial center: the peripheral “colonials” borrow money to buy the finished goods sold by the “core” corporations, doubly enriching the center with 1) interest and the transactional “skim” of financializing assets such as real estate, and 2) the profits made selling goods to the debtors.

Essential to the appeal of this colonialist model is the broad-based access to credit: everyone and her sister can suddenly afford to speculate in housing, stocks, commodities, etc., and ride this speculative bubble to a lifestyle that was once the exclusive preserve of the upper class.

Credit-poor colonials are suddenly offered generous credit at modest interest rates. It is an offer that’s too good to refuse and the resultant explosion of private credit feeds what appears to be a virtuous cycle of rampant consumption and rapidly rising assets such as equities, land and housing.

But all bubbles pop, and once the asset bubble pops, the credit bubble pops, and all the illusory wealth vanishes, leaving only the debt and the crushing monthly payments. Welcome to the Neocolonial-Financialization Model, neofeudal debt-serfs and tax donkeys!

Having run out of opportunities globally, America’s Financial Elite has come home to stripmine the last available pool of wealth: America’s middle class. You may have been wondering why America’s global corporations have been spending trillions of dollars buying back their own shares.

The answer is two-fold: 1) this reduction in the float (number of shares available for trading) boosts share prices, enriching insiders and super-wealthy owners, and 2) because these global giants can’t find any low-risk, high-return opportunities globally to invest in.

The key to stripmining the middle class is simple: once a market has been de-regulated and opened to global capital, the decisive factor becomes the cost of borrowing money, as those with the lowest borrowing costs can outbid everyone else for income producing assets.

Consider a bidding war for a single family home. Nine of the bidders can borrow money (a home mortgage) at around 4% interest, and one can borrow at 1%. This advantage in the cost of capital enables this party to outbid the other bidders because the cost of an additional $50,000 is trivial at 1%.

The bidder with 1% capital also has lower carrying costs, which means they will reap higher profits from rent than the bidders who must pay higher rates of interest.

This is how the Neocolonial-Financialization Model sluices income-producing assets into the hands of the Financial Elite, who have unlimited credit with central banks. The key to the entire Neocolonial-Financialization Model is the central bank, which gives unlimited nearly free money to banks, financiers and corporations, which then lend out this Federal Reserve-supplied nearly free money to debt-serfs at much higher rates of interest.

This is how financiers can buy 20% of all U.S. single family homes in huge gulps, funded by Federal Reserve-supplied nearly free money. This is how the once-middle class ends up “owning” a rapidly depreciating $55,000 truck (via a monstrous loan to a Fed-funded bank or corporation) while the financiers and top tier end up owning virtually all the nation’s income-producing assets.

Monopoly Versus Democracy: How to End a Gilded Age (Foreign Affairs)
“Ten percent of Americans now control 97 percent of all capital income in the country. Nearly half of the new income generated since the global financial crisis of 2008 has gone to the wealthiest one percent of U.S. citizens. The richest three Americans collectively have more wealth than the poorest 160 million Americans.”

Europe’s Financial Elite led the way, loosing the the Neocolonial-Financialization Model on Greece and other European Union peripheral nations. In essence, the “core” nations of the E.U. colonized the “peripheral” nations via the financializing euro, which enabled a massive expansion of debt and consumption in the periphery. The banks and exporters of the “core” countries exacted enormous profits from this expansion of debt and consumption.

This is the perfection of Neofeudalism. The peripheral nations of the E.U. are effectively neocolonial debtors of the Core countries’ banks, and the taxpayers of the Core nations are now feudal serfs whose labor is devoted to making good on any bank loans to the periphery that go bad.

In America, the middle class has been stripped of income-producing assets and saddled with the tax burdens shirked by the billionaires, financiers and global corporations. Having already stripped and exploited America’s working class, now an asset-less class of precariats, America’s Financial Elite are busy mopping up the last of the middle class’s assets.

But once this last pool of wealth–America’s middle class– has been siphoned dry, then who’s left to stripmine and exploit? The Federal Reserve has no answer, and neither does anyone else. So here’s the answer too frightful to say out loud: just like rats dumped in a sealed 55-gallon drum, America’s Financial Elite will have only itself to feed on from now on.

The E.U., Neofeudalism and the Neocolonial-Financialization Model (May 24, 2012) 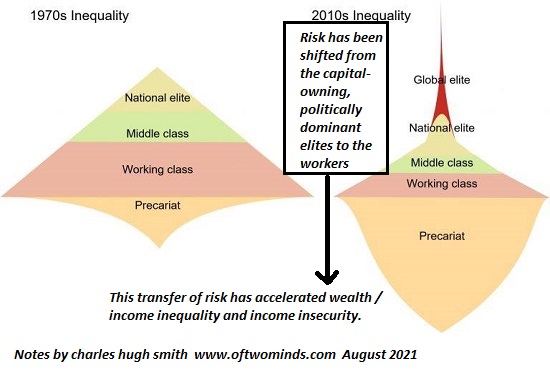 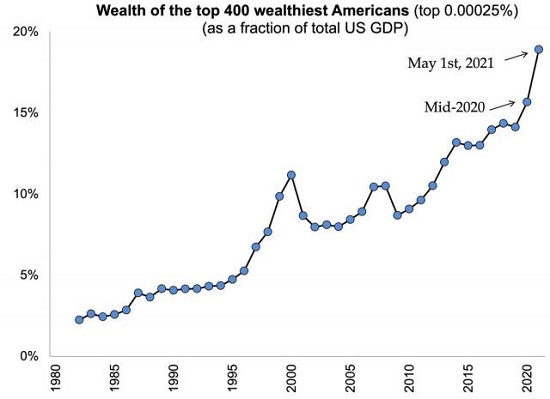