Biden, commander of the “true believers”

As the United States moves resolutely towards civil war, President Joe Biden is relying on left-wing believers of different faiths. He sees Donald Trump’s voters as people who have been abused in their faith and whom he must bring back to the true path. By manipulating religions, the Democratic Party is dividing the country, not between different faiths, but between ways of thinking about faith. President Biden’s ambition is to unite all his fellow citizens under his own magisterium in order to continue along the path laid out by Barack Obama. In fact, far from appeasing, he is unwillingly radicalizing the political debate. 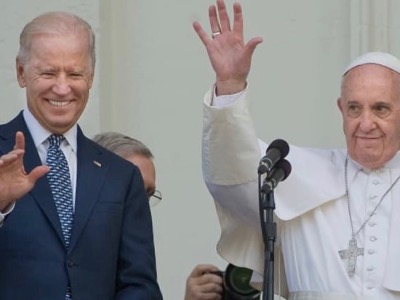 Just after the disputed election of the US President, Joe Biden called Pope Francis to receive his blessing. He then presented himself as the “President-elect” without waiting for the meeting of the Electoral College appointed by the Governors.

I have previously presented the supporters of woke culture in the US as “Godless Puritans”. This is a shortcut to point out that many of them do not believe in God. I would like to correct this picture by dealing here with the imprint of believers within the American left. This is a subject that is very little discussed in the USA [1] and totally ignored in Europe, where the US overlord always erases the outrageous aspects of religions.

First of all, it is necessary to set the context:

The United States would have been founded by a Puritan sect, the Pilgrim Fathers, who came in the 17th century on board the Mayflower. They left England, crossed the Atlantic, found an almost empty continent where they brought their demand for purity and built a “City on the Hill” that illuminated the world. In fact today, the United States is the champion of religious freedom in the world, but not of freedom of conscience: the testimony of a renegade against his former church or sect is not admissible in a court of law.

During the Cold War, President Eisenhower positioned the United States as the champion of Faith in the face of the Soviets’ “Godless Communism” [2]. He distributed “Christian” propaganda to all his soldiers and set up an ecumenical prayer group in the Pentagon, now known as “The Family” [3]. He spread it throughout the Western world. All the presidents of the Chiefs of Staff Committee have belonged and still belong to it, as well as many foreign heads of state or government.

Finally, since the dissolution of the Soviet Union, Americans have been detaching themselves from their Churches, and 17% of them claim to be agnostic, and sometimes even atheist. As for the number of believers who do not claim to be affiliated to a particular church, it is constantly increasing. Political discourse is no longer directed only at believers of all Christian denominations, or even at believers of all religions, but also at non-believers.

This development was first expressed at the Democratic Party Convention in 2012. While many workshops were organised by religious groups, the texts presented and adopted no longer mentioned God. Not because the party no longer had an overwhelming majority of believers, but because they wanted to continue to speak to everyone and the US people had changed.

In the 2004 presidential election, the Democratic candidate, John Kerry, is a Catholic who had hesitated to become a priest. He believes he can count on the electorate of his religious community, but is unable to do so. Left-wing Catholics are not yet organised. His speech on abortion shocked the future Cardinal Burke, who asked the Episcopal Conference to refuse him the Eucharist. Finally, Pope Benedict XVI would evoke, after his defeat at the hands of George W. Bush, his de facto excommunication.

In 2008, the election of Democrat Barack Obama, which was presented as a victory for black organisations, was in reality an even greater victory for left-wing, predominantly white Christians. His chief of staff, John Podesta, being a Catholic activist, had gathered all the chapels of left-wing Christians, Protestant and Catholic, to support his accession to the White House.

Similarly, the passage of the law on the obligation for workers to take out health insurance with a private company is above all a victory of left-wing Christians against those on the right. The former intended to follow the precepts of their religion, while the latter wanted to save their values. Note that Jesus the Nazarene always refused to position himself on these grounds, but taught by his example. Note also that Barack Obama’s legislative choice was not political. He never cared about what his fellow citizens wanted.

Barack Obama has a great religious culture, not only Christian but also Muslim. Not much is known about his faith, but he has always appeared to be very respectful of all forms of religion. This has long allowed him to appear wise and to unite believers from all walks of life behind his name.

He reformed the White House Office for Faith-based Initiatives created by his predecessor. He made sure that federal subsidies would not be used for any particular faith. He placed the young Joshua DuBois there to coordinate the left-wing believers and added a council composed of their leading figures:

Reverend Traci Blackmon, who was committed to health care for all;

Reverend Jim Wallis, editor of Sojourners magazine and spiritual advisor to the President;

best-selling author Rachel Held Evans, author of A Year of Biblical Femininity: How a liberated woman found herself sitting on her roof, covering her head and calling her husband master;

Harry Knox, leader of the Human Rights Campaign’s Religion and Faith Program and then director of the Religious Coalition for Reproductive Choice, leader of gay rights and the fight for abortion rights;

Rami Nashashibi, Director of the Inner-City Muslim Action Network. He campaigned to distinguish Muslims from terrorists after the 9/11 attacks.

All of these personalities actively participated last year in the debates on the statues to be toppled or in the Black Lives Matter demonstrations.

During her presidential campaign Hillary Clinton spoke as little as possible about her personal faith. She spoke a lot to believers, especially evangelicals. With a discourse on the precepts of Christianity which would impose to confess the original sin of slavery and to receive all migrants, she did not succeed in convincing them. It was only after her electoral defeat that she announced that she was thinking of becoming a Methodist pastor.

On the contrary, her rival, Donald Trump, who does not seem to have any religious preoccupation, managed to rally to him the majority of right-wing Christians and particularly white Evangelicals. He presented himself to them not as a believer, but as a “guy who was going to get the job done” and save the values that left-wing Christians were neglecting. Right-wing Christians appreciated his sincerity and saw him as a miscreant sent by God to save America.

During Obama’s term, American left-wing believers felt – rightly or wrongly – that Pope Francis was speaking to them in particular. Indeed, they interpreted his first apostolic letter, Evangelii gaudium (2013), which invites the faithful to evangelise the world, as a justification for their political commitment, since it deals with “the preferential option for the poor”. However, contrary to what left-wing believers in the United States think, the Catholic Church has never taught to prefer some men to others. Especially left-wing believers have received the encyclical Laudato si’ (2015), devoted to environmental issues, as a support for their environmental activism. On the whole, all confessions combined, they now consider Pope Francis as the most legitimate religious leader.

Joe Biden is the second President of the United States to be Catholic after John Kennedy. But while Kennedy had to prove that he was independent and would not accept an injunction from a foreign pope, Biden tried by all means to be worshipped by a pope adulated by his constituents. During his election campaign, he aired an advertising clip in which he explains what he owes to his faith. When he lost his wife and daughter in an accident, and then one of his sons to cancer, it allowed him to overcome his grief and keep hope.

At the beginning of this article, I mentioned the Pentagon prayer group. Since its creation by General Eisenhower, it has organized a prayer lunch with the current President of the United States every year at the beginning of February. Everyone was waiting for President Biden’s speech. It lasted 4 minutes by video conference. The speaker condemned “political extremism” (an allusion to his predecessor) and celebrated fraternity among “Americans”.

For the new president, the Americans are “good”, as he proclaimed at the inauguration ceremony. The Democratic Party seeks Social Justice in the tradition of the “Social Gospel” of the 1920s. All Americans should have spontaneously followed him. Unfortunately, right-wing believers were blinded by Donald Trump; a man without religion. They voted for this billionaire without realizing that they were betraying their faith. That is why it is his duty to open their eyes and make them happy in spite of themselves.

President Biden has never tried to understand why right-wing believers voted for Trump. He has always considered this fact to be an intellectual anomaly. So today he is trying to equate the group QAnon with a delusional sect that imagines Satan everywhere in Washington. In each of his statements, he tries to present the Trump presidency as a mistake, a sinister parenthesis with no future.

For left-wing believers, the only thing that matters are the decisions taken since 20 January in favour of immigrants, women, sexual minorities, and against the violation of the sacred spaces of Indian minorities.

We are witnessing a vast misunderstanding. Left-wing believers think that they should impose their political beliefs in the name of God, while the Democratic Party thinks that it should not think politically, but seduce its voters. The separation of church and state still exists institutionally, but not in daily practice. The problem has shifted: it is no longer between religions, but between different conceptions of Faith.

Saint Bernard, who preached the Second Crusade, recognised that “Hell is paved with good intentions”. This is exactly what is happening here: left-wing believers are behaving like fanatics. They talk about national unity, but have launched a witch hunt, compared to which McCarthy’s witch hunt was no big deal. They dismissed hundreds of advisers in the Pentagon; they have tried to remove an elected representative from the House of Representatives because she questions the official version of the 9/11 attacks; or they want to arrest all the members of the QAnon movement. They don’t pacify the United States after the capture of the Capitol, but push it into civil war.

[1] American Prophets: The Religious Roots of Progressive Politics and the Ongoing Fight for the Soul of the Country, Jack Jenkins, HaperOne (2020.

[3] The Family: the secret fundamentalism at the heart of American Power, Jeff Sharlet, HarperCollins (2008).