The problem is no longer who was legitimately elected President of the United States, but how long can the civil war be postponed? Far from being a fight between a narcissistic TV presenter and a senile old man, the country is being torn apart over a fundamental cultural issue that has been smouldering since its inception.VOLTAIRE NETWORK | PARIS (FRANCE) | 15 DECEMBER 2020عربيDEUTSCHΕΛΛΗΝΙΚΆESPAÑOLFRANÇAISITALIANONEDERLANDSPORTUGUÊSРУССКИЙ 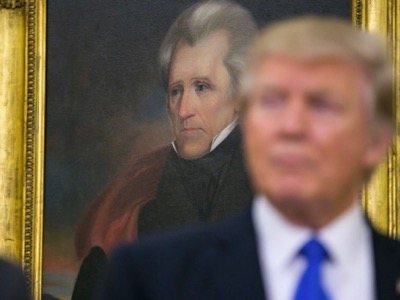 President Donald Trump placed a portrait of his predecessor, Andrew Jackson, in his White House office.

Here we are: the disaster that has been predictable for the past 30 years is looming. The United States is heading inexorably toward secession and civil war.

Since the demise of the USSR, the “American Empire” no longer had an existential enemy and therefore no reason to exist. The attempt by George H. Bush (the father) and Bill Clinton to give the country a new life with the globalization of trade has destroyed the middle classes in the USA and in almost all of the West. The attempt of George W. Bush (son) and Barack Obama to organize the world around a new form of capitalism – financial this time – has been bogged down in the sands of Syria.

It is too late to turn the tide. Donald Trump’s attempt to abandon the American Empire and refocus the country’s efforts on its domestic prosperity has been sabotaged by the elites acquired to the puritanical ideology of the “Pilgrim Fathers”. As a result, the moment so feared by Richard Nixon and his election adviser Kevin Philipps has arrived: the United States is on the brink of secession and civil war.

What I am writing is not a fantasy, but the analysis of many observers in the United States and around the world. For example, the Wisconsin Supreme Court has just declared Donald Trump’s election fraud appeal inadmissible, not on legal grounds, but because “it would open Pandora’s box.

In fact, contrary to the misrepresentation of events that dominates the international press, either the outgoing president’s appeals are judged in law and he is obviously right, or they are judged in politics and proving him right will provoke civil war. But the conflict is already too far advanced. Judging him politically in defiance of the law will also provoke civil war.

We must stop interpreting the presidential election as a rivalry between Democrats and Republicans, whereas Donald Trump has never claimed to be a member of the Republican Party, which he stormed during his 2016 campaign. He is not an enlightened man, but a successor to President Andrew Jackson (1829-37). Yes, ideologically, the latter prefigured the “Southerners,” the “Confederates.

Just because Andrew Jackson is ignored in Europe does not mean that he is a marginal figure in American history. His portrait appears on the $20 bill, which he vetoed at the Federal Reserve.

We must stop pretending that Donald Trump does not represent the majority of his fellow citizens when he was first elected president in 2016, when he has just helped thousands of candidates win local elections in his name, and when he has just won millions more votes than in 2016.

No one in Europe seems to dare to see what is happening in front of us, because everyone clings to the idea of a United States that is a paragon of democracy. Please read the US Constitution, it will only take you a few minutes. It recognizes the sovereignty of the Federated States, not of the People. Its main designer, Alexander Hamilton, said it and wrote in the Federalist Papers: its purpose is to establish a regime comparable to the British monarchy without aristocracy, certainly not a democracy.

This constitution lasted two centuries only because of the compromise of the First Ten Amendments (Bill of Rights). But in this age of globalization of information, everyone can see that the dice are loaded. This system is certainly tolerant, but oligarchic. In the United States, almost all laws are drafted by organized pressure groups, regardless of who is elected to Congress and the White House. The political staff is just a smokescreen that hides the real Power. Every decision of every politician is noted by these groups and directories compiling their docility are published every year.

The Europeans, who want to represent the United States as a democratic nation, keep claiming that the presidential election is a matter for the electorate. This is absolutely false. The constitution does not provide for the election of the federal president in the second degree by the people, but by an electoral college appointed by the governors. Over time, governors have ended up holding elections in their states before choosing the members of the Electoral College. Some have agreed to include it in their local constitutions, but not all. In the end, the federal Supreme Court doesn’t care, as it did when George W. Bush v. Al Gore was appointed 20 years ago. It explicitly stated that the potential election rigging that had taken place in Florida was not within its jurisdiction.

In that context, Donald Trump would probably have won the 2020 election if the United States were a democracy, but he lost because it’s an oligarchy and the politicians don’t want him.

The Jacksonians, supporters of democracy, have no choice but to take up arms to make their cause triumph, as the Second Amendment to their Constitution explicitly provides. In the original sense of the Second Amendment, the right of Americans to acquire and bear all manner of weapons of war is intended to enable them to rebel against a tyrannical government, as they did against the British monarchy. This is the meaning of the compromise of 1789, which the majority of them considered to have been broken.

General Michael Flynn, the short-lived National Security Advisor, has just called for the suspension of the constitution and the introduction of martial law to prevent civil war. The Pentagon, whose head was replaced a month ago by the outgoing president in favour of friends of the general, is standing by.

Donald Trump, meanwhile, announced that he will appear before the Texas court that will rule on local election fraud. Texas is one of two states that formed an independent republic before joining the United States. But when it joined, it retained a right to opt out. In 2009, then Governor Rick Perry threatened to secede. This idea is still going strong. Today, the local Congress is expected to decide on Representative Kyle Biedermann’s proposal for an independence referendum.

The process of dissolution of the United States could be faster than that of the USSR. It was studied at the time in Moscow by Professor Igor Panarin. Demographics have changed since then and have been analyzed by Colin Woodard. The country would then be split into 11 separate states on a cultural basis. The 11 rival cultural communities that share the United States today.

To these problems are added the complaints against the legislatures of some 20 states that passed laws during the Covid-19 outbreak governing elections in a manner contrary to their own constitutions. If these appeals, which are legally founded, are successful, they will have to annul not only the presidential election, but all local elections (parliamentary, sheriffs, prosecutors, etc.). It will not be possible to verify the alleged facts in Texas and elsewhere until the Federal Electoral Council meeting. Texas and other states with similar appeals, as well as those that will have to annul the election, will therefore not be able to participate in the nomination of the next President of the United States. In such a case, the only substitution procedure that applies is for the new Congress, in which the Puritans are in the minority and the Jacksonians are in the majority.

2 thoughts on “AMERIKA: Civil War Becomes Inevitable in the USA – By Thierry Meyssan”