Nagorno-Karabakh: victory of London and Ankara, defeat of Soros and the Armenians

The Pentagon, which had planned the war in Nagorno-Karabakh, was overtaken by its British allies. But none of the great powers worried about the deaths it would cause. Moreover, while London and Ankara renewed their historic alliance, Washington and Moscow gained nothing, while George Soros and the Armenians lost much.VOLTAIRE NETWORK | PARIS (FRANCE) | 24 NOVEMBER 2020عربيDEUTSCHΕΛΛΗΝΙΚΆESPAÑOLفارسىFRANÇAISITALIANONEDERLANDSNORSKPORTUGUÊSРУССКИЙTÜRKÇE 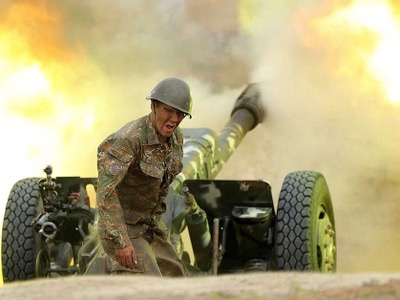 After 44 days of war, Armenia was forced to sign a ceasefire with Azerbaijan, acknowledging the loss of part of its territories. However, as we reported in the form of an interrogation, the initial plan of the United States was to blame Turkey, let it massacre part of the Armenian population, then intervene, overthrow President Erdoğan and restore peace [1].

However, this plan did not work. It masked a British ploy. Underhandedly, London took advantage of the confusion of the US presidential election to double-cross Washington. It used the situation to try to deprive Russia of the map of Nagorno-Karabakh and resume the “Great Game” of the nineteenth century. [2] At the time, London was the ally of the Ottoman Empire against the Tsarist Empire. When Moscow realized this, it imposed a cease-fire to stop the massacre.

Throughout the 19th century, the British and Russian empires engaged in a fierce rivalry to control the Caucasus and all of Central Asia. This episode is known in England as the “Great Game” and in Russia as the “Tournament of Shadows”.

Russia began to win the game when it seized Nagorno-Karabakh. By a domino effect, it then extended its domination over the Caucasus.

In view of this historical precedent, London now believes that recovering Nagorno-Karabakh could allow it to undermine Moscow’s influence in the Caucasus and then throughout Central Asia.

The current British Prime Minister, Boris Johnson, claims to be the continuator of the imperial policy of Winston Churchill, of whom he is a biographer. He has just made public a costly plan to modernize his armies [3].

To relaunch the “Great Game”, on July 29, 2020, he appointed Richard Moore, director general of the Foreign Office, as director of MI6 (foreign secret services). He had previously served as His Majesty’s ambassador to Ankara, speaks Turkish fluently, and has made friends with President Recep Tayyip Erdoğan. He did not take up his new post until October 1, four days after the Azeri attack on Nagorno-Karabakh.

2- The pivotal role of Richard Moore

Richard Moore is a personal friend of Prince Charles, himself patron of the Oxford Centre for Islamic Studies, where the intellectuals of the Muslim Brotherhood have been trained for twenty-five years. The former Turkish president, Abdullah Gül, is also administrator of this center.

As ambassador to Ankara (2014-17), Richard Moore accompanied President Erdoğan to become the patron of the Brotherhood.

He also played a role in the British withdrawal from the war against Syria in 2014. London did not intend to pursue a conflict in which it had engaged for colonial purposes, but which turned into a US imperial operation (Rumsfeld/Cebrowski strategy).

Richard Moore has just undertaken a tour of Egypt and Turkey. He was in Cairo on November 9th (the day of the Russian imposition of a cease-fire in Karabagh) to meet President al-Sissi and in Ankara on November 11th. Officially, he would not have had an audience with his old friend, President Erdoğan, but only met his spokesman at the White Palace.

3- Facing the States, Soros does not count

In the Azeri-Turkish war in Nagorno-Karabakh, Washington believed it could count on President Armen Sarkissian and the Armenian Prime Minister, Nikol Pashinyan, one of George Soros’ men, [4] as bait.

George Soros is an American speculator who pursues his own political agenda, but works in concert with the CIA [5]. Unfortunately, the British do not have the same relationship with Soros: he owes his fortune to a vast operation against the pound sterling (on Black Wednesday, September 16, 1992), hence his nickname “the man who broke the Bank of England”.

4- The double game of “Perfidious Albion”

London let Washington do it first. The Americans encouraged the “Two-State Nation” (Turkey and Azerbaijan) to forcibly end the Artsakh Republic.

MI6 helped its Turkish partner to transfer jihadists to Azerbaijan [6], not to kill Armenians, but Russians. But there are were Russians in Karabagh yet.

Soros reacted by sending Kurdish mercenaries to support the Armenian side [7].

Pretending to play the US game, London supported Baku and Ankara. During the first days, the three powers of the Minsk Group (in charge of the Nagorno-Karabakh conflict since the dissolution of the USSR) – i.e. the United States, France and Russia – all three tried to obtain a halt to the fighting and a resumption of negotiations [8]. When they each successively noted Azeri bad faith, they presented a proposal for a resolution to the Security Council. For Washington, it was a question of operating in a coordinated manner a reversal, from neutrality to the condemnation of the “two-state nation”.

In the first days, the Armenians defended themselves as best they could. However, the head of state, Armen Sarkissian, modified the plans of the military staff and brought up inexperienced volunteers to the front. [9] Sarkissian has dual Armenian-British nationality. The result was a massacre among the Armenian army.

Suddenly, the United Kingdom announced that it would use its veto if the text was put to a vote. The United States, taken aback, publicly accused Azerbaijan of bad faith on 25 October.

But it would take another two weeks for Russia to understand that Washington, entangled in its presidential election campaign, was no longer handling the issue.

It is only around October 6 that Russia became certain of the existence of an English trap in the American trap. It quickly concluded that London had relaunched the “Great Game” and was preparing to steal its influence in Nagorno-Karabakh.

Russian President Vladimir Putin called his Turkish counterpart on October 7th. He negotiated with him a cease-fire very unfavorable to the Armenians. Erdoğan, who has understood that he will not be able to resist a stabilization of the political situation in the United States, agrees to gain only territory and renounces the relaunch of the Armenian genocide. President Putin then summoned his Azerbaijani counterpart, Ilham Aliyev, and the Armenian Prime Minister, Nikol Pachinian, to the Kremlin. He saved what could still be saved by forcing his interlocutors to sign a ceasefire on October 10tj under the terms negotiated by Erdoğan [10]. His priorities were to draw up the Russian military presence via a peace force and then to stop the bloodbath. He then addressed the Russian people to announce that he had saved the interests of his country by saving Armenia from an even more terrible defeat.

The Armenians realized, far too late, that by taking them away from Russia for the USA, Nikol Pachinian had bet on the wrong horse. They understand in retrospect that however corrupt the former team that led them was, it was patriotic, while Soros’ men are opposed to the very concept of nationhood, and therefore to the independence of their country.

Demonstrations and resignations followed one another: the Chief of Staff, the Minister of Foreign Affairs, the Minister of Defence, but not the Prime Minister. For his part, the Azerbaijani President, Ilham Aliyev, is jubilant. He mocks copiously the Council of Europe and the Parliament of the European Union, proclaims his victory and announces the reconstruction of the conquered territories [11]. The British will have new privileges for British Petroleum and apply to exploit the Azeri gold mines.

[3] “Boris Johnson Statement to the House on the Integrated Review”, by Boris Johnson, Voltaire Network, 19 November 2020.

[4] “Larisa Minasyan: OSF-Armenia has supported and supports the velvet revolution in the country”, Arm Info, March 5 2019.

Nagorno-Karabakh: victory of London and Ankara, defeat of Soros and the Armenians, by Thierry Meyssan (voltairenet.org)