– “…The basic principles of spirituality are at the core of every religion and often referred to as the “Golden Rule.” It has been taught for millennia and is most well known in the phrase “Do unto others as you would have them undo to you.” Nothing has changed from this Golden Rule other than the verbiage”

The 10 Spiritual Realms According To An Ancient Japanese Buddhist Priest

One night in the early days of my six-month tenure managing a holistic healing retreat center in Puerto Escondido, Oaxaca, Mexico, our community gathered as we always do for the evening activity. This evening’s activity focused on a discussion of the ten spiritual realms. The person sharing his knowledge on the subject was a short Italian traveller and devout Buddhist named Lorenzo.

His claim to fame at the retreat center was being voted most likely to be found chanting the mantra “Namu Myōhō Renge Kyō,” which means “Devotion to the Mystic Law of the Lotus Sutra” or “Glory to the Sutra of the Lotus of the Supreme Law.” In his words: “Namu Myōhō Renge Kyō is a vow, an expression of determination, to embrace and manifest our Buddha nature. It is a pledge to oneself to never yield to difficulties and to win over one’s suffering. At the same time, it is a vow to help others reveal this law in their own lives and achieve happiness.”

This is the central mantra chanted within all forms of Nichiren Buddhism and Tendai Buddhism. The practice of prolonged chanting is referred to as shōdai, while the purpose of chanting daimoku is to reduce sufferings by eradicating negative karma along with reducing karmic punishments both from previous and present lifetimes, with the goal to attain perfect and complete awakening. Sometimes he would be found chanting this mantra for hours at a time. This was his “thing” and we loved him for it!

In the very beginning of his talk he looked at each of us wide-eyed and asked the group: “Has anyone here ever been in hell?” I looked around the room and after a few seconds of waiting, slowly raised my hand. Without hesitation, he looked me directly in the eyes and said “Good! Now you can help others get out.” There are few things that people have said to me throughout my life that I know will stay with me forever; this was one of them. So began our intro to the ten spiritual realms.

The 10 Spiritual Realms as described by Nichiren Daishonin are listed below. Broken into two parts, the first six (Hell, Hunger, Animality, Anger, Humanity, and Heaven) are derived from the Indian concept of the six realms of rebirth. Above these lie the four holy states (Learning, Realization, Bodhisattva, and Buddhahood).

1. Hell or Jigokudō: A state of suffering and despair in which we perceive we have no freedom of action. It is characterized by the impulse to destroy ourselves and everything around us. It is also commonly referred to being in a state of mind completely absent of hope and being unable to construct our future in our minds.
2. Hunger, Hungry Ghosts, or Pretas: The state of being controlled by insatiable desire for money, power, status etc. While desires are inherent in any of the Ten Worlds, in this state we are at the mercy of our cravings and cannot control them.
3. Animality, Beasts, or Chikushōdō: In this state, we are ruled by instinct with neither reason nor moral sense nor the ability to make long-range judgments. We operate by the law of the jungle and will not hesitate to take advantage of those weaker than ourselves and fawn on those who are stronger.
4. Anger, Titans, Asuras, or Shuradō: Here, awareness of ego emerges, but it is a selfish, greedy, distorted ego, determined to best others at all costs and seeing everything as a potential threat to itself. In this state we value only ourselves and tend to hold others in contempt.
5. Humanity or Jindō (also known as Tranquility): This is a flat, passive state of life, from which we can easily shift into the lower four worlds. While we may generally behave in a humane fashion in this state, we are highly vulnerable to strong external influences.
6. Heaven: This is a state of intense joy stemming, for example, from the fulfillment of some desire, a sense of physical well being, or inner contentment. Though intense, the joy experienced in this state is short-lived and also vulnerable to external influences.
7. Learning, Śrāvaka, or Shōmon: In this state, we seek the truth through studying the teachings or experience of others.
8. Realization, Pratyekabuddha, or Engaku: In this state we seek the truth not through others’ teachings, but through our own direct perception of the world.
9. Bodhisattva or Bosatsu: Those who aspire to achieve enlightenment and at the same time are equally determined to enable all other beings to do the same. Conscious of the bonds that link us to all others, in this state we realize that any happiness we alone enjoy is incomplete, and we devote ourselves to alleviating others’ suffering. Those in this state find their greatest satisfaction in altruistic behaviour.
10. Buddhahood: A dynamic state that is difficult to describe. We can partially describe it as a state of perfect freedom, in which we are enlightened to the ultimate truth of life. It is characterized by infinite compassion and boundless wisdom. In this state, we can resolve harmoniously what appear from the standpoint of the nine worlds to be insoluble contradictions.
A Buddhist sutra describes the attributes of the Buddha’s life as a true self, perfect freedom from karmic bonds throughout eternity, a life purified of illusion, and absolute happiness. 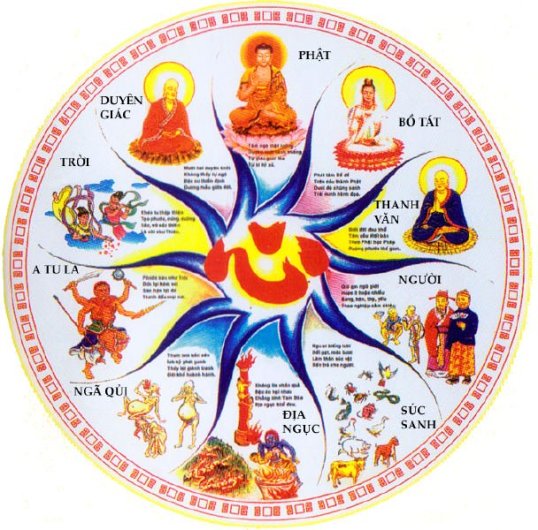 Be Your Own Guru

Personally, I feel that understanding the difference between each of these realms and integrating the lessons learned by visiting them all can inspire rapid personal growth. As someone who has set out on a seemingly unending quest for personal and spiritual development years ago, I have learned quite a few things in my travels. One of the greatest lessons was how to truly listen to others, but ensure that their thoughts don’t become my own unless they align with my personal truth.

In my experience, individuals who lack control over their own emotions and actions tend to feel the need to push their own ideas, agendas, and influences onto others. When it comes to giving advice, I appreciate Tony Robbins’ approach on this subject. As he would say, “I am not your guru,” but if talking with me can help you realize what steps you need to take in order to better your own life without harming others, then great! I’m not you. I have no idea what you’re going through, but if I can assist in removing mental blockages to get you to where you need to become your own guru, then that’s a beautiful thing.

It is essential to take some time and look at the positive aspect of suffering. The creative forces inside each and every one of us seem to be activated when we are experiencing difficult times. Have you ever wondered why you prefer the earlier work of your favourite musicians? Did you ever think maybe it has to do with the fact that they were “hungry artists,” channeling their own pain and utilizing it as a source of creativity while desperately trying to make their mark on the music scene? Once I realized this a while back, I always make sure to look for the lesson to learn and wonder how I can use that seemingly negative energy to create something beautiful in times of despair.

We will constantly revisit these realms, sometimes many of them throughout the course of a single day or even only a few hours. Just because we’ve previously attained the higher spiritual worlds doesn’t mean we won’t revisit the other lower ones later on in life. By developing a deeper understanding of these states of mind, we are better equipped to conquer them.

What Makes Someone “Spiritual”? 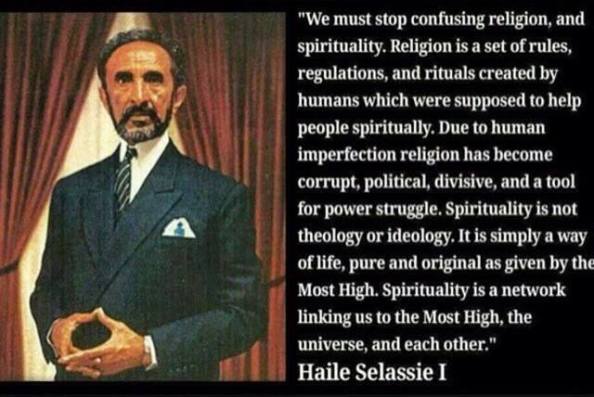 So let’s say that you meditate and do yoga daily, you pray for the wellbeing of others, you don’t eat meat, you go to farmers markets, buy locally sourced produce, wear conscious-made sustainable clothing, have a vast collection of Lumerian Quartz Crystals for your shrine, have full moon ceremonies with your soul tribe, and attend Burning Man every year. Does that make you spiritual? Not exactly, at least not in my opinion. These are, however, things that many people do as part of their spiritual path. However, for me, spirituality is defined simply as being someone whose highest priority is to love themself and others. That’s it. If you do all the aforementioned things, but you’re still an asshole to other people, sorry, but you’re doing it wrong.

The basic principles of spirituality are at the core of every religion and often referred to as the “Golden Rule.” It has been taught for millennia and is most well known in the phrase “Do unto others as you would have them undo to you.” Nothing has changed from this Golden Rule other than the verbiage, as you can see in the diagram below.

At the end of the day, I view truly spiritual people as those who have been through hell themselves and want nothing more than to help others get out because they know what it’s like. These are beings that help others with humility and don’t allow a self-serving ego to subsist within their being. Killing the ego is not a phrase I like to use. The ego is part of our personality and who we are as human beings; however, we must keep it in check to ensure that it exists to serve us so that we may serve others. Now that’s being spiritual as fuck!

One thought on “DIVINE PRESENCE: The 10 Spiritual Realms According To An Ancient Japanese Buddhist Priest (Archive)”