– “…Terence McKenna – a renowned mystic and psychonaut – broke the traditional mold when he presented his theory of how humans advanced so quickly in such a short space of time. The theory, which is known as the ‘stoned ape’ theory looks at the question from outside the box. But is it really as ridiculous as some people believe, or is it possible McKenna was on to something?”

SM:…Stoned Apes?, I’d comment on this if I wasn’t so stoned…& stuffed from eating all those banana’s…

Psychedelic Mushrooms and the Evolution to Homo sapiens

In the video below, renowned mycologist Paul Stamets explains the “stoned ape hypothesis” to Joe Rogan. The hypothesis was developed by Terence McKenna and documented in his 1993 book Food of the Gods. McKenna’s “Stoned Ape Hypothesis” offers one explanation for how humans doubled their brain capacity and became Homo sapiens over the short evolutionary time of about 200,000 years. The Stoned Ape Hypothesis centers around the mushroom Psilocybe cubensis.

Scientists have developed other explanations for our leap in cranial capacity over that time period including climate change, social competition, and the demands of ecological systems. McKenna’s theory has received less attention over the years and has been criticized for lack of evidence. However, it should be noted there is scant, if any, evidence to support the other theories.

Dung Paves the Way for Advancement

McKenna explains that as Africa began to undergo desertification, our human ancestors were forced out of the forests and onto the savannas to find food. These groups would follow footprints and dung on the ground to find animals to hunt and eat. It just so happens the hallucinogenic mushroom Psilocybe cubensis is a dung-lover, often found growing in the manure of animals that live on the savanna.

According to the stoned ape hypothesis, human ancestors ate these mushrooms and experienced their extraordinary hallucinogenic effects. The effects are often described as “mind-opening,” feeling empathy and increased courage, and seeing fractal patterns even with the eyes closed. After consuming the mushrooms, leaders emerged within groups as those who were brave and kind to others. These leaders became trusted as looking out for the best interests of the group.

McKenna’s theory goes on to propose that “magic mushrooms,” containing psilocybin derivatives improved visual acuity, making individuals better hunters. More food meant a higher rate of reproductive success. Although there is no scientific proof, McKenna also thought higher doses of psilocybin would increase sexual arousal, resulting in more mating attempts. He also proposed that higher doses would increase activity in the language-forming regions of the brain, causing visions and music. Further, McKenna said the strange effects of psilocybin dissolved the ego and contributed to the development of religion. Therefore, the theory argues access to hallucinogenic mushrooms was an evolutionary advantage for humans. McKenna called it the ‘evolutionary catalyst.’

Cultural evolution led early humans to domesticate cattle, causing them to live even more in the presence of manure, and therefore, more P. cubensis. From the times of our earliest human ancestors, eating P. cubensis wasn’t just happening here and there, but millions of times over millions of years causing what Stamets calls ‘epigenetic neurogenesis.’

Check out the video below and feel free to post your thoughts in the comments section.

Paul Stamets is a mycologist, author and advocate of bioremediation and medicinal fungi. In this animation he describes the incredible properties of fungi as well as an overview of how mushrooms could have played a massive role in the evolution of human consciousness.

(Paul did want to issue one correction: Folks, On this broadcast, I made a misstatement. Although the divergence of basidiomycota is estimated to be as far back at 1.2 billion years ago, the fossil, Gondwanagaricities magnificus is estimated to be more than 100 million years old. “Molecular clock estimates suggest the divergence of the Basidiomycota around 500 Ma to 1.2 billion years [26] and G. magnificus establishes the earliest calibration point so far for the Agaricales, with a new minimum age of 113–120 Ma.” Source: http://journals.plos.org/plosone/arti…)

The Stoned Ape Theory and the Dawn of Human Consciousness: Did Our Prehistoric Ancestors Evolve by Getting High?

The origins of behavioral modernity and what exactly makes us human are topics which have fascinated people for hundreds of years. There is a plethora of theories as to which archaic human ancestor first displayed traits that set them aside from other apes, and the reasons that this behavior may have evolved.

One question that people have tried to find an explanation for is how humans evolved from our Homo erectus forebears, doubling our brain size within a span of about 200,000 years – which in evolutionary terms is the blink of an eye.

Terence McKenna – a renowned mystic and psychonaut – broke the traditional mold when he presented his theory of how humans advanced so quickly in such a short space of time. The theory, which is known as the ‘stoned ape’ theory looks at the question from outside the box. But is it really as ridiculous as some people believe, or is it possible McKenna was on to something?

Terence McKenna during a panel discussion at the 1999 AllChemical Arts Conference, held at Kona, Hawaii. (Jon Hanna/ CC BY SA 3.0 )

What is the Stoned Ape Theory?

The Stoned Ape Theory presented by McKenna proposes that the evolutionary leap between Homo erectus and Homo sapiens was a result of a surprising addition to the human diet Psilocybe cubensis (magic mushrooms).

It sounds outlandish at first – how could eating mushrooms possibly make such a huge difference that Homo erectus doubled its brain size? McKenna based the theory on research conducted in the 1960s by Roland Fischer, a scientist who conducted a lot of research on the effects of psychedelic drugs .

He believed that Homo erectus were forced to turn to new food sources, including magic mushrooms, as the climate in Africa changed. The effects of the mushrooms meant that the thought processes of Homo erectus rapidly reorganized.

The Stoned Ape theory argues that the effects of magic mushrooms played a pivotal role in the evolution of the species. Increased clarity of vision would make hunting easier. Increased sexual desire would mean they were more prolific.

McKenna also notes the effects of magic mushrooms on modern humans – stimulating the language portion of the brain and inducing religious experiences would have opened the path towards behavioral modernity and if Homo erectus had similar experiences he calls them an “evolutionary catalyst”. 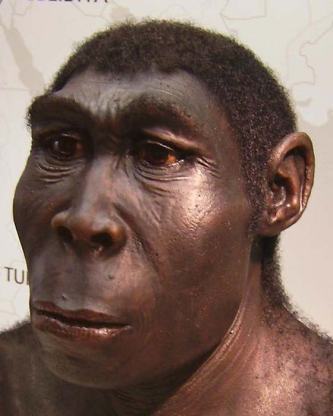 A reconstruction of a Homo erectus, exhibit at the Westfälisches Landesmuseum, Herne, Germany. ( CC BY SA 2.5 )
Sceptics of the Stoned Ape Theory