– “…In 1988, the authorities of Nagorno-Karabakh, which remained predominantly Armenian in ethnic makeup, despite Azerbaijani administration, petitioned Moscow to have their land transferred to Armenia. After this was rejected, tensions mounted, escalating into a full-fledged war in 1991…it lasted until May 1994 and claimed an estimated 15,000 to 25,000 lives on both sides”

Azerbaijan & Armenia at war: What you need to know about bloody conflict over long-disputed region of Nagorno-Karabakh

Tempers are boiling over in Armenia and Azerbaijan amid clashes in Nagorno-Karabakh © Photolure via Reuters / Melik Baghdasaryan; AFP / Tofik Babayev

The bloody flareup between Azerbaijan and Armenia over a territorial dispute risks escalating into a major regional war. Here is how the two former Soviet republics got locked into a conflict rooted in feuds as old as the hills.

The ongoing hostilities started on September 27, becoming one of the most serious in a series of border clashes that have been occurring in the region on a fairly regular basis. The parties are fighting over Nagorno-Karabakh, a mountainous region located inside Azerbaijan, as recognised internationally, and some surrounding territories.

Baku claims sovereignty over these, based on borders set during the Soviet era, and asserts that they have been occupied by Armenia. Yerevan supports the predominantly-Armenian population of Nagorno-Karabakh in their bid for independence, for which they fought a bloody war against Azerbaijan in the 1990s.

Nagorno-Karabakh is among those places in the world where there is no historically correct evidence on whose claim is stronger. It was always too distant and difficult to control for any particular power to become dominant in ethnicity or religion. Armenians and Azeris have been living there in a patchwork of settlements, with old grudges held across generations.

The Russian Empire absorbed the region in the early 19th century after a war with Iran, but its goals were limited to preventing growing Armenian and Azeri nationalism from boiling over. After the Bolshevik revolution in the beginning of the 20th century, a full-fledged war started. The Soviets got involved with their own agenda to retake control of the region, and supported the territorial claim of the Azeris. The reason was largely down to the Bolshevik’s desire for Turkey to eventually embrace communism. The Turks and Armenians were sworn enemies and Joseph Stalin feared upsetting Constantinople, the then capital, by giving Yerevan land desired by Baku. Thus, Nagorno-Karabakh ended up as an autonomous region of Soviet Azerbaijan.

The disintegration of the USSR then led to a repetition of the same scenario. In 1988, the authorities of Nagorno-Karabakh, which remained predominantly Armenian in ethnic makeup, despite Azerbaijani administration, petitioned Moscow to have their land transferred to Armenia.

After this was rejected, tensions mounted, escalating into a full-fledged war in 1991. Fought between independent Azerbaijan and the self-proclaimed Nagorno-Karabakh Republic, backed by Armenia, it lasted until May 1994 and claimed an estimated 15,000 to 25,000 lives on both sides, also forcing hundreds of thousands to flee.

The truce signed then – with Russia’s mediation – left Nagorno-Karabakh in control of most of the territory it held as a part of Azerbaijan, plus large swathes of land connecting it to Armenia and Iran, and a small portion on the Azeri side. 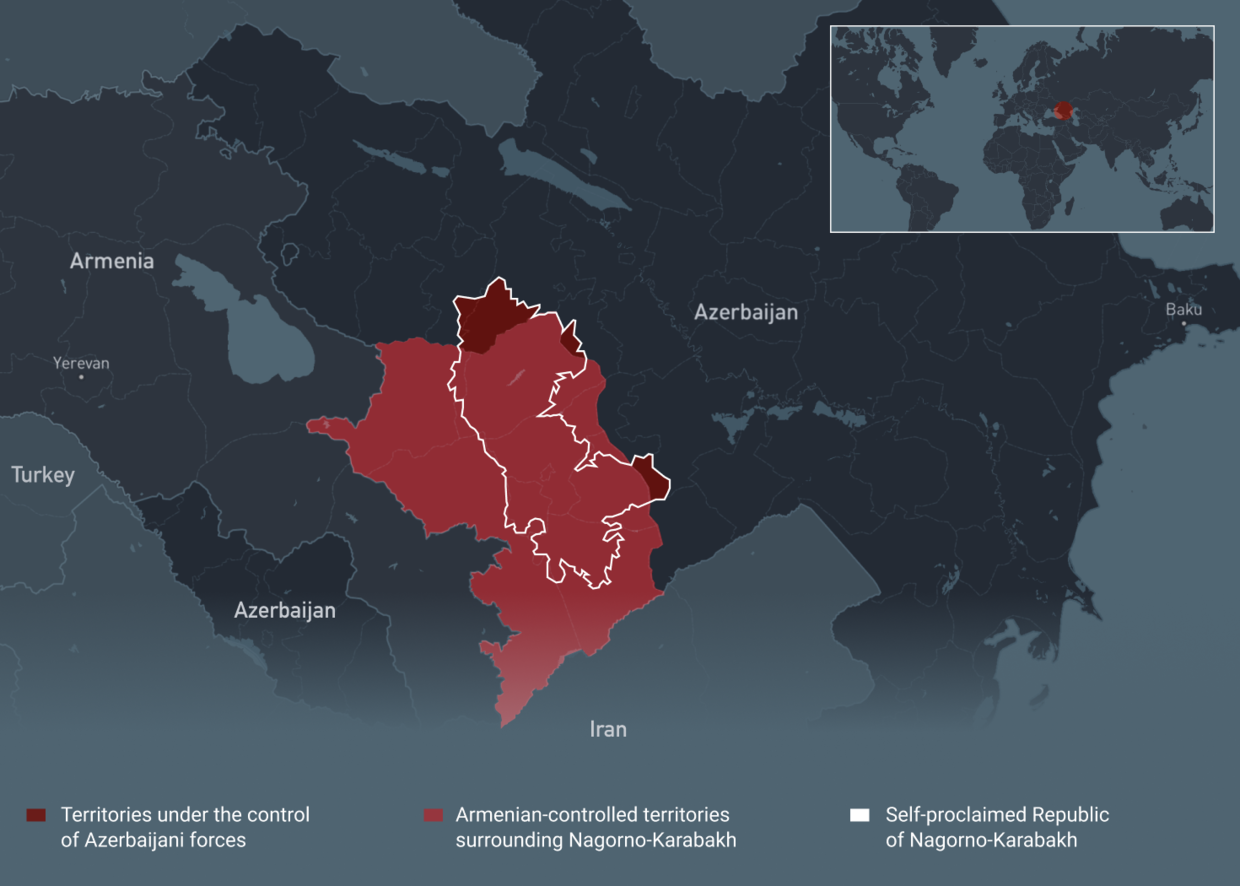 The conflict was never resolved, only frozen, so the resumption of hostilities in Nagorno-Karabakh last week didn’t come out of the blue. Major flareups, not unlike the current one, occurred in 2014, 2016 and in July of this year.

What is different this time is the stance taken by Turkey, a long-time backer of Azerbaijan, and Armenia’s historical nemesis. Unlike many international players calling on the sides to stop hostilities, Ankara has been openly goading Baku into seizing the disputed lands by military force.

The situation puts Russia in a rather precarious situation as Moscow is a long-time ally of Armenia and has a military base there. At the same time, Russia has been closely working with Turkey on a number of international issues, such as bringing peace in Syria.

For the past few days, the Kremlin and the Russian Foreign Ministry have been calling on all parties to the Nagorno-Karabakh conflict to step back from violence and return to negotiations.