– “…Real reports also show Mohammed Atta, the former Egyptian security officer, then with Saudi intelligence, to have been an operational planner operating from his rented apartment in Fort Lee…This team, originally headed by FBI special agent John O’Neill and later by FBI special agent Mike Dick, which was to include nuclear weapons specialist Jeff Smith, was centered in Fort Lee, New Jersey, not just to watch Atta but to watch Atta and his accomplices, which included Israeli teams who used a safehouse only blocks away”

Editor’s note: This is a reprint from 2016 of a recap of an investigation done between May 5, 2014, and June 2015 by select members of a combined team including but not limited to:

Sorry if I am not adequately inclusive.  Gordon Duff 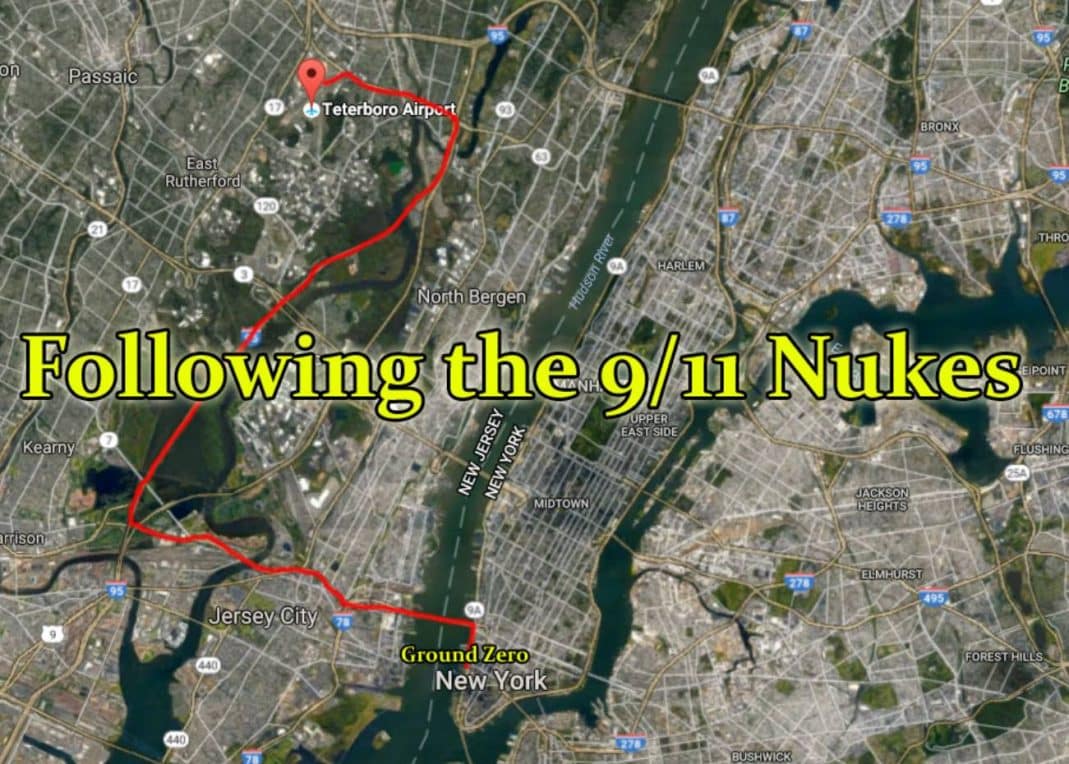 …. by Gordon Duff with Jeff Smith and Ian Greenhalgh

[Editor’s Note: We have another update from VT’s 9-11 A-team on the ongoing tragedy of 9-11, the reprehensible failure of our governmental, security, legal and press organizations to not be savaging the 9-11 commission fairy tale.

The real perpetrators are still out walking around, knowing they have a tried-and-true successful template in their pocket to redeploy at a time of their choosing in an updated fashion. The anomalies of 9-11 just scream out at you, yet our entire security structure seems to have been struck dumb by a secret space weapon.

Not one official with any standing at all has challenged VT’s 9-11 reporting. That includes mass media, which, to date, has not put in one call “to learn more”, and perhaps revisit their own coverage, or should I say coverup.

But they are not all to blame, as America’s institutions have stood down on 9-11 en masse, which gives the public some cover, because they would tend to think that if the commission report really were a fraud, surely some important groups would be screaming about it.

But Gordon has the perfect answer to that. It’s one of his favorite lines, “Welcome to how the world really works.” We know VT readers care, so we will hang with you to the end on this, our end or theirs… Jim W. Dean ] 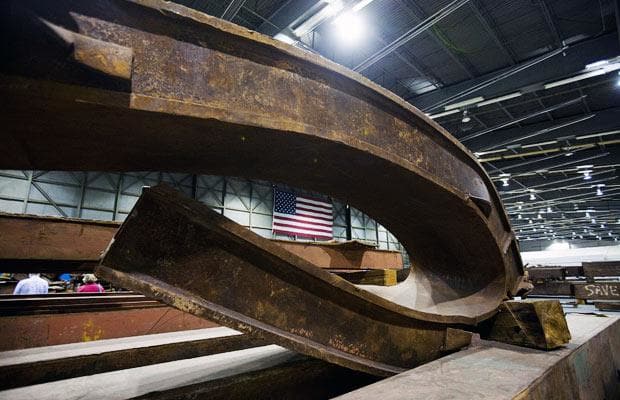 For the first time in nearly a year, a 9/11 investigator has revealed highly classified information on the real events of 9/11, not a terror attack, but rather a nuclear attack on the United States, not a surprise at all, but one the US had expected, one predicted by a former American president and one purposefully ignored by President Clinton and quite probably facilitated by George W. Bush, who certainly empowered the cover-up.

As early as 1996, insiders including former President George H.W. Bush, knew America was susceptible to nuclear terrorism. This was “The Sum of All Fears” just as depicted in the film, stolen nukes, planted beneath an iconic target, but those involved were certainly not terrorists.

Let’s be perfectly clear, were one to watch today’s news and not suspect that the US created and has run al Qaeda since the onset, one might be operating with something less than a full deck of cards.

What changes things now is that, with the override of Obama’s veto by congress last week, Saudi Arabia can be sued for complicity in 9/11. There is and has been evidence of Saudi Arabian involvement, even in the limited false narrative published in the 2005 9/11 report or the supposed missing “28 pages.”

Real reports also show Mohammed Atta, the former Egyptian security officer, then with Saudi intelligence, to have been an operational planner operating from his rented apartment in Fort Lee. Where the cover-up hits home is that Atta was under surveillance by a team tasked with investigating nuclear terrorism against the US.

This is the subject of the real investigation and the records of this, seized by the Department of Homeland Security, and held for release after 50 years, tell a wider story, one that involves Israel deeply at every turn, along with traitors in the Pentagon.

What we can do now is open doors for legal counsel going after Saudi Arabia. Without what is here, no counsel will be able to even be denied documents outlining witnesses and evidence that, according to the popular fictional narrative, do not exist.

If you want to cash in as the only reason to go to court, by all means, sue Saudi Arabia. But if justice is desired, go after Israel and go after its friends. We have all their names and everything required to show their complicity. 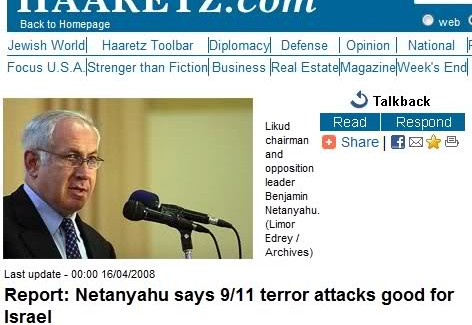 Here is what is now added to the narrative, not the official narrative, but the one based on the 2003 investigation. The following information is from the US Department of Energy Preliminary Report on the Events of September 11, 2001:

This is the new information of use only to those who know the truth behind 9/11.

Back in May 2014, VT received files from the real 9/11 investigation by the US Department of Energy. For those who are unaware, the DOE manufactures nuclear weapons under the innocent guise of a public utility sounding name.

Working with them, beginning on 9/12, was the International Atomic Energy Agency, part of the UN, whose investigators were in New York at the United Nations that fateful day. They picked up their Geiger counters, donned their yellow hard hats and their “Con Ed” (the power company for the City of New York) ID badges and yellow vests and began tracking the ionizing radiation signatures and taking soil samples.

The Florida connection is the Jeb Bush connection

The story began as one of nuclear proliferation, allegedly by Israel, ignored by the Clinton administration. You see, during the warming of relationships between the US and Russia, START (Strategic Arms Limitations Treaties) agreements forced the US to dismantle thousands of nuclear warheads.

The ones that came apart first were those that were oldest with plutonium cores that had converted to dangerous levels of PU240. These weapons were taken out of stockpiles, based on the date of manufacture of the cores. There were multiple reasons for this:

You see, these lists, which cores matched which, fell into the hands of an American ally, Israel. Then the cores began to disappear from the Pantex disassembly and storage facility in Amarillo, TX, not randomly, but in matched pairs, confirmation that these secret lists had been compromised, or had been asserted by our source, that Tom Countryman, who had access to the lists, had turned them over to Israel.

Former US President, George Herbert Walker Bush, from his offices on Memorial Drive in Houston TX, hired a team of investigators to look into what William Jefferson Clinton would not, perhaps because of his compromised position vis-a-vis Monica Lewinsky or some other shortcoming.

Carnaby is dead, shot by police during a Houston traffic stop. Smith, with VT today, is under gag order by the secret Houston 9/11 grand jury, that sits on so much evidence, created by Michael Chertoff and John Ashcroft, tasked by Bush (43) with ending any potentially fruitful 9/11 inquiry.

John Wheeler was found in a Delaware trash dump and John O’Neill died on 9/11. 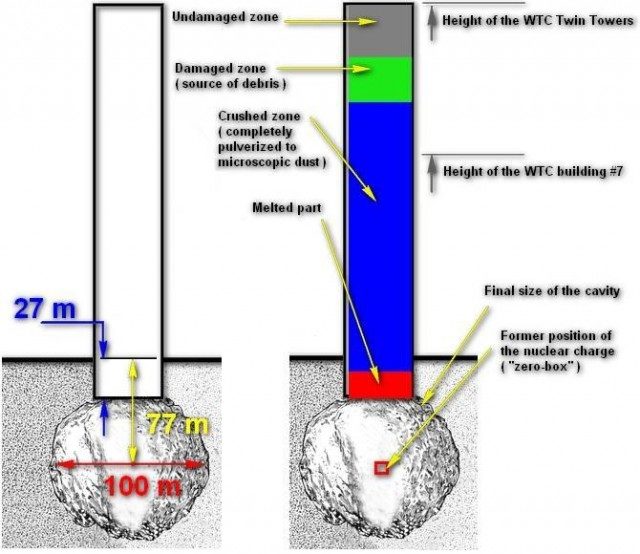 “Add to all these signs, the molten metal in the footprints of WTC 1, 2, and 7 that for three months could not be extinguished by water or daily soil changes as it consumed concrete, steel, glass, office combustibles. The increasing incidence of radiation-only cancers from residents is another tell-tale sign of a nuclear “event.” There were also aerial photographs of steam “upwellings” that were pouring out of street gratings two and three blocks south of the WTC, or Ground Zero. 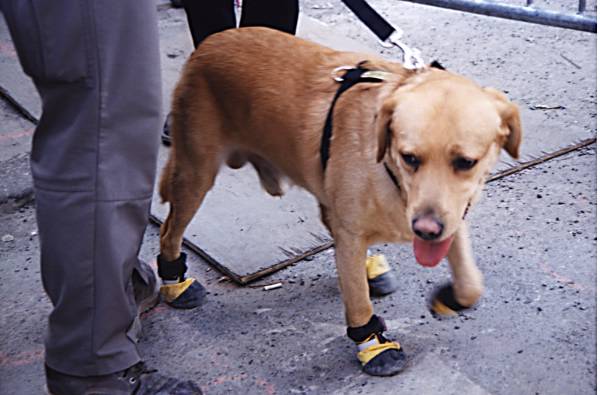 “Steel toes would often heat up and become intolerable. This heat was also a concern for the search-and-rescue dogs used at the site. Many were not outfitted with protective booties. More than one suffered serious injuries and at least three died while working at Ground Zero.” 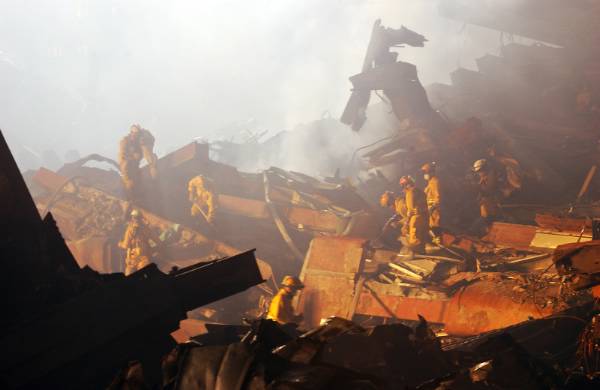 “Instead of heat subsiding within a week, as is generally the case for major fires, the astronomically elevated heat levels remained for three months.

”Cleanup vendor Bechtel Corporation—with 40 employees at the Pile—issued this comment about working conditions:

The surface was so hot that standing too long in one spot softened (and even melted) the soles of our safety shoes.” 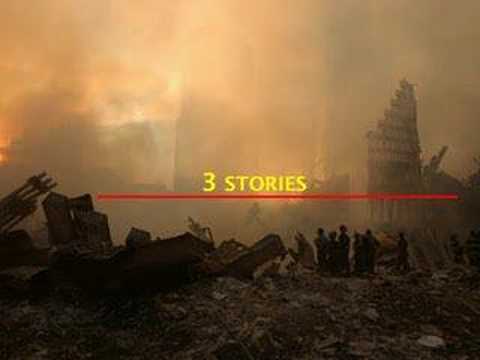 More than a thousand pits may have disappeared, but 350 is the confirmed number reported to former President GHW Bush by his investigators in 1998. They were traced as having left the Pantex facility in refrigeration trucks, where they were transferred to a fertilizer plant in West, TX. 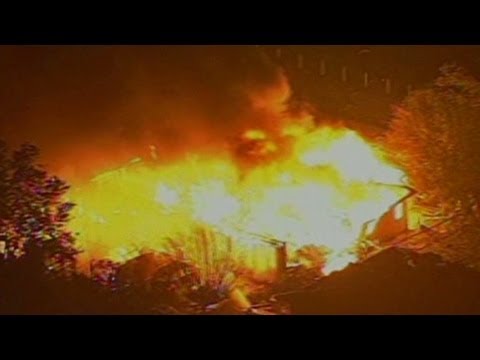 In 2013, this facility suffered a catastrophic accident. 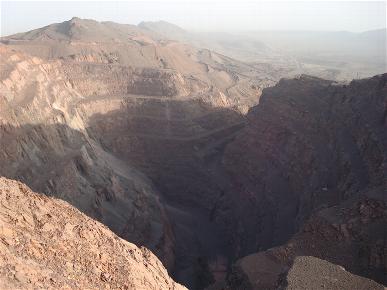 During the investigation of the missing pits, Jeff Smith traced them through the Port of Houston to the Canary Islands and to the African nation of Mauritania, where they were stored in an iron mine controlled by South African extremists working closely with Israel.

These same South Africans, in 1975, signed a treaty with Israel to develop weapons. On September 22, 1979, they exploded their first nuclear weapon off St. Edwards Island south of Capetown. They also developed extensive biological and chemical warfare weapons under the guidance of Dr. Woulter Basson, a cardiologist, who developed some of the most dangerous biological weapons known to man.

This “ratline” is one long used by “Lord of War” Victor Bout, photographed below with VT columnist Dmitri Khalezov (former Russian nuclear investigator) in the background.

This is how nuclear arsenals in a half dozen or more non-nuclear states like Saudi Arabia, Taiwan, and South Korea came into being.

One of the investigators had been in New York for some time. He was living in Fort Lee, New Jersey.

The original team had been headed by John O’Neill, who had been tasked with hunting down Osama bin Laden but, in doing so, had stumbled on something very different going on, something he learned while working in Yemen. We believe he learned that bin Laden had been traveling in and out of the US, something we have confirmed, and that up to 9/11, bin Laden was actively employed by the CIA.

There are no active records of O’Neill working with Able Danger in Fort Lee, other than our direct contact with his coworkers on that assignment who claims he was forced out, publicly accused of misplacing classified information, later recovered.

Questions survive, such as why was there no attempt to deal with the nuclear threat? There had been a story passed around during the late 1990s that Israel had been storing nuclear material, perhaps even weapons, at its consulate in New York. In 2007/8 this story began moving around the internet but never in relation to 9/11.

This we do know….Continued in Part 2