– “…In brief, here is how I believe this latest round of audaciously escalating fraud will play out. Given that “too big to fail, too big to jail” is now established worldwide policy, the logical next move for the billionaire class will be buy up everything of hard value with unlimited free unbacked money and massive debt”

Editor’s note: This is a guest post by my friend and colleague Zeus Yiamouyiannis, Ph.D., who has contributed essays to Of Two Minds since 2009.

I wrote this predictive observation in the January 28, 2011 Of Two Minds post entitled, Abused Fundamentals and Fake Markets: How They Play Out (later published and updated in 2013 in my book: Transforming Economy: From Corrupted Capitalism to Connected Communities):o we have a lawless system. What does this mean for citizens and investors? In the near term it means that the fundamentals will not apply. Anything that maintains or augments elite wealth and increases elite options will be supported, and anything that consumes or converts common people’s wealth and labor and restricts their choices will be pursued.

Anything that reinforces accountability, rational response, or cause and effect will be actively suppressed. Forget reversion to the mean. One only has to observe where the respective value/wealth of each party resides and where it gets channeled to know what the market will do and where policy will go. When the stock market should crash, it won’t… until some time frame far longer than even the most generous fundamentals would dictate…

Analyses that try to predict near term market moves based on Laffer curves, Elliot Waves, and historical cycles will almost definitely fail. We don’t have a ‘new era’, but we definitely have unprecedented coordinated global intervention dedicated almost solely to the fortunes of the top 1%. That is the new rule that will govern until there is a serious breakdown.

The chickens are now coming home to roost, and proving to a greater and greater degree that markets are no longer markets at all, or even casinos. They are clearinghouses for transfers of wealth from the many to the few. Period. No credible argument can be made otherwise. Therefore, we must first and foremost understand the rigged system to inform active resistance and effective alternatives. In so doing, we must also transform ignorance into awareness, obedience into civil disobedience, and fearful attachment into creative interdependence.

In brief, here is how I believe this latest round of audaciously escalating fraud will play out. Given that “too big to fail, too big to jail” is now established worldwide policy, the logical next move for the billionaire class will be buy up everything of hard value with unlimited free unbacked money and massive debt. Think private equity firms, but on a colossal scale: Extract and savage this wealth from every known stored value, and leave the mess for someone to clean up. This is a project now supported by every major central bank and it involves monopoly ownership of every avenue of value assignment and measurement by a handful of people and companies.

What proof do I have that there no longer exists a “market” at all in terms of fundamentals?

Exhibit A: Why are the dollar, stocks, gold, oil, and even Bitcoin all moving in the same direction, when, according to fundamentals, they should move in opposite directions?

Gold, and I would add the U.S. dollar, create a convenient floor at the zero to positive level, to potential black swans that might sweep the more “risky” fake markets (and cause them to fall before they are rescued again upward).

Therefore, I expect the U.S. Dollar to remain strong, gold to hold its value, as a stable foundation and exchange medium for wealth extraction. Bitcoin will also hold its value and be dominated by the big players in order to control the gateway to democratized value exchange (and they can do so by borrowing unlimited 0% interest U.S. dollars to buy up as much Bitcoin as they want).

All traditional, modern, and post-modern forms of value exchange will be dominated by the same players and manipulated to their advantage to extract and concentrate greater wealth. Manipulate the stock market, gold, oil, and Bitcoin up, get the suckers to pile on, then sell, let it crash, and buy again, an unending cycle of wealth extraction. Use government subsidies, bailouts, and tax shelters to hide and sequester wealth. Rinse and repeat.

What basic precursors do you need to stampede wealth toward the few?

First, you need unlimited cost-free money, preferably the U.S. dollar as the world’s reserve currency. This has been accomplished with zero-percent interest rates going on twelve years now (effectively negative interest rates when adjusted to inflation). Paying nothing or next to nothing for both savings and borrowing, does two things: 1) This converts trillions of dollars worth of ordinary-people value in lost savings interest to frictionless manic borrowing and gambling by the big guys. 2) This induces John and Jane Doe and their companies’ pensions to participate in and inflate a rigged stock market if they want any return at all.

Combine this zero-interest, unlimited, frictionless money with allowing unlimited stock buybacks, and the value of stocks no longer has to even be connected with earnings! Tesla’s price to earnings (PE) ratio is at the time of this writing over 1,100! PE’s of 30 or 40 used to be considered irrational exuberance. What would you call this? Is there any longer even a theoretical limit? 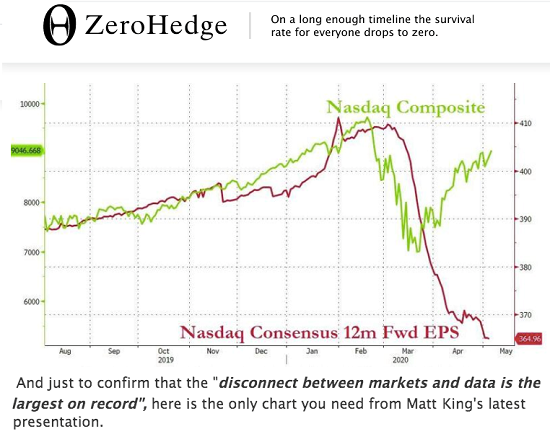 Second, you need dominant global corporatism and oligarchy in which all asset valuation, production, government regulation, and monetary policy is geared toward the maximum financial enhancement of a tiny billionaire elite. This allows a divorce between risks and consequences, where the little guy accepts all liability and the big guy gets all the profits.

How much have billionaires made since the collapse of the market in March 2020? They have made 637 billion dollars according to an August 3, 2020 Business Insider article, which also notes that this separation and concentration of wealth is only accelerated by government bailouts that go overwhelmingly (some 90%) to a wealthy hyper-minority (with tax loopholes and shelters that allow them to keep those ill-gotten gains).

Meanwhile, 30+ million ordinary people lose their jobs, and as many as half of small businesses may be closing their doors, while multi-billion dollar hedge funds are showered with “small business” cash because they have less than 50 employees. 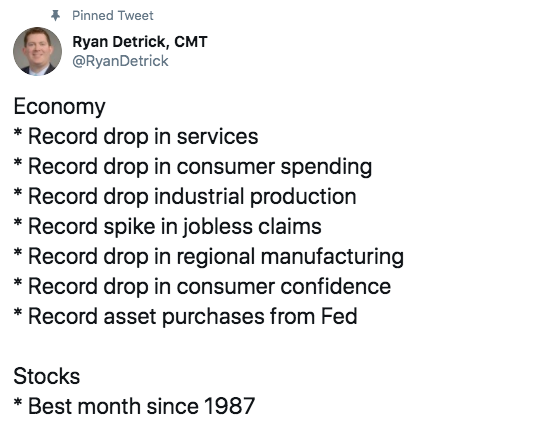 Third, you need austerity and disaster capitalism for the little guy so you can force them to sell off their assets at rock-bottom prices. You also need controlled political systems run by technocrats and bureaucrats that don’t mind exploiting and abusing the little guy as long as they get a slice of the pie to maintain their own lifestyles. And it doesn’t hurt to have bloviating nationalist dictators, and various “deep state” conspiracy theories to arouse the emotions of the public and direct these emotions to anything (anger at immigrants, and black and brown people, abortion, feminists) but not at the very entities anger should be directed toward– corrupt capitalists, lawless corporations, and predatory oligarchs. 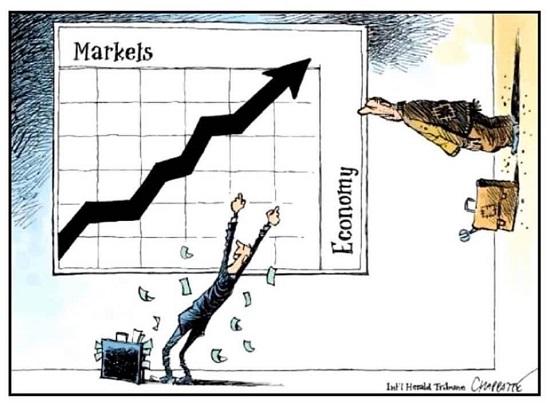 The one thing we can say right now, unless something drastically changes, is that there are no upper level champions for the ordinary citizen. Donald Trump has already proven to be an alarmingly agile lackey for the power elite, dumping trillions into their coffers, hiring them as advisors, and getting rid of any kind of financial or environmental regulation. Joe Biden’s advisors are touting “austerity” for the little guy, while promising Big Oil that they will not have their subsidies cut (despite Biden’s platform promise to cut subsidies), and promising Big Finance that they will remain unchecked.

It remains to be seen which Joe Biden will show up, the neo-liberal bootlicker or the one that follows through on this own policy platform to rein in the out-of-control abuse of the power elite. Congress is no better. Any attempts to get money directly to the ordinary public is being thwarted outright by Mitch McConnell, who simply uses legislative extortion to guarantee that the lion’s share will always go to the super-wealthy.

Not only have the billionaire class made money, they have tightened their monopolistic grip on the levers of money supply and distribution, turning a global rigged casino into a global company town. Though the supply of dollars is and will become more and more ridiculous, the demand for those dollars among the elite will become even more ridiculous.

Will we have another flash crash, and fear and want, resulting in consolidation of poverty for the many and material ownership for the few? Will people drastically downsize, suffer through austerity policies, while Big Everything (Oil, Pharma, Finance, etc.) continues to get bailed out and get multi-billion dollar subsidies even when they bring in record profits?

Will we have a massive collapse of commercial and residential real estate, because of people moving in together and millions of small businesses closing, which will allow private equity firms to sweep in and buy properties up in collusion with corrupt banks for pennies on the dollars?

The big banks don’t have to worry, because their assets will be backstopped. However, will small banks and credit unions who rely on lending be forced into bankruptcy, where they can be swallowed as well? This is where we are heading if “we the people” do not stand up to this multi-headed hydra.

This is part of series entitled When the World Market Itself Is Fake, Economic “Value” Loses Any Real Meaning.

Parts 2 and 3 of this series will explore where we are right now and what to look for in the tough times ahead.

Parts 4 and 5 will discuss healthy, pro-democratic, creative alternatives to the current rigged system.