– “…In the future, the team would like to expand the project so that robots themselves are acting out the play and no human supervision is needed. This doesn’t sound as nuts now that we know a blockbuster movie production will soon shoot the first mainstream film featuring an artificially intelligent robot as its lead actor”

Algorithmic artificial intelligence (AI) has been used for years to generate artwork – everything from stories to punk rock albums and classical music – but a new theatrical play may take the cake as for creative pursuits by machine intelligence.

A team of researchers at Charles University, Švanda Theater and the Academy of Performing Arts in Prague is merging the fields of AI and robotics with theater, using the open-source language model called GPT-2. This generative language model can process pre-existing text and then expand off it.

The researchers say their AI is writing a theatrical play that will premiere in January 2021. Rudolf Rosa, who is part of the team conducting the study underlying the project, says the subject of the play’s story is very much on the nose.

“The main idea behind our study came from Tomáš Studeník, an innovator who noticed that the 100-year anniversary of the theater play R.U.R. is approaching. This was a key moment for robotics, as the idea of a robot, including the word ‘robot’ itself, was invented by Karel Čapek and his brother Josef, who wrote this play. Tomáš thought that this should be properly celebrated and came up with the idea of turning the story around: 100 years ago, a man wrote a theater play about robots; what if today, robots wrote a theater play about men?” 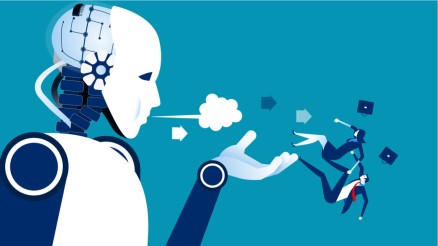 Tasking an AI with the creation of an entire play that is both coherent and consistent, not to mention entertaining, is no small feat. To accomplish this, the research team uses ‘hierarchical generation’, which involves breaking the play manuscript down into smaller sections.

“When we fed GPT-2 a scene setting and a few lines of the drama script, it generated further lines in the same style and focusing on the topic of the input script chunk,” Rosa further detailed. “This way, we did not have to train anything (yet), as we restricted the generator a bit to keep to the task and not to diverge elsewhere. We can thus make use of the great large GPT-2 model trained for a very long time on very large texts, which we could not afford ourselves to train on our hardware, as only the largest tech companies can train such models nowadays.”

The team is also using a technique known as ‘flat text generation’, whereby a deep learning machine algorithm writes lines one by one.

The scary thing is that while Rosa discusses how amazing GPT-2 is as an algorithmic text generator, this is not even the most advanced iteration out there. Recently, GPT-3 has hit the market and is blowing people away with its “jaw-dropping” ability to rapidly generate creative text, highly complex fictional scenarios and rich, detailed story worlds.

Nick Walton, the creator of the game AI Dungeon, used GPT-3 last year to upgrade his game. In its plot, the algorithm invented a mythical grimoire and is “able to seamlessly read entire sections from it. The game invents a complex magic system and underlying theory behind why it works and describes it.”

Most AI researchers believe we are entering an era where there will be fascinating collaborations between humans and AI. Rosa calls it “the human-in-the-loop concept,” but explains that they’re being transparent about the, “Basically, all computer-generated ‘art’ (if we want to call it so) is touched and retouched by humans in some way, but often this is not very transparent. In our work, we are trying to be very explicit on what the machine does and what a human does, making their cooperation an integral part of the system design, not a post-hoc fix.”

In the future, the team would like to expand the project so that robots themselves are acting out the play and no human supervision is needed. This doesn’t sound as nuts now that we know a blockbuster movie production will soon shoot the first mainstream film featuring an artificially intelligent robot as its lead actor.

The future is going to be a wild place.

5 thoughts on “BRAVE NEW WORLD: A.I. Is Writing A Play About ‘The Birth of Robotics’ And Human Writers Should Be Worried”