–  “…In simple terms, the dollar is losing value…Congress is working on another stimulus package that will mean trillions more in borrowing and spending. And the Fed will have to monetize all that debt. Jerome Powell has already committed to “do whatever we can, for as long as it takes…In other words, there is no reason to believe the monetary debasement is going to end any time soon”

Gold broke its all-time price record on Monday and held above that level throughout the day.

So, what is this telling us? 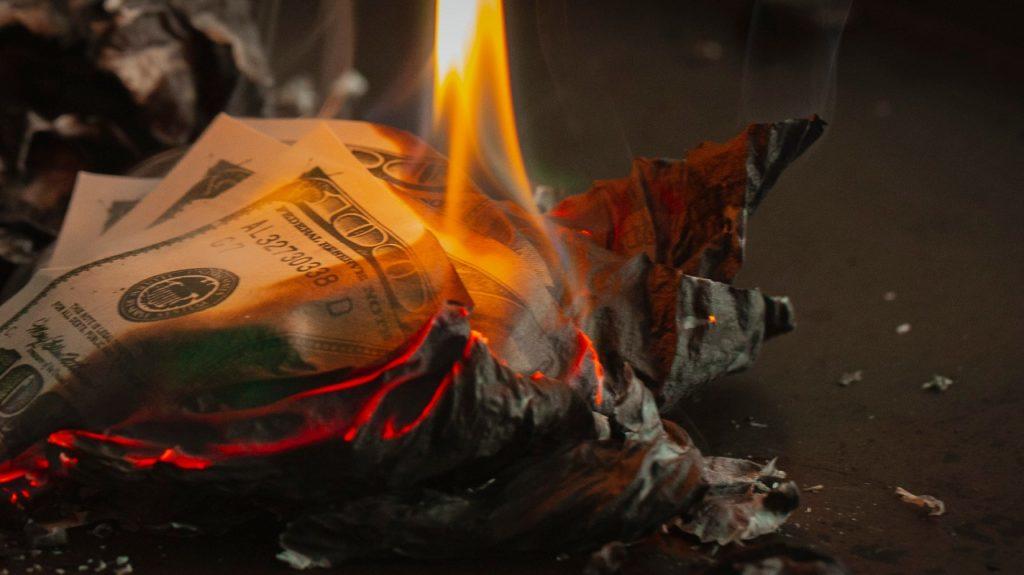 t’s easier to understand gold’s record-breaking move up if you look at it from the other side of the equation. The dollar is now at its all-time low compared to gold. 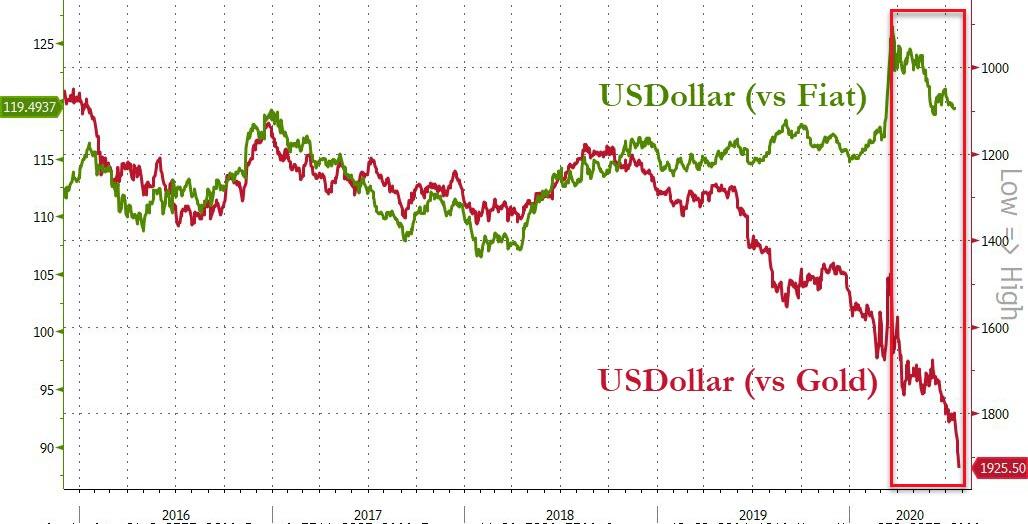 This is a direct result of US government borrowing and spending backed by Federal Reserve money printing.

TD Securities reiterated that dollar debasement is driving gold in a note.

“The USD weakens amid massive fiscal and central bank stimulus, a bloating debt pile and a slow growth environment.”

Since the economy crashed thanks to the governments’ shutdowns in response to the coronavirus, the federal government has borrowed trillions of dollars for its stimulus program. The June budget deficit was bigger than all but five of the yearly deficits in history. Meanwhile, the Fed is monetizing a big chunk of that debt through its government bond purchase program. In effect, it is buying up US debt and paying for it with money printed out of thin air.

All of this money creation is inflation. The rising price of gold reflects the inflationary pressure.

As more dollars go into circulation, each individual dollar is worth less, all other things equal. That’s why the price of gold is going up in dollar terms. We have more dollars chasing roughly the same amount of gold. That means it takes more dollars to buy an ounce.

This isn’t mere speculation. Money supply growth hit a new all-time high for the third month in a row in June. The only time we’ve seen money supply growth anywhere near this level was during the inflationary years of the 1970s. In June, year-over-year growth in the money supply came in at 34.5%. That was up from 29.5% in May. 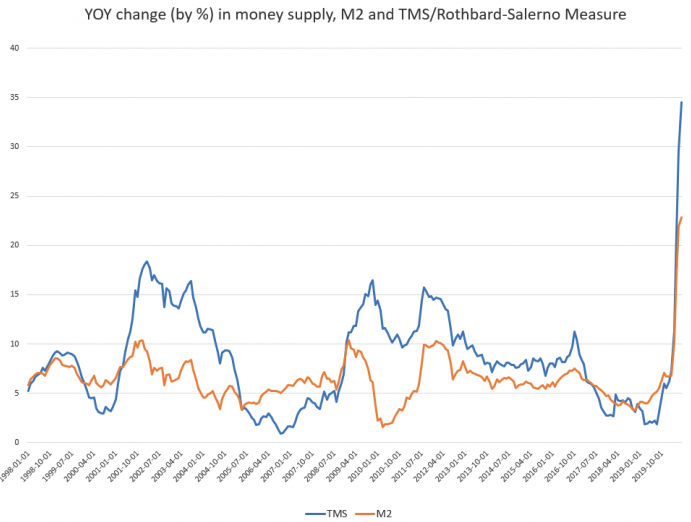 The “true” or Rothbard-Salerno money supply measure (TMS) – is the metric developed by Murray Rothbard and Joseph Salerno, and is designed to provide a better measure of money supply fluctuations than M2. The Mises Institute now offers regular updates on this metric and its growth. This measure of the money supply differs from M2 in that it includes Treasury deposits at the Fed (and excludes short-time deposits, traveler’s checks, and retail money funds).

As you can see from the chart, the Fed’s balance-sheet was already growing in late 2019 with the quantitative easing the central bank refused to call quantitative easing. But total Fed assets surged to over $7 trillion in June. That set a new all-time high and propelled the Fed balance sheet far beyond anything seen during the Great Recession’s multiple rounds of QE. The Fed’s assets are now up more than 600% from the period immediately preceding the 2008 financial crisis.

Some people in the mainstream are speculating that gold could be near its top. But that would assume the money printing is about to come to an end. There’s no reason to believe that. As Peter Schiff tweeted after gold pushed above its record price:

This record won’t last long as the dollar’s decline is only just getting started. It’s about to plunge to new depths taking the American standard of living down with it.”

Congress is working on another stimulus package that will mean trillions more in borrowing and spending. And the Fed will have to monetize all that debt. Jerome Powell has already committed to “do whatever we can, for as long as it takes.”

In other words, there is no reason to believe the monetary debasement is going to end any time soon. That’s extremely bullish for gold – and silver too.

We find that the Fed will need to provide significant accommodation – roughly equal to a fed funds rate of -5% — and that QE and forward guidance could be insufficient. Assuming limited impact from forward guidance given that markets are pricing negative rates, our estimates range from an additional $5tn to $12tn more of balance sheet expansion needed. Our  preferred calibration sits towards the high end of that range.”

We may see some profit-taking and corrections in the price of gold in the near-term, but given the economic dynamics and the trajectory of government and central bank policy, it appears gold still has a long way to run up.