– “…Where the Great Financial Crisis in 2008 could have been — and should have been — a wake-up call to operate the system more equitably and sustainably, it was used instead as an excuse to make things even worse. No bank executives were charged or even went to jail for any crimes they played in bringing the financial system to the brink of disaster.  Accounting deceit, wire fraud, and forgery — anybody remember ‘robosigning’?  That was forgery, a felony, and not one charge was ever leveled.  Instead, the Too Big To Fail banks were bailed out and got bigger”

Like a windstorm toppling a hollowed-out tree, SARS-CoV-2 didn’t cause the current recession so much as it exposed how rotten things already were.

Even before SARS-CoV-2, households were struggling. Far too many were limping along without any savings at all, one crisis away from financial ruin.

Debts at every level were at record highs before SARS-CoV-2 came along, and the Federal Reserve was already busy bailing out the US financial system before the virus hit.

The shale oil industry had failed to generate any profits for over a decade before anyone ever heard of Covid19.

The worldwide wealth gap was already record levels before we were forced into lockdown.

What the coronavirus pandemic has done, though, is give the ruling authorities aircover to accelerate all of these trends to warp speed.

Billionaires have been, by far, the largest winners in this story so far.  Ditto for mega corporations.  Main Street and small and medium-sized businesses have been utterly crushed.

Where the Great Financial Crisis in 2008 could have been — and should have been — a wake-up call to operate the system more equitably and sustainably, it was used instead as an excuse to make things even worse.

No bank executives were charged or even went to jail for any crimes they played in bringing the financial system to the brink of disaster.  Accounting deceit, wire fraud, and forgery — anybody remember ‘robosigning’?  That was forgery, a felony, and not one charge was ever leveled.  Instead, the Too Big To Fail banks were bailed out and got bigger at the expense of smaller, more responsible firms.

My point here is that SARS-CoV-2 has laid bare our true value systems.  Some countries have done an admirable job of showing they care about their citizens, making public safety and health their top priority.  Other countries, such as mine (the US), have demonstrated the opposite.

When it comes to making judgment, I look at actions much more than words. What have been the actions of the US authorities so far?

In other words, the Fed has made its #1 priority the preservation of the financial advantages of the already-rich, while the federal government has made clear that public health isn’t really a priority at all.

The unfairness and legal and moral wrongness of this next bit of news stunned even long-time skeptics like myself: 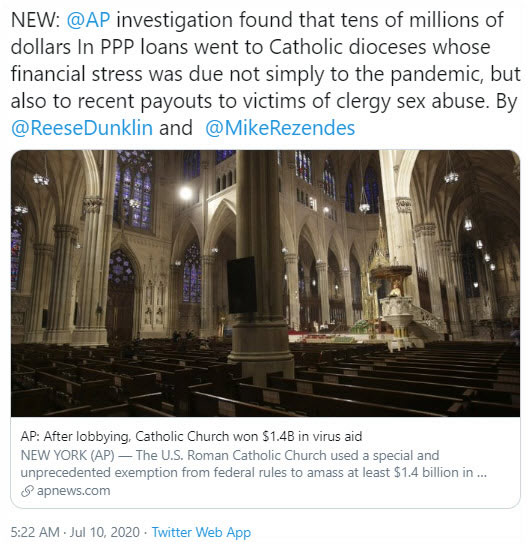 I object strenuously to any taxpayer money, my money, being sent to any and all religious organizations (I’m a big believer in the separation of church and state).  But to do so to help the Catholic church cover shortfalls due to payouts to victims of institutionalized pedophilia?  Really, that’s just…I’m out of words.

But more often than not, that’s the business the federal government is in: protecting the abusers, not the victims.

Thousands of hedge funds and other extremely wealthy financial firms are similarly feeding from the same trough of substantial taxpayer payouts.

But where real support is needed? The free money river has never been more than a trickle. Testing for SARS-CoV-2 has been throttled back due to lack of funding. Hospitals remain chronically short of critical PPE. 30% of all US households were unable to make last month’s mortgage payment.

As I said, these dots simply reveal the values and priorities of those running the show.  If I were to use a single word to sum things up, it would be: greed.

Anything and everything that funnels money from the many into the pockets of the few is being done and done swiftly.  Anything monies directed to the well-being of the masses is being done slowly, grudgingly, and sparingly (if at all).  “Never let a good crisis go to waste” is the motto of current crowd in charge.

I am asked all the time to decide between Covid-19 being real or this whole thing being a scam.  To which I reply, “why not both?”

The Elites Have Won

The elites have all the power and they have no interest in sharing any of it.  They are too blinded by greed and driven by fear to do otherwise.

In this way, they pretty much have won.

They’ll print up however much money they desire and hand it out to themselves — after, of course, laundering it through the ““markets”” to create the appearance that fairness was actually involved.

But we all know it’s not. The data is crystal clear: Wall Street’s mighty siphons assure that nearly all of the Fed’s freshly printed money goes straight into the pockets of the most well-connected players.

As I’ve taken pains to point out, given all the public’s focus on Black Lives Matter, somehow the Federal Reserve has escaped being called out for being a nearly pure-white organization whose efforts overwhelmingly funnel additional funds to white households.  Whether by design or accident, the Federal Reserve’s actions do more to cement racial inequality than any other entity, group, or organization in existence.  By far.

Looked at another way, Trump is soothed by the stock market hitting new all-time highs and I believe this has blunted the seriousness with which he takes SARS-CoV-2.  In jamming the stock markets higher, I see the Federal Reserve as also partly responsible for the lame US response to Covid, which has already cost far too many people their lives and many more people their health.

Of course, intervening in the financial markers to push them higher during an election year is a profoundly political act. Something the Fed has absolutely no business doing.

Put all that together and the Federal Reserve is a partisan, political organization that is costing people their lives and health while promoting racial inequality.

Yet it’s given a nearly free pass on all of that from the mainstream press, our supposed watchdog for truth.  Hardly is Fed Chair Jerome Powell ever asked a single daunting question along these lines.

Our health organizations like the CDC and the WHO are similarly compromised and complicit, too shot through with political intrigue and pharma money to be of any help.

All of which is both shameful and self-injurious, because if we’d like to avoid a very dark future filled with societal unraveling, then the Fed’s dangerous actions need to be brought to heel. And soon.

However, after all that has transpired, I don’t see much hope of the Fed changing its ways.  It has proven it can’t be goaded or shamed into introspection or altering course.

All of which is my way of saying that I am bracing for impact.

I simply don’t know what else to do.  We are on our own.

It’s time to consider how you will provide your family with the basics, the very bottom layers of Maslow’s Hierarchy of Needs — water, food, shelter, resources, health & safety — if the systems we depend on today start weakening: 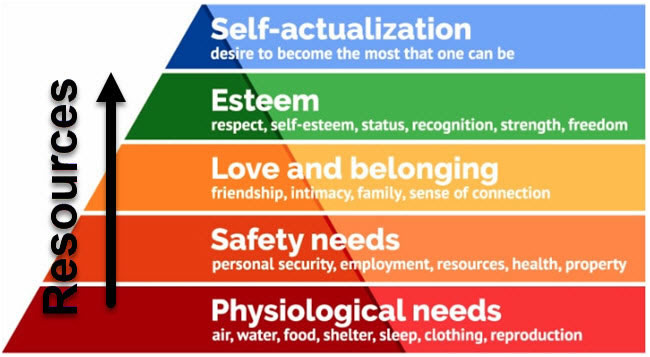 When people are busy moving down the Hierarchy of Needs, that means society is crumbling.

And folks are already indeed moving. Literally. Real estate for sale in Manhattan is piling up without takers, while more rural properties are being snapped up.  Gardens are being planted and guns are being bought.

SARS-CoV-2 has taught many lessons and revealed much.  To me, it’s revealed that the elites as led by the Federal Reserve won’t deviate from accelerating inequity until being forced to stop.  Whether that will occur via social revolution, the destruction of the purchasing power of the US dollar, or something else, I don’t know.

But I do know that whatever it is, it won’t be the cause of all the misery that will follow.  The true culprits are the current and former managers (not leaders) with the Fed and within the DC beltway who failed to protect the vulnerable, set reasonable policies, and conduct themselves with integrity.

So my advice is to brace for impact.  There’s nothing any of us can do to affect national monetary policy or stop the major unraveling trends already set in motion, but we can do our best to step outside harm’s way and tend the welfare of ourselves and those we care about as the system falters

A Serious Message From Chris Martenson