– “…Dr. Osterholm is the Director of Infectious Disease Research and Policy. This is the same epidemiologist who ten years ago, predicted a coronavirus would come from China and turn our country upside down. In his book “Deadliest Enemies,” he anticipated the utterly irresponsible way in which the media would report on the situation, the completely opportunistic and shamelessly political way our leaders would likely react, and the unprecedented chaos and confusion that would arise from all the mixed messages from the medical community”

SM: …Manufactured hysteria is the go-to ‘hot button’ precisely because brow-beaten subjects can be herded into self-serving & counter-intuitive agenda’s on command….

Mike Rowe became famous as the “Dirty Jobs” jobs guy on the Discovery Channel show that ran from 2005 to 2012. He’s now got a show called Somebody’s Gotta Do It, and he’s recently been filming episodes for that show.

Over the years, Rowe has impressed people, not only with his willingness to try his hand at dangerous and dirty jobs, but for his good sense of humor and his admirable pragmatism. That was on display when he explained that the virus will not stop him from working on his television show. He believes the virus will do what it’s going to do and, therefore, he refuses to give in to panic or stop living. 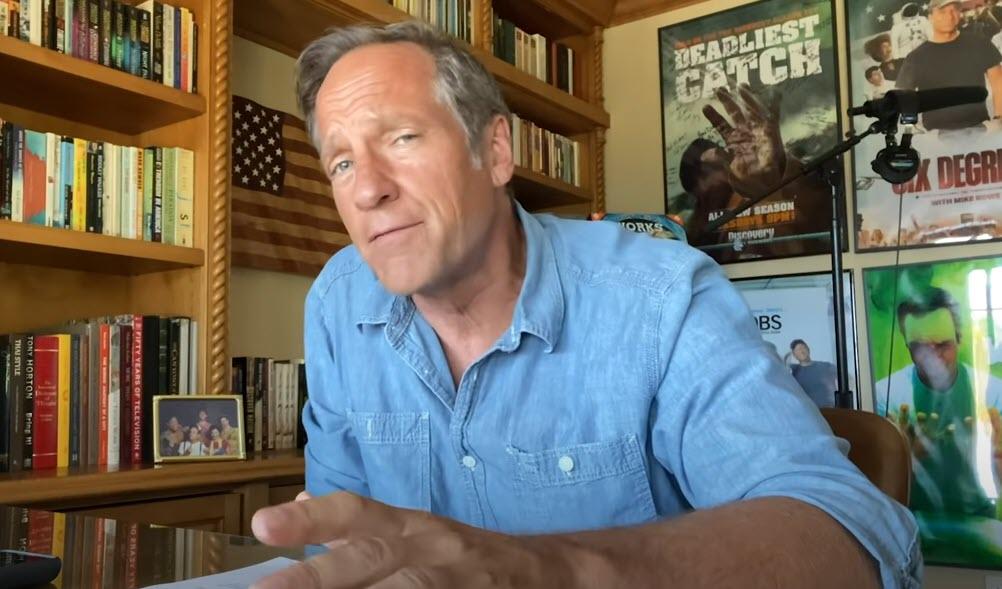 On his Facebook page, Rowe will occasionally answer letters from people. The most recent letter came from Darlene Gabon, who thought he was being irresponsible to continue working while the Wuhan virus is still out there:

In a recent post, you said you’ve been to Tennessee and Georgia, giving speeches and filming for your new show. Before that, you were on the road shooting for Dirty Jobs. Is it really so important to film a television show in the midst of pandemic? Is it responsible of you to encourage this kind of behavior when infection rates are spiking? Don’t you watch the news? More and more cases every day – aren’t you concerned?

Rowe’s answer is a wonderful distillation of intelligent science combined with calm rationality. Had he been in charge of every state’s response to the Wuhan virus, our economy wouldn’t be in a nosedive and people wouldn’t be pepper sprayed for having picnic lunches with their families:

On March 15th, the day after my part of the country was locked down, I posted a link to an interview with Dr. Michael Osterholm. I’m posting it again, because I believe you and everyone else in the country would benefit from listening carefully to what he has to say.

Dr. Osterholm is the Director of Infectious Disease Research and Policy. This is the same epidemiologist who ten years ago, predicted a coronavirus would come from China and turn our country upside down. In his book “Deadliest Enemies,” he anticipated the utterly irresponsible way in which the media would report on the situation, the completely opportunistic and shamelessly political way our leaders would likely react, and the unprecedented chaos and confusion that would arise from all the mixed messages from the medical community. His resume is unexampled, https://bit.ly/3jvzQTW, and his analysis of the situation is the most logical and persuasive of any I’d heard so far. He’s also the only expert I know of who hasn’t walked back his numbers, reconsidered his position, or moved the goalposts with regard to what we must do, what we can do, and what he expects to happen next. I say all of this because Dr. Osterholm publicly predicted – in early MArch – that we could conservatively see over 100 million COVID cases in this country, with a very strong possibility of 480,000 fatalities – even if we successfully “flattened the curve.”

It took me a few weeks to accept this scenario, because 480,000 fatalities is a frightening number, and lot of other experts were saying lots of conflicting things. But eventually, I came to the conclusion that Dr. Osterholm was probably correct, and quickly navigated the four stages of grief that usually precede acceptance – denial, anger, bargaining, and depression. By late April, I had come to accept Dr. Osterholm’s predictions as a matter of fact. Since then, I’ve had three full months to come to terms with the fact that, a) I am probably going to get COVID-19 at some point, b), I am almost certainly going to survive it, and c), I might very well give it to someone else.

I hope that doesn’t sound blasé, or glib, or fatalistic, or selfish. Four-hundred eighty thousand deaths is an obvious tragedy, and I’m deeply sympathetic to all who have been impacted thus far. I’m also very concerned for my parents, and everyone else in a high risk category. But when Dr. Osterholm says that COVID can be slowed but not stopped, I believe him. When he says a vaccine will not necessarily hasten herd immunity, I believe him. And when he says that people have confused “flattening the curve” with “eliminating the virus,” I believe him.

Thus, for the last three months, I’ve been operating from the assumption that this is a year-round virus that’s eventually going to infect 100 million people and kill roughly 1/2 of one percent of those infected, conservatively. I’ve accepted those numbers. Unfortunately, millions of others have not. Many people have no sense of where this is headed, and I understand why. They’ve been betrayed by a hysterical media that insists on covering each new reported case as if it were the first case. Every headline today drips with dread, as the next doomed hotspot approaches the next “grim milestone.” And so, for a lot of people, everyday is Groundhogs Day. They’re paralyzed by the rising numbers because the numbers have no context. They don’t know where it will end. But Dr. Osterholm says he does, and I’m persuaded that he’s correct. He might be wrong, and frankly, I hope he is, but either way, he’s presented us with a set of projections based on a logical analysis, and accepting those projections has allowed me to move past denial, anger, bargaining, and depression, and get on with my life with a better understanding of what the risks really are.

Fact is, we the people can accept almost anything if we’re given the facts, and enough time to get evaluate the risk and make our own decisions. Last year in this country, there were six million traffic accidents and 36,000 fatalities. Tragic, for sure. But imagine for a moment if no one had ever died from a car accident. Imagine if this year, America endured six million traffic accidents and 36,000 fatalities…for the first time ever. Now, imagine if these accidents and fatalities – over 16,000 and 90 per day respectively – imagine if they were reported upon like every new incidence of COVID. What would that do to our willingness to drive? For a while, I suspect it would keep us all off the roads, right? I mean, six million accidents out of the blue is a lot to process, and 36,000 deaths is scary – especially if you don’t know how high that number could get. It would take us a while to access the risk, before we blindly hopped into our cars again. Eventually though – after getting some context and perspective – we’d be able to evaluate the relative danger of operating a motor vehicle. Then, we could decide for ourselves when to drive, where to drive, and how much to drive. And so we do.

Again, don’t misunderstand. I’m not ignoring COVID, or downplaying COVID, or pretending the risks at hand aren’t real. Nor am I comparing COVID cases to car accidents – I’m simply comparing the fear of each to the other, and the fear that always accompanies uncertainty. I don’t want to get this disease or give it to someone else, any more than I want to be in a car car wreck that injures someone else. But I’ve accepted certain things about the pandemic, and now, I’ve gotten used to the risk as I understand it. I take precautions. I get tested as often as I can, and if I can’t physically distance, I wear a mask – especially around higher risk people. Likewise, I wear a seatbelt, obey the speed limits, and check my mirrors before changing lanes. Yes – I’m aware that we’d all be a lot safer if we kept our cars in the garage. I’m also aware we’d be a lot safer if we all kept ourselves in the house. But that’s not why cars, or people, exist.

Anyway Darlene, that’s a long way of saying that I have accepted Dr. Osterholm’s numbers, and now, after three months of acceptance, I’ve made a decision on how I wish to live my life. Sooner or later, you will too. We all will.

PS. My foundation is selling masks to raise money for our next work-ethic scholarship program. They’re going fast… https://www.bfit540.com/products/mike-rowe-works-face-mask

That is exactly right. A short shutdown would have allowed hospitals to get their ducks in a row for handling patients. Everything else we’ve been through has been hysterical insanity.

One thought on “FEAR FACTOR: Mike Rowe – “Reality” Is Going To Win Against COVID Fearmongering”