– “…By all indications, the Deep State has already invoked its “Samson Option” as the ongoing lockdowns have already affected not just the global economy, but mostly their big corporate infrastructures, too”

As you can observe in the past few weeks, the Deep State has launched all types of offensives against Russia and China in order to remain relevant. Fence sitting actors are also playing their part to project that they are actually for one side over another. But who’s going to win in the final battle between full spectrum dominance and multipolarity? 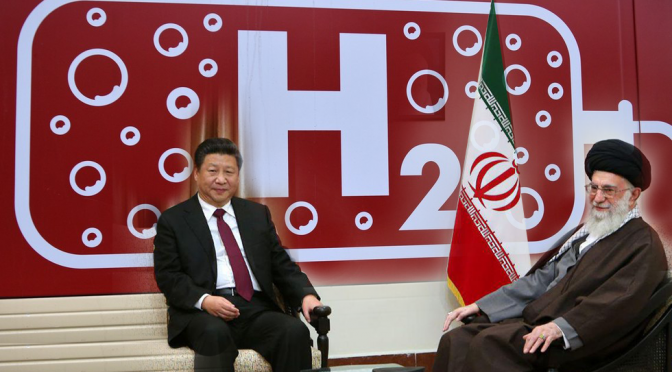 For the Russians, a decisive action must be taken to mitigate the effects of the declining oil prices that primarily propels their own economy.

According to an RT report,

Russia’s move away from hydrocarbons took another step forward this week, as the country’s Ministry of Energy announced a roadmap to start producing clean hydrogen by 2024.

With much of the world planning to pivot away from oil and gas in the near future, the country’s government is looking ahead to a more diversified energy sector. The international ‘green’ trend is a significant threat to the Russian economy, which is at present largely dependent on the export of oil, gas, and coal. Starting from 2021, the government intends to build on the country’s reputation as a hydrogen supplier, aiming to make exports of the world’s most abundant gas a large part of its energy sector.

According to the document published by the Ministry of Energy, Gazprom will begin to develop and test a methane-hydrogen turbine in 2021, with a view to using clean energy to power various modes of transport.

Other than Gazprom and Rosatom, Russia’s second-largest natural gas producer Novatek also announced its interest in entering the hydrogen market, with a company spokesman telling Russian newspaper RBC that “hydrogen will play a significant role in the future energy balance.”

The effect in the US shale oil industry and banking is immediate:

… In the spring, just after the oil price collapse, a survey by law firm Haynes and Boone among oil and gas producers, oilfield services companies, financial institutions, and private equity firms showed that a sizable majority of respondents expected borrowing bases to decrease by at least 20 percent in response to the commodity price crash, while 45 percent of respondents expected even deeper cuts of 30 percent or more.

According to Bloomberg sources familiar with some loan reviews lenders have made for shale firms, the loans the banks are willing to extend to drillers are not only shrinking in amount, but are also becoming more expensive to repay.

Some banks are also concerned that in case of defaults and potential swaps of debt into equity, they may end up owning oil and gas assets which they have no experience in managing, according to Bloomberg.

“A third of the banks doing upstream energy lending will no longer be doing that in the next couple of years,” David Baggett, managing partner at energy business advisory Opportune LLP, told Bloomberg.

Oil revenues for the world’s largest oil exporter, Saudi Arabia, continued to slide in May after the Kingdom ended its oil price war with Russia, with the income from oil exports plunging by 65 percent year on year, data from Saudi Arabia’s General Authority for Statistics showed on Thursday.

Saudi Arabia’s total exports plunged in May 2020 compared to May 2019. The significantly lower value of oil exports was the main drag on overall Saudi merchandise exports in May – the first month in which the OPEC+ group cut production by record levels after Saudi Arabia and Russia forged a new deal to cut supply to the market amid the demand crash in the pandemic.

The value of Saudi Arabia’s oil exports plunged by US$11.8 billion (44.277 billion Saudi riyals), or by 65.0 percent year on year in May, the General Authority for Statistics said.

The drop in oil revenues for May follows a similar drop of US$12 billion in Saudi oil revenues for April, when the Kingdom made good on its promise to flood the market with oil and contributed to the oil price plunge to the lowest since 1999 together with the crash in demand during the lockdowns in Europe and the United States.

… Earlier in July, the International Monetary Fund (IMF) said that the price plunge and the production cuts would hit oil exporters in the Middle East and North Africa (MENA) hard, with the combined oil income for those countries expected to plummet by US$270 billion this year compared to 2019.  – OilPrice.com

On the other hand, China’s oil energy needs can be adequately satisfied by the potentially high yielding oilfields in Iran, on top of those already coming from Venezuela, and the natural gas from the Power of Siberia. So, it has decided to give the country the same sizable gift it gave to Russia some years ago.

Secretary of State Mike Pompeo called violent attacks on Saudi oil infrastructure in Abqaiq and Khurais “an act of war,” as evidence suggests that Iran is the culprit. This marks the most dangerous escalation between the U.S. and Iran since the seizure of the American embassy in Tehran. However, this confrontation has major implications for the growing U.S. – China strategic rivalry.

Amidst historic U.S. – Iran tensions, Beijing is doubling-down on its strategic partnership with Tehran, ignoring U.S. efforts to isolate the Islamic Republic from global markets. Following an August visit by Iran Foreign Minister Mohammad Javad Zarif to Beijing, the two countries agreed to update a 25-year program signed in 2016, to include an unprecedented $400 billion of investment in the Iranian economy – sanctions be damned.

The capital injection, which would focus on Iran’s oil and gas sector, would also be distributed across the country’s transportation and manufacturing infrastructure…

The central pillar of the new deal is that China will invest $280 billion developing Iran’s oil, gas and petrochemicals sectors… there will be another $120 billion investment in upgrading Iran’s transport and manufacturing infrastructure, which again can be front-loaded into the first five-year period and added to in each subsequent period should both parties agree.

This comes at a time when Washington is exerting its so-called ‘maximum pressure’ strategy against Iran, which aims to change its international behavior by bringing oil exports down to zero.

The Trump policy is a 180 degree U-turn form the sanctions relief granted by the previous administration’s Joint Comprehensive Plan of Action (JCPOA). – Forbes.com

The Eastern Alliance has formulated the idea, about two decades ago, that in order to end the rule of the Deep State that is responsible for the never-ending wars for oil and financial power, they must end their cooperation with the Deep State, and instead help all other smaller economies withstand any external attacks through economic, and military intelligence means.

The end result certainly makes life difficult for the Western population, but the latter has also failed to take any decisive actions to topple their deeply embedded organized criminal cabal of suit wearing executives from the banking, media, military and intelligence sectors, and the pedophiles from their organized religion.

As the Alliance attacks on the Deep State have later on gained momentum, thousands of bank CEOs have resigned together with Pope Maledict in 2012 and 2013, and the years thereafter. This should have provided the necessary impetus for the Western population to rise up against their enemies from within.

Obviously, it’s not yet the end of the world for the Deep State because their people are still entertaining the idea that, somehow, economic miracles could still happen with their choices between Trump and Biden.

Nevertheless, the Deep State’s undeniable panic from these threats to their power has led to the multiple releases of bioweapons that could easily be blamed on the Wuhan bioweapons lab. But we’ve already seen how the Zionists did the same false flag operations in New York and elsewhere on the globe, including the friendly attack on the USS Liberty that the US Congress is yet to acknowledge officially.

Nothing should surprise us anymore as to where these low budgeted attacks, e.g. crisis actors or bioweapons, will be coming from. But it surely pays to be ready all the time.

By all indications, the Deep State has already invoked its “Samson Option” as the ongoing lockdowns have already affected not just the global economy, but mostly their big corporate infrastructures, too