– “…Both Israel and the US have a history of collaboration when it comes to covert action designed to retard Iran’s nuclear and ballistic missile capabilities. Perhaps the best known of these was the Stuxnet virus, which struck the Natanz facility in the summer of 2010 and was responsible for the destruction of a large number of centrifuges used to enrich uranium. Less known, but as or more effective, is a long-term CIA program to sabotage Iranian missiles and rockets, including those involved in Iran’s space launch program”

‘Iran Explosions’, Did Israel and the US just start a Cyber War? – By Scott Ritter 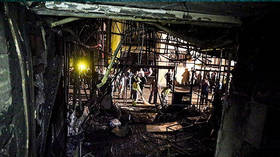 People gather at the site of an explosion at a medical clinic in the north of the Iranian capital Tehran, Iran, June 30, 2020 © Tasnim News Agency/Handout via REUTERS
Explosions rocked a pair of Iranian factories involved in the manufacture of centrifuges for its nuclear program, and the development of advanced ballistic missiles. Iran suspects a cyberattack by either the US, Israel or both.

A series of explosions hit various locations throughout Iran in late June and early July, killing scores of people and causing extensive damage. Two of these locations stand out in particular because of their importance to Iran’s national security, and their involvement in technology related to nuclear enrichment programs and ballistic missile production, which have been singled out by both the US and Israel as representing a threat to regional and international peace and security.

Early on Friday, a series of explosions reportedly hit the outskirts of Tehran, as well as the cities of Garmdareh and Qods, with speculation that missile depots were the intended target of the blasts. 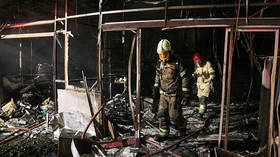 The precise cause of the two explosions has not yet been determined. One, at a centrifuge production hall located in the Natanz Fuel Enrichment Plant, remains under investigation. The other, at the Hemma Missile Industries Complex, has been linked to an explosion in a gas tank.

In typical fashion, Israel denied having any involvement in the Iranian explosions, while at the same time indicating that it was concerned about the Islamic Republic’s activities. Israeli Minister of Defense Benny Gantz noted that “not every incident that transpires in Iran necessarily has something to do with us.”

Gantz then threw in a hint about what might have happened. “All those systems,” he said, referring to Iran’s nuclear and missile activities, “are complex. They have very high safety constraints, and I’m not sure [the Iranians] always know how to maintain them.”

Israel’s Foreign Minister Gabi Ashkenazi – who himself was once head of the Israeli Defense Force – was more circumspect. “We have a long-term policy over the course of many administrations not to allow Iran to have nuclear abilities,” Ashkenazi noted. “This [Iranian] regime with those abilities is an existential threat to Israel, and Israel cannot allow it to establish itself on our northern border.” As to what Israel may have done to prevent this, he said:

We take actions that are better left unsaid.

Both Israel and the US have a history of collaboration when it comes to covert action designed to retard Iran’s nuclear and ballistic missile capabilities. Perhaps the best known of these was the Stuxnet virus, which struck the Natanz facility in the summer of 2010 and was responsible for the destruction of a large number of centrifuges used to enrich uranium. Less known, but as or more effective, is a long-term CIA program to sabotage Iranian missiles and rockets, including those involved in Iran’s space launch program.

Perhaps the most public face of this program came in the form of a tweet from President Trump in August 2019, following the explosion of an Iranian space vehicle on its launch pad during final preparations for blast-off. “The United States of America,” Trump tweeted, “was not involved in the catastrophic accident during final launch preparations for the Safir SLV Launch at Semnan Launch Site One in Iran. I wish Iran best wishes and good luck in determining what happened at Site One.” As non-denials go, this one was crude and transparent.

The heart of the CIA sabotage effort lies in its ability to infiltrate the illicit black-market supply chains used by Iran to support its programs, and infiltrate defective materials which, once installed, would cause catastrophic failure. Gantz’s allusion to the complexity of Iran’s nuclear and ballistic missile endeavors, and the “safety” issues involved (and Iran’s inability to maintain these systems), provides strong circumstantial evidence that Israel, most likely in collaboration with the CIA, was able to gain access to suppliers involved in the construction of both the Natanz and Hemmat sites. This probably involved the distribution of natural gas for industrial purposes. Defective sensors and/or valves could lead to catastrophic failure, and result in massive, highly destructive events.

Not every incident in Iran ‘necessarily has something to do with us,’ Israeli defense chief says after fire at Natanz nuclear site

The official Iranian position is that while it has identified the precise cause of the explosions in question, it is not releasing this information on the grounds of national security. This delay would make sense in the case of any sabotage derived from defective sensors and valves – Iran would need to reverse-engineer its acquisition efforts, identify all materials acquired together with the failed components, and safely remove them from wherever they had been installed. Iran would also need to try and find out how and where their counterintelligence and security systems failed, before implementing new procedures.

The lack of a specific explanation, however, has not prevented senior Iranians from speculating about either the cause of the explosions, or the perpetrators. “Responding to cyberattacks is part of the country’s defense might,” the head of Iran’s civil defense, Gholamreza Jalili, noted. “If it is proven that our country has been targeted by a cyberattack, we will respond.” 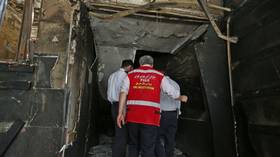 Explosion kills at least 2, injures 3 at factory near Tehran (VIDEO)

The Iranian News Agency, IRNA, hinted at the potential for a larger crisis emerging in the aftermath of the Natanz and Hemmat explosions. “So far, Iran has tried to prevent intensifying crises and the formation of unpredictable conditions and situations,” IRNA observed. “But the crossing of red lines of the Islamic Republic of Iran by hostile countries, especially the Zionist regime (Israel) and the US, means that strategy… should be revised.”

It is unlikely that Iran would seek to respond to any destructive cyberattack in a disproportionate manner – don’t expect missiles to fly against either Israel or US bases in the region. Instead, Iran will probably deploy its own very capable offensive cyberweapons in targeted retaliation, either against facilities in Israel and/or the US, or against regional targets affiliated with either of those countries.

Cyber warfare is a new phenomenon, one which can inflict significant collateral damage on civilian infrastructure both in the targeted nation, as well as third parties not directly involved in the conflict at hand. If Israel and/or the US were, in fact, to have conducted a destructive cyberattack on Iran, there will almost certainly be retaliation. Where this cycle of cyber warfare will end, however, is unknown. Given the complex realities of cyber warfare, where computer viruses are released in a manner conducive to causing a global cyber pandemic, the question must be asked if the outcome achieved at Natanz and Hemmat was worth the potential risk accrued. If history is any lesson, the answer is – and will be – a resounding ‘No.’