Stealthily, surreptitiously, and with sweeping precision, the Chinese Communist Party (CCP) began a decades-long war against America for world domination by utilizing a military strategy known as “unrestricted warfare” that continues today. 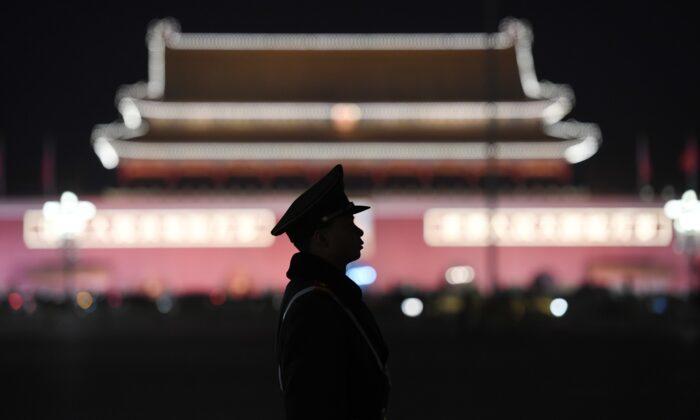 Unbeknownst to most of the population, the CCP has infiltrated almost every major avenue of life in the United States – leaving virtually no industry untouched. While this threat has largely existed undetected, the effects it’s had on the nation, as well as its geopolitical consequences, are far-reaching.

Skirting the traditional, direct military confrontation offensives that have become somewhat outdated in modern times, this unconventional strategy has become central to the communist regime’s approach to warfare.

The strategy is highlighted in the 1999 book “Unrestricted Warfare,” authored by two Chinese air force colonels—Qiao Liang and Wang Xiangsui—and published by the People’s Liberation Army, the armed forces of the CCP. The book, which has been translated into English, is based on the original army documents.

Exploitation, infiltration, and espionage are all recurring themes. The CCP employs all of them to varying degrees simultaneously in multiple sectors of society in order to undermine or influence the United States—its main impediment to global domination.

While some examples are more obvious, such as China’s long history of intellectual property theft and unfair trade practices with the United States, others that use what it calls “soft power” are harder to detect.

One such avenue is its Party-backed Confucius Institutes (CIs) that infiltrate and operate on American college campuses in order to boost CCP’s image. It also aims to push a foreign policy goal of making the regime not only an economic superpower, but also a cultural one

CIs have attracted attention from lawmakers, national organizations, and the FBI over allegations that the program undermines academic freedom. The CIs have been accused of promoting Chinese communist propaganda under the pretense of promoting the Chinese language and history. There are thousands of CIs over the world and, by one count, at least 75 in America.

Other examples are more blatant, from a former chair of Harvard University’s chemistry department being recently indicted for making false statements about funding he received from China to a Chinese citizen who was found guilty of economic espionage, theft of trade secrets, and conspiracy.

In the latter case, a man identified as 41-year-old Hao Zhang was found to have attempted to steal trade secrets from two U.S. companies “for the benefit of the People’s Republic of China,” according to the Justice Department. Zhang stole information specifically related to the performance of wireless devices.

Economic espionage “is a pervasive threat throughout the United States, particularly to the San Francisco Bay Area and Silicon Valley, which is the center of innovation and technology,” John F. Bennett, special agent in charge of the San Francisco Division of the FBI, said of the case involving Zhang.

The Thousand Talents Plan, one of the more widely known CCP talent recruitment or “brain gain” programs, encourages theft of intellectual property from U.S. institutions, according to the FBI. By offering competitive salaries, state-of-the-art research facilities, and honorific titles, these programs lure talent from overseas into China, “even if that means stealing proprietary information or violating export controls to do so,” the bureau states.

FBI Director Christopher Wray testified in 2018 that the bureau was attempting to view the danger posed by China “as not just a whole-of-government threat, but a whole-of-society threat on their end.” To counter China’s strategy effectively, Wray said the United States must also employ a “whole-of-society response.”

Walter Lohman, director of The Heritage Foundation’s Asian Studies Center, said the United States has treated China’s “sensitivities” carefully, yet has received “nothing in return.”

“China’s aggressive behavior over the last 15 years or so has only gotten worse, despite our best efforts,” he told The Epoch Times.

China currently poses the biggest threat to the United States because it is “powerful across the range of indicators, and … is directly threatening so many American interests, like our communication networks, like Taiwan, freedom in Hong Kong, and freedom of the seas,” he said.

The CCP also has aggressively promoted and pushed its telecommunications companies, such as Huawei, and ZTE, as well as Chinese-owned apps like TikTok and Zoom, into the United States and around the world.

Lawmakers and U.S. officials have begun to realize the national security threats these Chinese companies pose. The Federal Communications Commission (FCC) in June formally designated Huawei and ZTE as national security threats, thus banning access to money from the FCC’s $8.3 billion a year Universal Service Fund to buy or modify any equipment or services provided by the suppliers.

One reason behind the decision, as FCC Chairman Ajit Pai notes, is that both companies are closely linked to the CCP and its military apparatus, in that they “are broadly subject to Chinese law obligating them to cooperate with the country’s intelligence services.” Both companies deny this.

Chinese-owned TikTok, which has seen meteoric growth in the United States, also was recently found to be secretly reading users’ clipboard data, although the app now claims that it has fixed the issue. There are similar concerns about Zoom, as researchers found that encryption keys were being transmitted to servers in China.

While the United States is stepping up its efforts to counter threats from Beijing, the communist regime is simultaneously ramping up its own aggressive endeavors through the CCP’s United Front Work Department.

This unit coordinates thousands of groups to carry out foreign political influence operations, suppress dissident movements, gather intelligence, and facilitate the transfer of other countries’ technology to China, according to a June report by the Australian Strategic Policy Institute.

Its political influence initiatives target foreign elites, including politicians and business executives, and are often covert in nature, the report said. Overseas Chinese communities are also key targets, with the Party seeking to co-opt and control community groups, business associations, and Chinese-language media.

With these CCP-backed companies, the regime is attempting to exert its influence over the entire globe, not just the United States. Some major programs backed by the regime that also play into its international ambitions are its Belt and Road Initiative (BRI) and its “Made in China 2025″ plan.

The CCP, through the BRI, injected billions of dollars into low-income countries in order to build their infrastructure projects. Since 2013, the initiative has launched more than 2,900 projects valued at $3.87 trillion. The BRI has been called a “debt trap” because of Beijing’s predatory lending practices, which leave countries vulnerable to China’s aggressive influence campaigns.

Over the past two decades, China has become a major global lender, with outstanding debt exceeding $5.5 trillion in 2019—more than 6 percent of global gross domestic product, a report by the Institute of International Finance stated.

And the CCP’s “Made in China 2025″ industrial plan, which was rolled out in 2015, seeks to make the country a global competitor in 10 tech sectors by 2025. In late 2018, Beijing also began “China Standards 2035” to accelerate efforts to become the leader in burgeoning tech sectors such as big data, artificial intelligence, and the internet of things (IoT).

Meanwhile, a report published in March determined that Beijing was exploiting the global CCP virus pandemic, which first broke out in Wuhan, China, to advance its economic goals and fulfill its wider ambitions.

“Beijing intends to use the global dislocation and downturn to attract foreign investment, to seize strategic market share and resources—especially those that force dependence [on China],” the report by Horizon Advisory, a U.S.-based independent consultancy, states. The group reviewed recent policies and notices announced by Chinese central government agencies, regional governments, and research institutes.

While a growing number of countries are expressing anger and frustration over Beijing’s botched handling of the outbreak, exacerbated by a wide-reaching coverup, backlash is also mounting against its efforts to brand itself as a global leader in combating the pandemic.

Beijing sent a slew of medical experts and supplies such as masks and respirators to countries where they were desperately needed in a bid to improve its image.

But the products it delivered often turned out to be defective, leaving countries no choice but to reject the faulty equipment. The Netherlands, Spain, Turkey, Finland, Britain, and Ireland are just some of the countries that received supplies found to be unusable.

“Authoritative Chinese sources state explicitly that the economic ravages and dislocation that COVID-19 creates give China an opportunity to expand its dominance in global markets and supply chains—both in the real economy and in the virtual domain,” the Horizon Advisory report states. “They also stress that the present crisis will allow Beijing to reverse U.S. efforts to protect its systems, and those of its allies, from China.”