– “…It would appear that the woke activists of BLM and their many kneeling supporters do not care about the plight of modern slaves, of which there are an estimated whopping 40 million today. Evidently, it is far easier, and presumably more pleasurable, to destroy Western historical monuments than to embark on the difficult work of actually abolishing modern slavery”

SM:...Modern slavery in all it forms, is the most vile of abominations before us today. As citizens of this world, we must take the fight to every corner of the globe to eradiate this blight that stains our communal soul….

The actions have caused some local authorities to consider whether all statues perceived as offending current sensibilities should be removed. The London Mayor Sadiq Khan announced a commission to examine the future of landmarks, such as statues and street names, in the UK capital. 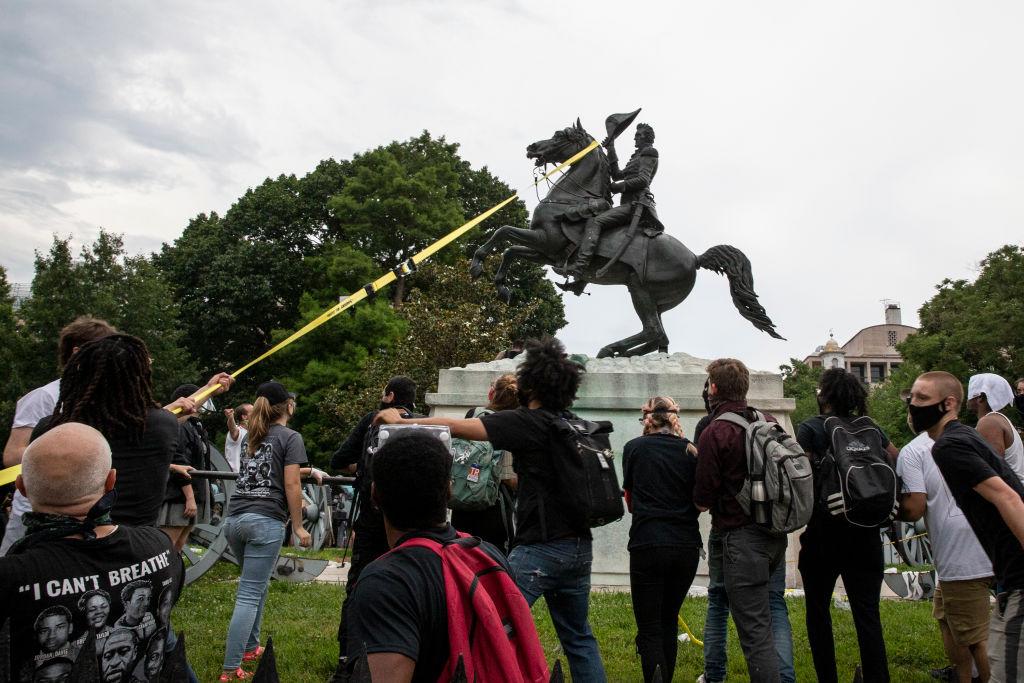 What is not apparent is how attacking old statues of people who have been long dead is supposed to help anyone, especially millions of black and non-black people, who are still enslaved today. It would appear that the woke activists of BLM and their many kneeling supporters do not care about the plight of modern slaves, of which there are an estimated whopping 40 million today. Evidently, it is far easier, and presumably more pleasurable, to destroy Western historical monuments than to embark on the difficult work of actually abolishing modern slavery.

In the UK itself, there is a shocking range of modern slavery, something that the local wokesters are happy to ignore as they bravely attack statues of stone and metal. According to the UK government’s 2019 Annual Report on Modern Slavery, there are at least 13,000 potential victims of slavery in the UK, although as that number dates back to 2014, it is questionable. According to the 2018 Global Slavery Index, there are an estimated 136,000 people living in modern slavery just in Britain.

Slavery in the UK takes the form of forced labor, and domestic and sexual exploitation. Albanians and Vietnamese are among the groups that constitute the majority of slaves. British news outlets have run several stories about the estimated thousands of Vietnamese, half under the age of 18, who are kidnapped and trafficked to the UK where they are forced to work as slaves on cannabis farms. There, they form a small part of the “vast criminal machine that supplies Britain’s £2.6bn cannabis black market”. Those who are not forced to work in the cannabis industry are enslaved in “nail bars, brothels and restaurants, or kept in domestic servitude behind the doors of private residences”. In January, BBC news ran a story about a Vietnamese boy named Ba, who was kidnapped by a Chinese gang and trafficked to the UK, where his Chinese boss starved him and beat him whenever one of the cannabis plants failed.

BLM may not care much about Vietnamese lives in the UK — after all, they are all about black lives, so how about black slaves in Africa? There are currently an estimated 9.2 million men, women and children living in modern slavery in Africa, according to the Global Slavery Index, which includes forced labor, forced sexual exploitation and forced marriage.

“According to the U.N.’s International Labor Organization (ILO), there are more than three times as many people in forced servitude today as were captured and sold during the 350-year span of the transatlantic slave trade”, Time Magazine reported in March 2019. According to the ILO, modern slavery has seen 25 million people in debt bondage and 15 million in forced marriage.

Modern slavery earns criminal networks an estimated $150 billion a year, just slightly less than drug smuggling and weapons trafficking. “Modern slavery is far and away more profitable now than at any point in human history,” Siddharth Kara, an economist at the Carr Center for Human Rights Policy, told Time. According to the 2018 Global Slavery Index, “G-20 countries import some $354 billion worth of products at risk of being produced by modern slavery every year”.

In 2017, shocking footage emerged from actual slave auctions in Libya: CNN documented an incident in which Arabic-speaking men sold off twelve Nigerians. In 2019, Time Magazine interviewed an African migrant, Iabarot, who had been sold into slavery on his way to Europe:

“When Iabarot reached Libya’s southern border, he met a seemingly friendly taxi driver who offered to drive him to the capital city, Tripoli, for free. Instead, he was sold to a ‘white Libyan,’ or Arab, for $200. He was forced to work off his ‘debt’ on a construction site, a pattern that repeated each time he was sold and resold.”

Sex trafficking forms a considerable part of modern slavery. The Nigerian mafia, for instance, according to a 2019 report by the Washington Post, is trafficking women by the tens of thousands:

“Some experts say that as many as 20,000 Nigerian women, some of them minors, arrived in Sicily between 2016 and 2018, trafficked in cooperation with Nigerians in Italy and back home.”

According to a July 2017 report by the UN’s International Organization for Migration (IOM):

“Over the past three years, IOM Italy has seen an almost 600 per cent increase in the number of potential sex trafficking victims arriving in Italy by sea. This upward trend has continued during the first six months of 2017, with most victims arriving from Nigeria”. In its report, IOM estimated that 80 per cent of girls, often minors, arriving from Nigeria — whose numbers soared dramatically from 1,454 in 2014 to 11,009 in 2016 — were “potential victims of trafficking for sexual exploitation”.

In parts of the African continent, especially in the Sahel, slavery is still ingrained in traditional culture, even though, officially, slavery has been outlawed. In countries such as Mali and Mauritania, so-called descent-based slavery or “caste-based” slavery — in which slavery is passed down from generation to generation, so that slaves are born into their predicament — is still practiced by some.

In 2013, it was estimated that around 250,000 people were living in slave-like conditions in Mali, where slavery is not illegal. One Malian slave, Raichatou, told the Guardian in 2013 that she became a slave at the age of seven when her mother, also a slave, died. “My father could only watch on helplessly as my mother’s master came to claim me and my brothers,” she said. She worked as a servant for the family without pay for nearly 20 years, and was forced into a marriage with another slave whom she didn’t know, so that she could supply her master with more slaves.

In Mauritania, it is estimated that up to 20% of the population is enslaved, even though slavery was officially outlawed in 1981. The slaves are mostly from the Haratine minority, who are black Africans, as opposed to the nearly half of the population who are Arabs or Berbers. According to a report by the Guardian from 2018:

“Slavery has a long history in this north African desert nation. For centuries, Arabic-speaking Moors raided African villages, resulting in a rigid caste system that still exists to this day, with darker-skinned inhabitants beholden to their lighter-skinned “masters”. Slave status is passed down from mother to child, and anti-slavery activists are regularly tortured and detained. Yet the government routinely denies that slavery exists in Mauritania, instead praising itself for eradicating the practice.”

The report also described a few of the horrific fates of the Haratine slaves:

“Aichetou Mint M’barack was a slave by descent in the Rosso area. Like her sister, she was taken away from her mother and then given to a member of the master’s family to be a servant. She got married in the home of her masters and had eight children, two of whom were taken away from her to be slaves in other families. In 2010, Aichetou’s older sister was able to free her… after she herself fled her masters when they poured hot embers over her baby, killing it.”

BLM and the many corporate executives, university professors, media, sports and cultural personalities who are bending their knees to the movement seem totally unconcerned by the fates of the likes of Aichetou. More likely than not, they have never heard of her or her many fellow sufferers. They are apparently black lives that do not matter — to anyone except the courageous people working in the local anti-slavery organizations.

Instead, BLM and its sycophants endlessly debate changing the names of streets and universities, and removing statues, all of which do not amount to anything more than infantile virtue signaling. They waste time debating whether people who were never themselves slaves, should receive reparations from people who never owned a slave.

To engage in all this posturing, while ignoring the staggering 40 million current victims of actual slavery, not only represents the immeasurable depths of woke hypocrisy, but constitutes an extreme insult to those who are suffering their slavery in silence, while slowly dying from the physical, sexual and emotional abuse that they are being forced to endure. If anything is “offensive,” it is that.