– “…Dollar privilege is why almost half of US households can receive some form of subsidy from the government and still have flat screen TVs, refrigerators, stoves, mobile phones, internet and quite possibly, cars, while the bottom half of the global population lives on less than $2.50/day”

After the 9/11 terror attacks, when our privacies were permanently revoked, and we entered into “a war which would never end in our lifetimes”, Bush II proclaimed “They hate us because of our freedoms”. 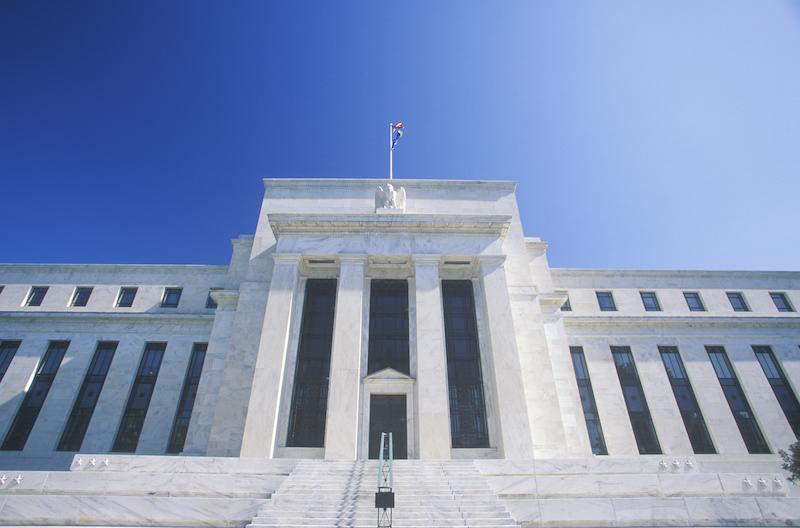 Some critics thought that was an almost nonsensical statement to make, while the credulous took it at face value. It framed whoever perpetrated the attacks as some inhuman “other” that despised happiness itself. It was unthinkable anybody could have an actual foreign-policy derived reason for doing it, and anybody who suggested as much was usually hounded out of the public eye.

However I always thought that utterance did have a kernel of truth to it. If you looked at the United States as a global empire, and that the freedoms “they” hated were not actually the ones to assemble, or worship or to vote, as Bush intimated, but rather the ones where America acted unilaterally in its own interest observing American Exceptionalism as a type of infallible axiom, then Bush would have been closer to the substance of the matter.

Here was world hegemon who claimed the freedom to overthrow governments, the freedom to bomb or invade any country it pleased, the freedom to support brutal dictators, assassinate enemies, interfere in elections and basically do whatever it wanted. Seen in that light, then yes, the 9/11 attackers did hate our “freedoms”.

But from where do those “freedoms” derive? How did the US become so powerful? The recurring theme throughout a lot of my writing has been echoing some criminally obscure writers (such as Stepehen Zarlenga and Vincent LoCascio) who have documented in their works how whoever controls a society’s monetary system, controls the society.

In this era that means that under the current monetary system where the USD is the world’s reserve currency, it’s the USA by and large that controls the global stage.

As long as the USD is the global reserve currency, the USA will enjoy “freedoms” that enable it to impose its own “rules based order” on the entire world

And it is that structure that affords every single American,  a type of systemic, structural, unearned, privilege.

The most divisive privilege going is Dollar Privilege.

Dollar privilege is what enables nearly every single person in America to access a standard of living that for the majority is vastly beyond the means of their own productive or economic capability, and light years beyond what nearly half the world’s population has to maintain itself on.

It’s why zombie companies can borrow money at artificially low interest rates to buy back their own shares trading at all time highs, and why barstool prophets can follow the momo simply by plucking stock tickers out of scrabble bags.

Dollar privilege is why almost half of US households can receive some form of subsidy from the government and still have flat screen TVs, refrigerators, stoves, mobile phones, internet and quite possibly, cars, while the bottom half of the global population lives on less than $2.50/day.

It’s why every single congressman and senator is a millionaire.

It’s why American’s for the most part don’t save. Why should they? When they can borrow money to finance their lifestyles, instead of working, investing and earning in order to fund their lifestyle, and when savings pay zero or negative rates anyway, what’s the point?

Dollar privilege subsidizes Silicon Valley and every money losing unicorn in it and every money losing service each one of those unicorns “provides” on every single money-losing transaction you do with them every day. Dollar privilege is why those same companies can successfully exit via IPO and why legions of Robinhooders can make money trading them.

Dollar privilege is what enables legions of petulant, empty-headed permachilds to run up student debt at over-priced universities to study phantasmagorical non-topics like critical race theory and gender studies.

Dollar privilege is the secret sauce that every Marxist and Democratic Socialist must possess before they can bemoan capitalism from their iPhones and MacBook Pros.

Dollar privilege is what every blue check journalist on Twitter gets paid with from their woke-and-broke media outlets.

All of that is privilege, all of those unearned advantages and perks, that entire, elevated standard of living is derived from being citizens of a country who gets to mint the world reserve currency out of thin air, as much as they want, in ever escalating amounts. 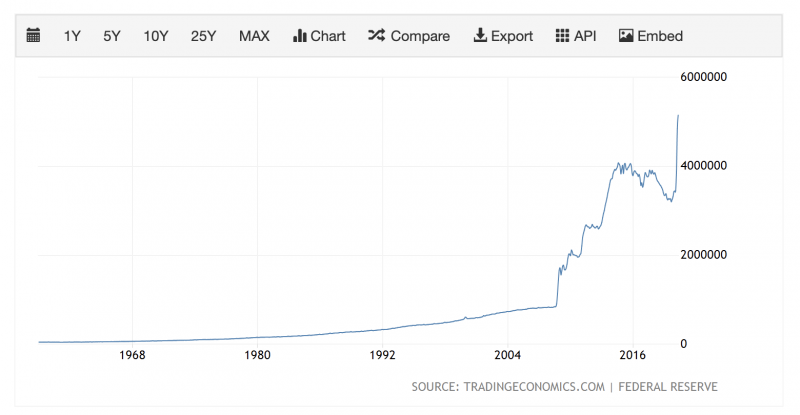 None of this is to deny that there is injustice and vestiges of bigotry and intolerance here in the West. Rather, this is all to point out that what enables us to tear ourselves apart over it from the comparative luxury of digital communications, well stocked refrigerators within modern-day housing is this dollar privilege, the institutional ability to print “value” out of thin air, that the rest of the world then uses to backstop their entire currency systems. 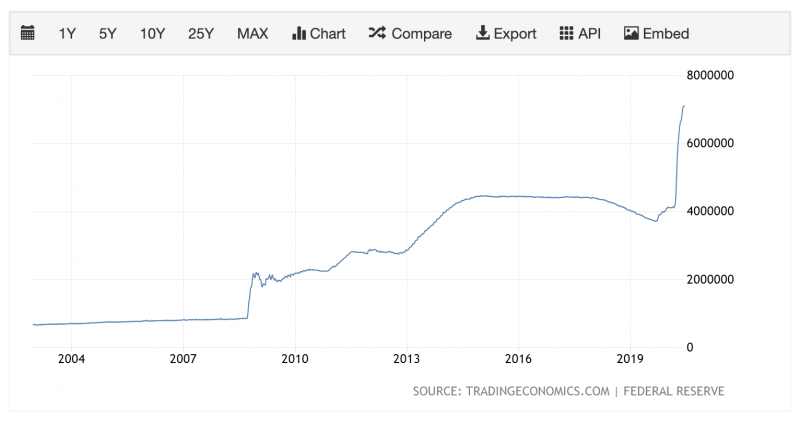 What has changed, why people are more sensitive to the consequences of privilege, is because the periphery of dollar privilege (the “Privilege Perimeter”) used to circumscribe the entire country, and we simply externalized the marginalization it caused overseas. The US military enforced the dollar supremacy globally and the rest of the world essentially traded their wealth and labour for US debt. 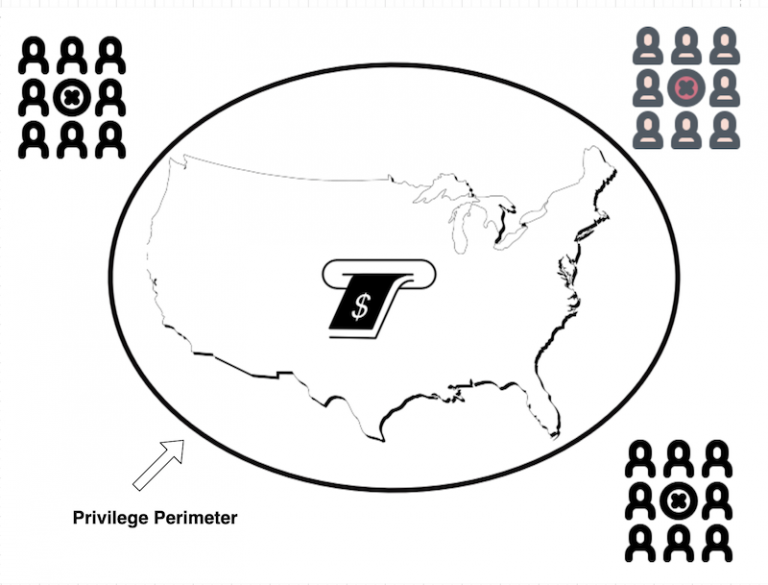 After the end of Bretton Woods, when Nixon closed the gold window (temporarily) in 1972 (it’s still closed), the Privilege Perimeter began an inexorable process of constricting.

It crossed a kind of Rubicon after the Dotcom crash, when the policy choice was to blow up a housing bubble, and then it entered the endgame after the 2008 GFC, when the banksters were bailed out.

None of the bailed-out financiers here at #Davos2016 who live in Greenwich & collect Lamborghinis can understand why US voters are unhappy.

The result is that now, in the USA, the middle class is finding themselves for the first time outside  of the Privilege Perimeter. This is especially acute now that policy makers are literally picking economic winners and losers, with the winners usually being well connected,  albeit often insolvent zombies, and the losers being small businesses, independents, and anybody who works for one.

The Cantillon Effect, which I’ve talked about before, of newly created money benefiting those who are closest to the spigot, turns out to have a reciprocal effect of constricting the circle of beneficiaries over time. It’s like a black hole for economic value. 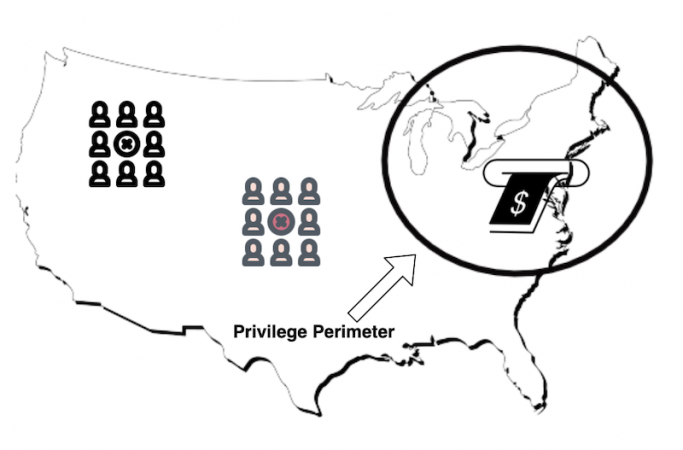 Eventually black holes collapse in on themselves

Once all the economic value has been leeched away from everybody outside the Privilege Perimeter, once all future prospects have been monetized in the here and now, the blackhole of financialization begins to collapse in on itself. It doesn’t feel like a financial crisis as much as it may present as civil unrest, internecine fighting amongst competing factions of elites and external brinksmanship reminiscent of 1914 Europe, shortly before the maps went all “circles and arrows” .

So to all of you who detest privilege and structural inequality, fear not. That era is coming to an end.

But I dare say that most of you don’t recognize the exact nature of the kind of privilege that is ending, and I think once you do understand the epochal change that is underway, you aren’t going to like it.

It means the vast majority of Americans are going to have to endure a massive reduction in their standard of living. At the same time, as long as “The Establishment” holds together, they will continue their breakaway trajectory of opulence, and wealth accumulation, plundering the last of the privilege to go around.