– “…Alasdair Macleod returns to Liberty and Finance / Reluctant Preppers to alert us that his latest research indicates we have recently passed an inflection nexus of numerous critical indicators, signaling a probable systemic failure of the banking system within months, and a collapse of the USD this year”

“The Day Everything Changed” Just Happened 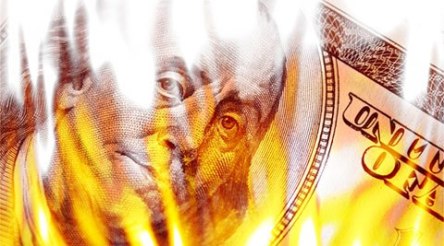 Research indicates we’ve passed an inflection, signaling a probable systemic banking system failure within months, and a collapse of the USD this year…

(Also Read: China Must Prepare To Be Cut Off From Dollar-Based Financial System, Official Warns  @ https://www.zerohedge.com/markets/china-must-prepare-be-cut-dollar-based-financial-system-official-warns)

Alasdair Macleod returns to Liberty and Finance / Reluctant Preppers to alert us that his latest research indicates we have recently passed an inflection nexus of numerous critical indicators, signaling a probable systemic failure of the banking system within months, and a collapse of the USD this year.

Alasdair also answers viewers’ questions about gold & silver, buying land, and protecting ourselves from the global tidal wave of risk sweeping over our live

Robert ‘Rich Dad, Poor Dad’ Kiyosaki: “I Was Told Not To Talk About This” – By Mac Slavo

Robert Kiyosaki has been on the front lines warning people of what’s coming. He continues to speak up, even though he was told to “stay in your lane” and not alert the public to what’s going on right in front of them, with their unknowing consent.

Kiyosaki also says that he doesn’t know what’s coming, but that something bigger is coming our way. As a person speaking out against the ruling class, the elitists, and their system of control and slavery, he could be at the forefront of waking people up. Those still stuck in the left/right paradigm, regardless of the side you choose are going to have to make the worst of choices in the coming future.

Ultimately, Kiyosaki appears to have the same goal as I do right now: waking people up and getting them to leave the Matrix. This is a tough spot to be in because those who still think the ruling class and Donald Trump will save them are going be hurt. The truth is, you are going to have to save yourself, and I agree wholeheartedly with Kiyosaki on that. No government, no false savior (Trump), no bankster, not elitist, no other human is coming to save you. You must wake up, leave the system, and save yourself.

Is this redundant in recent articles? You bet. But far too many are still stuck in a state of hopeful unawareness of what’s really going on all to support a member of the ruling class who has done nothing but advance the elitists’ agenda. And yes, I mean Trump. Look, it was a tough pill for me to swallow too, and I’ll admit it. And if he magically changes sides and is no longer pushing the banking elitists agenda for world domination, I’ll admit I was wrong. But as of right now, unless you are blind or worshipping Trump like he’s some kind of savior, you cannot deny the New World Order has advanced rapidly on his watch.

Kiyosaki suggests using gold, silver, and cryptocurrencies to beat the system. If you don’t like cryptos, don’t buy them. No one is forcing you, but consider at least real money not backed by the corrupt power-hunger bankers that need you to use their money to keep them relevant and in charge.

They have caused a situation in which they will have to “reset” the system in some way or another. This will be the New World Order, one world, completely centralized digital currency. In my humble opinion, if you crave freedom over wealth, do NOT participate in this system.

I still think humans were not meant to be slaves and that I can appeal to some who may have been fooled. At this point, I’m trying to salvage humanity, and so far, I’ve been called all kinds of things for it. But I don’t care if you like me. I care only about your future and the future of those yet unborn. All I can do is attempt to open eyes and ears. The rest is up to you. You are the savior you have been waiting for.

It’s about time we all stand together and abolish the last shred of modern-day slavery [governments]! I will not sit back and allow anyone to continue life as a slave if I can help it! I might not be able to do much, but I can promote peace, liberty, and the abolishment of all forms of slavery.

Some say the pen is mightier than the sword, maybe that’s true, maybe it’s not. But I am tired of being told I have to give up my rights to live free for a false sense of security. I will no longer be owned or commanded. This is MY life and I am peacefully choosing to be free. – Mac Slavo,

“The Day Everything Changed” Just Happened