– “…We need to shift from the assumption that violating planetary boundaries, ecosystem boundaries, species boundaries, and human rights is a measure of progress and superiority—to creating economies based on respecting ecological laws and ecological limits, and respecting the rights of the last person, the last child”

The Path Beyond Extinction and Escape: Return to Earth, Regenerate and Share – By Vandana Shiva 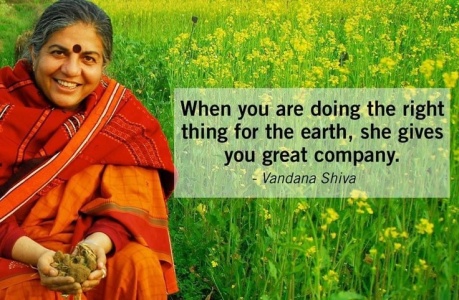 The game billionaires play is not worthy of being called economy, either as care for the home, or as the art of living. It is exractive, naked money making, at war with life and creativity. (Photo: Drew Angerer/Getty Images)

On 31st May, while people were dying during the Corona Pandemic, while millions had lost their livelihoods and were going hungry during the “lockdown,” while millions were marching in city after city in the USA to protest against police brutality and police violence after the killing of George Floyd by the police in Minneapolis, billionaire Elon Musk launched Space X.

For me this was a brutal display of the hubris, indifference and power of the 1% who have pushed ecosystems, communities, countries and humanity to the brink.

Musk wants to create a “self sustaining” Space X city on Mars over the next century for a privileged faction of humanity. He ignores the fact that there is no Planet B, that the Earth is our only living planet, she is Gaia, she is alive.

Musk talked about being emotional during the launch of Space X. Powerful men have “emotions” for their machines, not for people or other beings. They talk of humans becoming a “space bearing civilization and a multi-planetary species.” They are still in denial that we are all earthlings who share life with other beings on the earth, our common home.

The billionaires who have violated Planetary boundaries and contributed to the destruction of the earth and injustice and inequality in society, seem to want to “escape” from their humanity and the threat of extinction they helped create.

With the money Musk is pouring into Space X, millions would be fed and engaged creatively in regenerating the Earth, our common home, making it livable for present and future generations, everywhere.

As members of the earth community they have the responsibility to care for the earth, not exploit her and when the damage is done, decide to abandon her to colonise other planets.

With the money Musk is pouring into Space X, millions would be fed and engaged creatively in regenerating the Earth, our common home, making it livable for present and future generations, everywhere.

The sixth mass extinction is a manmade phenomenon: It is driven by the limitless greed of the few.

Take just one example, even when it is painted “green”—the limitless appetite of Musk’s electric car industry for Lithium has led to the expansion of lithium mines in Northern Tibet , Southern America and Chile, and Bolivia. With the demand for electric cars, the demand for lithium is expected to more than double by 2025 with exponential damage to the environment and surrounding communities.

According to Evo Morales, the former President of Bolivia, the coup against him was a lithium coup. The coup came a week after Morales nationalised lithium on 4 November 2019, saying it belongs to the Bolivian people, not to multinationals, and cancelled the December 2018 agreement with Germany’s ACI Systems Alemania (ACISA) following weeks of protests from residents of the Potosí area which has 50% to 70% of the world’s lithium reserves in the Salar de Uyuni salt flats. ACISA provides batteries to Tesla owned by Leon Musk and the coup resulted in a massive rise in the company’s stock.

When the rich and powerful destroyed the binding Climate Change treaty in Copenhagen in 2009, Evo Morales addressed the Conference of Parties, reminding everyone that governments were supposed to be negotiating ways to protect Mother Earth, not the rights of polluters. As a countermeasure, he announced he would call a people’s Summit on Climate Change and the Rights of Mother Earth. I was honoured to work with the group created by the Government of Bolivia to prepare a draft Universal Declaration on the Rights of Mother Earth.

As Earth Citizens we have a choice—to either follow the market’s laws of greed and unlimited profit or the laws of the Earth.
As we make shifts to a post Covid economy, we need to take into account the full ecological, social, and political costs of what is being offered and what choices we make. Rendering invisible the real costs to the earth and people is how the mega corporate world accumulates its wealth, polarizing society further, denying millions their fundamental rights, undermining democracy, and increasing their ecological footprint, leaving these costs to be born by the earth and vulnerable communities.

As always, colonisers leave the places and spaces they have destroyed and polluted, and find new colonies to occupy and extract from, touting them as the next step of progress, as solutions to the ecological and poverty crises they have contributed to, finding other places and other people to dominate and plunder.

Cecil Rhodes who colonized Zimbabwe (formerly Rhodesia) stated frankly “We must find new lands from which we can easily obtain raw materials and at the same time exploit the cheap slave labour that is available from the natives of the colonies. The colonies would also provide a dumping ground for the surplus goods produced in our factories.”

This is still the model of the economy of the 1%. The tools of extraction, and the colonies might change but the patterns of colonization remain unchanged—grab and steal what belongs to others, make it your own property, collect rents from the original owners, transform the displaced into cheap slave labour to provide cheap raw materials, and turn them into consumers for your industrial products.

For Elon Musk, the colonies are both other planets like Mars and countries rich in lithium. For Bill Gates and Big Tech, the new colonies are our bodies and minds—as spelled out in WIPO’s patent no. WO2020/06060 which the billionaire has just been granted at the peak of the Corona virus and in the midst of lockdown at the end of March. This Is the next step in the tech giants’ plan for the digitalization of the world where people and their work are being rendered “useless” and are being reduced to “users” of the “machines.”

A digital dictatorship based on the premise that 90% of humanity is disposable has no obligation to social justice and human rights. A digital dictatorship is not a life generating and livelihood supporting economy. It can work through extraction of data from our minds and bodies for a few years as “surveillance capitalism”, but because it does not create the generative conditions that support life in nature’s economy and the sustenance economy of people, because it does not nourish our health, our bodies and minds, or our creativity, our freedom or our earth being—it will destroy the ecological and social base of the economy and our future as a species.

We need to shift from the assumption that violating planetary boundaries, ecosystem boundaries, species boundaries, and human rights is a measure of progress and superiority—to creating economies based on respecting ecological laws and ecological limits, and respecting the rights of the last person, the last child.

We need to shift from seeing money and technology as masters in a new religion of money making, “chrematistics,” to recognizing they are mere means that must be governed and regulated democratically for higher ecological and human ends.

Humanity must opt for staying alive by caring for our common home, the Earth and each other, rejuvenating the Planet, and through it sowing the seeds of our common future.

“Only as one earth community and one humanity, united in our diversities, can we hold ourselves together and step away from the precipice, and escape the destructive, ecocidal, genocidal rule of the 1% and the hallucinations of the mechanical mind. The 1% have brought us to this point, like sheep to slaughter. But we can turn around and walk away, to our freedom. To live free. To think free. To breathe free. To eat free. Seeding the Future is in our minds, our hearts, our hands.”

Dr. Vandana Shiva is a philosopher, environmental activist and eco feminist. She is the founder/director of Navdanya Research Foundation for Science, Technology, and Ecology. She is author of numerous books including, Soil Not Oil: Environmental Justice in an Age of Climate Crisis; Stolen Harvest: The Hijacking of the Global Food Supply; Earth Democracy: Justice, Sustainability, and Peace; and Staying Alive: Women, Ecology, and Development. Shiva has also served as an adviser to governments in India and abroad as well as NGOs, including the International Forum on Globalization, the Women’s Environment and Development Organization and the Third World Network. She has received numerous awards, including 1993 Right Livelihood Award (Alternative Nobel Prize) and the 2010 Sydney Peace Prize.