– “…The real looters – the ruling class – are comfortably surveying the show on their massive 4K Bravias, sipping single malt. This is a class war much more than a race war and should be approached as such. Yet it was hijacked from the start to unfold as a mere color revolution”

Why America’s Revolution Won’t Be Televised – By Peper Escobar

The Revolution Won’t Be Televised because this is not a revolution. At least not yet. 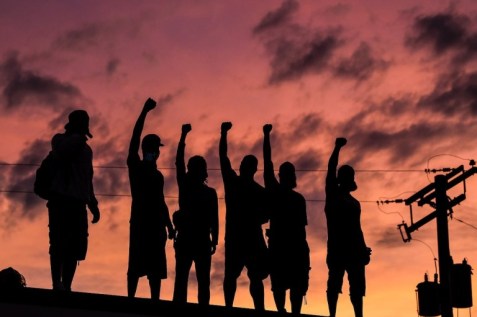 Burning and/or looting Target or Macy’s is a minor diversion. No one is aiming at the Pentagon (or even the shops at the Pentagon Mall). The FBI. The NY Federal Reserve. The Treasury Department. The CIA in Langley. Wall Street houses.

The real looters – the ruling class – are comfortably surveying the show on their massive 4K Bravias, sipping single malt.

This is a class war much more than a race war and should be approached as such. Yet it was hijacked from the start to unfold as a mere color revolution.

US corporate media dropped their breathless Planet Lockdown coverage like a ton of – pre-arranged? – bricks to breathlessly cover en masse the new American “revolution.” Social distancing is not exactly conducive to a revolutionary spirit.

There’s no question the US is mired in a convoluted civil war in progress, as serious as what happened after the assassination of Dr Martin Luther King in Memphis in April 1968.

Yet massive cognitive dissonance is the norm across the full “strategy of tension” spectrum. Powerful factions pull no punches to control the narrative. No one is able to fully identify all the shadowplay intricacies and inconsistencies.

To quote the Temptations: it’s a ball of confusion.

Antifa is criminalized but the Boogaloo Bois get a pass (here is how Antifa’s main conceptualizer defends his ideas). Yet another tribal war, yet another – now domestic – color revolution under the sign of divide and rule, pitting Antifa anti-fascists vs. fascist white supremacists.

Meanwhile, the policy infrastructure necessary for enacting martial law has evolved as a bipartisan project.

Protesters jump on a street sign near a burning barricade near the White House during a demonstration against the death of George Floyd on May 31, 2020 in Washington, DC. Photo: AFP

We are in the middle of the proverbial, total fog of war. Those defending the US Army crushing “insurrectionists” in the streets advocate at the same time a swift ending to the American empire.

Amidst so much sound and fury signifying perplexity and paralysis, we may be reaching a supreme moment of historical irony, where US homeland (in)security is being boomerang-hit not only by one of the key artifacts of its own Deep State making – a color revolution – but by combined elements of a perfect blowback trifecta:Operation Phoenix; Operation Jakarta; and Operation Gladio.

But the targets this time won’t be millions across the Global South. They will be American citizens.

Quite a few progressives contend this is a spontaneous mass uprising against police repression and system oppression – and that would necessarily lead to a revolution, like the February 1917 revolution in Russia sprouting out of the scarcity of bread in Petrograd.

So the protests against endemic police brutality would be a prelude to a Levitate the Pentagon remix – with the interregnum soon entailing a possible face-off with the US military in the streets.

But we got a problem. The insurrection, so far purely emotional, has yielded no political structure and no credible leader to articulate myriad, complex grievances. As it stands, it amounts to an inchoate insurrection, under the sign of impoverishment and perpetual debt.

Adding to the perplexity, Americans are now confronted with what it feels like to be in Vietnam, El Salvador, the Pakistani tribal areas or Sadr City in Baghdad.

Iraq came to Washington DC in full regalia, with Pentagon Blackhawks doing “show of force” passes over protestors, the tried and tested dispersal technique applied in countless counter-insurgency ops across the Global South.

And then, the Elvis moment: General Mark Milley, chairman of the Joint Chiefs of Staff, patrolling the streets of DC. The Raytheon lobbyist now heading the Pentagon, Mark Esper, called it “dominating the battlespace.”

Well, after they got their butts kicked in Afghanistan and Iraq, and indirectly in Syria, full spectrum dominance must dominate somewhere. So why not back home? 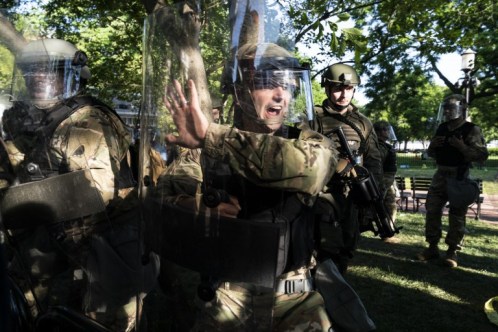 Troops from the 82nd Airborne Division, the 10th Mountain Division and the 1stInfantry Division – who lost wars in Vietnam, Afghanistan, Iraq and, yes, Somalia – have been deployed to Andrews Airbase near Washington.

Super-hawk Tom Cotton even called, in a tweet, for the 82nd Airborne to do “whatever it takes to restore order. No quarter for insurrectionists, anarchists, rioters and looters.” These are certainly more amenable targets than the Russian, Chinese and Iranian militaries.

Milley’s performance reminds me of John McCain walking around in Baghdad in 2007, macho man-style, no helmet, to prove everything was OK. Of course: he had a small army weaponized to the teeth watching his back.

And complementing the racism angle, it’s never enough to remember that both a white president and a black president signed off on drone attacks on wedding parties in the Pakistani tribal areas.

Esper spelled it out: an occupying army may soon be “dominating the battlespace” in the nation’s capital, and possibly elsewhere.

What next? A Coalition Provisional Authority?

Compared to similar ops across the Global South, this will not only prevent regime change but also produce the desired effect for the ruling oligarchy: a neo-fascist turning of the screws. Proving once again that when you don’t have a Martin Luther King or a Malcolm X to fight the power, then power crushes you whatever you do.

The late, great political theorist Sheldon Wolin had already nailed it in a book first published in 2008: this is all about Inverted Totalitarianism.

Wolin showed how “the cruder forms of control – from militarized police to wholesale surveillance, as well as police serving as judge, jury and executioner, now a reality for the underclass – will become a reality for all of us should we begin to resist the continued funneling of power and wealth upward.

Sinclair Lewis (who did not say that, “when fascism comes to America, it will come wrapped in the flag and waving the cross”) actually wrote, in It Can’t Happen Here (1935), that American fascists would be those “who disowned the word ‘fascism’ and preached enslavement to capitalism under the style of constitutional and traditional native American liberty.”

So American fascism, when it happens, will walk and talk American.

George Floyd was the spark. In a Freudian twist, the return of the repressed came out swinging, laying bare multiple wounds: how the US political economy shattered the working classes; failed miserably on Covid-19; failed to provide affordable healthcare; profits a plutocracy; and thrives on a racialized labor market, a militarized police, multi-trillion-dollar imperial wars and serial bailouts of the too big to fail.

Instinctively at least, although in an inchoate manner, millions of Americans clearly see how, since Reaganism, the whole game is about an oligarchy/plutocracy weaponizing white supremacism for political power goals, with the extra bonus of a steady, massive, upwards transfer of wealth. 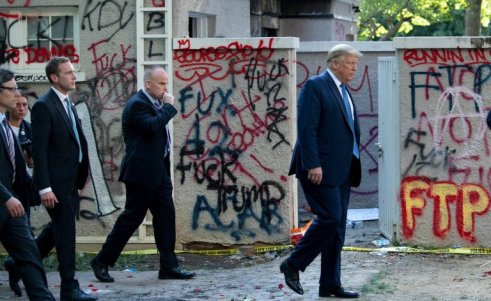 US President Donald Trump walks back to the White House escorted by the Secret Service after appearing outside of St John’s Episcopal church across Lafayette Park in Washington, DC, June 1, 2020. Photo: AFP/ Brendan Smialowski

Slightly before the first, peaceful Minneapolis protests, I argued that the realpolitik perspectives post-lockdown were grim, privileging both restored neoliberalism – already in effect – and hybrid neofascism.

President Trump’s by now iconic Bible photo op in front of St John’s church – including a citizen tear-gassing preview – took it to a whole new level. Trump wanted to send a carefully choreographed signal to his evangelical base. Mission accomplished.

But arguably the most important (invisible) signal was the fourth man in one of the photos.

Giorgio Agamben has already proved beyond reasonable doubt that the state of siege is now totally normalized in the West. Attorney General William Barr now is aiming to institutionalize it in the US: he’s the man with the leeway to go all out for a permanent state of emergency, a Patriot Act on steroids, complete with “show of force” Blackhawk support.

Why America’s revolution won’t be televised