– “…Residents in Nogales, Sonora, told AP, they constructed roadblocks to prevent people from Arizona heading into Mexico back in March because Mexican government officials were doing very little to screen people coming from the US”

SM:...First of all, they smell funny and carry diseases – payback is a bitch – Viva Mexico! – keep them ‘White Devil’s’ at bay….

Mexicans Are ‘Building A Wall’ To Keep American-COVID-Carriers Out

Government officials, healthcare workers, and residents in Mexican border cities are alleging new COVID-19 outbreaks are connected with infected people crossing the border from the US. 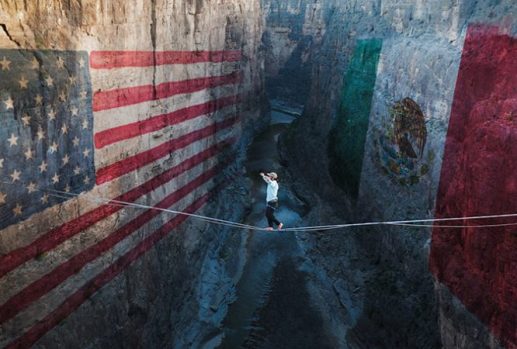 Municipal and state officials in Matamoros, located on the southern region of the Rio Grande, directly across the border from Brownsville, Texas, in conjunction with Mexico’s National Guard established checkpoints over the weekend at three border crossings to screen US citizens, dual nationals, and locals, a move to mitigate the spread of the virus in the country.

City official Jorge Mora Solaldine, told AP News only one person per car is permitted across the border, and they will have to prove essential business, such as work or medical care is being done, or risk rejection.

At least 180 people were denied access at one border crossing into Mexico along the Brownsville stretch on Saturday. The municipality of Matamoros and other border towns in the area have reported an increase in COVID-19 cases.

Along the San Diego–Tijuana border, Tijuana doctors told AP that a spike in cases is coming from dual nationals, residents, and some Americans who have crossed over:

“There were a lot of people who emigrated here to Mexico,” Dr. Remedios Lozada, who leads government efforts in the Tijuana health district. “That was when we began facing a higher number of cases.”

Residents in Nogales, Sonora, told AP, they constructed roadblocks to prevent people from Arizona heading into Mexico back in March because Mexican government officials were doing very little to screen people coming from the US.

President Trump has routinely praised his border wall and claimed it had stopped the virus:

“We’ll have 500 miles [of the Southern border fence] built by very early next year, some time, so, one of the reasons the numbers are so good. We will do everything in our power to keep the infection and those carrying the infection from entering our country. We have no choice. Whether it’s the virus that we’re talking about or many other public health threats. The Democrat policy of open borders is a direct threat to the health and well-being of all Americans. Now you see it with the coronavirus, you see it,” President Trump said at a campaign rally in Charleston, South Carolina, in late February.

Though Mexican state governors along the border said thousands of new cases developed in late March, days after President Trump closed businesses and issued public health orders for all residents to stay-at-home in the US.

Last month, Baja California Governor Jaime Bonilla said doctors were “dropping like flies” due to the lack of proper medical gear as cases begin to rise.

Recently, the Trump administration extended strict border policies to limit inbound and outbound flow, citing the spread of the virus.

All non-commercial, “non-essential” has been blocked for the time being.

Jose Maria Ramos, a professor and researcher at the College of the Northern Border in Tijuana, said President Trump’s priority appears to be limiting migration flow rather than protecting public health.

“We’re in a national emergency, and health has to be part of the present and immediate future,” Ramos said.

Miguel Angel Jimenez, a 57-year-old diabetic who was infected with COVID-19 in April and is now recovering, said inbound and outbound flows at border crossings ‘will never make this situation end.’

Several weeks back, we noted how Mexico was likely distorting virus statistics and repressing negative data, which is all suggestive that Mexican President Andres Manuel Lopez Obrador (AMLO) is trying to reopen his crashed economy, despite an ongoing pandemic.

AMLO recently said the reopening would be “cautious and gradual,” but with more than 68,500 confirmed cases and nearly 7,400 deaths, the concern is the federal government is severely underreporting the public health crisis and prematurely reopening the economy.

AP’s coverage on Mexico City’s COVID-19 death toll and cremating bodies has been an eye-opener for anyone seeking a glimpse of the deteriorating virus crisis in the country.

While people along Mexican border cities fear the virus is coming from the US — the examples of stricter border measures via Mexican government and residents resorting to creating walls of their own to thwart inbound traffic from the US — are all suggestive that cross-border trade between both countries will remain severely depressed for 2020.

One thought on “LA DIVINA COMEDIA HUMANA: Mexicans Are ‘Building A Wall’ To Keep Americans Out”