– “…Two blueprints for the 1999, 2000 construction upgrades to WTC 2, provided by a supporter, indicated that the work was done at almost exactly the point of impact and failure in that tower. That is, the southeast quadrant of WTC 2 was the focus of the work, at least on the 78th floor (the blueprints provided were for floors 77 and 78 only). It was the southeast quadrant of WTC 2, at and just above floor 78, where flight 175 hit”

Another amazing coincidence related to the WTC

There appears to be a remarkable correlation between the floors upgraded for fireproofing in the WTC towers, in the years preceding 9/11/01, and the floors of impact, fire and failure. The fireproofing upgrades would have allowed for shutdown of the affected floors, and the exposure of the floor assemblies and the columns for a significant period of time. Exactly what work was done during that time?
In some sections of the NIST WTC report, the exact floors upgraded are listed. Other sections of the report suggest even more floors were upgraded, a total of 18 floors in WTC 1 and 13 floors in WTC 2, but the additional floors involved are not specified.[1]

WTC tower floors upgraded for fireproofing and floors of impact, fires and failure on 9/11 (click for full size) 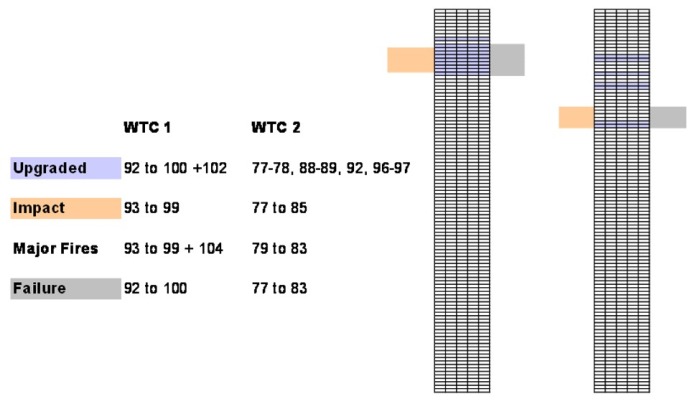 This relationship is unmistakable for WTC 1. Some investigators have pointed out that a number of floors failed simultaneously in this tower, in accordion-like fashion, before the rest of the building began to ‘collapse’. These floors seem to match up almost exactly with the floors that were upgraded. See the film clip below, and the following Powerpoint sequence created by Gregory Urich.

Two blueprints for the 1999, 2000 construction upgrades to WTC 2, provided by a supporter, indicated that the work was done at almost exactly the point of impact and failure in that tower. That is, the southeast quadrant of WTC 2 was the focus of the work, at least on the 78th floor (the blueprints provided were for floors 77 and 78 only). It was the southeast quadrant of WTC 2, at and just above floor 78, where flight 175 hit.
We have also seen video of molten metal pouring from WTC 2 prior to its destruction. The relationship between fireproofing upgrades and the pouring metal is close but not exact, as the molten metal seen in videos appears to be coming from floors 80 and 81. Communication to the NIST team from Frank Lombardi of the Port Authority, in 2002, indicated that only floor 78 of the impact failure floors of WTC 2 had been upgraded. But NCSTAR 1-6A (table 4-2, p 45) lists floor 85 as an upgraded floor as well. Could it be that certain areas within floors 79 to 84 were upgraded also, and not reported because the floors were not fully upgraded?
For the north tower at least, it is difficult to accept that this relationship is yet another unbelievable coincidence related to 9/11. Certainly the upgrade work allowed for access to critical areas. But in considering this, a number of other, admittedly far-fetched questions come to mind. Why was the upgraded fireproofing measured to be twice the thickness specified?[2] Could incendiary or explosive materials have been embedded within the upgraded fireproofing? Could these “construction” activities have involved installing mechanisms to direct the planes to the specific areas in which they hit each building?
In any case, the demolition hypothesis should be considered more than just simple demolition. If the idea was to create the appearance of a fire-induced collapse, then a fiery presentation was needed, much more than the jet fuel/office furnishings would have been able to provide. It seems that thermate may have been used not only to weaken or cut the steel infrastructure throughout the buildings, but also to help create that fiery presentation near the floors of impact.
It seems possible that a thermate-like material, and/or other devices contributing to the destruction of the towers, could have been incorporated on the floors of impact and failure during the fireproofing upgrades. The access for such an operation would have been facilitated by the activity surrounding the fireproofing upgrades.
[1] NCSTAR 1-6A, page xxxvii, indicates which exact floors were upgraded. NCSTAR 1-6, page 20 repeats these claims, as noted in the figure above. Elsewhere in NCSTAR 1-6, on page lxxi, NIST muddies the water by saying “18 floors in WTC 1, including all the floors affected by the aircraft impact and fires” and “”13 floors in WTC 2, although none were directly affected by the aircraft impact and fires.”. On this last part, NIST contradicts itself yet again in NCSTAR 1-6 (on page lxvii-lxix) by stating that some of the floors upgraded in WTC 2 were affected by the impacts and fires (notably floor 78). As with the contradictory amounts of jet fuel referenced throughout NIST’s report, these fireproofing upgrade statements appear to be another example of how detailed findings in the NIST team’s lower level reports were confused or made vague in higher-level reports.
[2] NCSTAR 1-6A (p xl) states “The overall average thickness determined from the 356 individual measurements was found to be 2.5 in, with a standard deviation of 0.6 in.” The same report (p 44) says “Note that some of the average thicknesses shown in Table 4-2 equal or exceed 3.5 in. No photos were available of upgraded floors to show the appearance of such high average thickness of SFRM.” Floor 94 of WTC 1 stands out in this data, with a SFRM thickness of more than 4 in. The specification for these upgrades was only 1.5 in, increased from the as-built specification of 0.75 in.