– ‘…All of that data – the entire alleged record of the Moon landings – was on the 13,000+ reels that are said to be “missing.”…But it’s not just the reels that are missing. Most of the moon rocks collected during the Apollo missions have vanished as well…Red flags are not only unfurling around lost rocks and lost data reels. NASA astronaut Don Pettit said he would “go to the Moon in a nanosecond. The problem is we don’t have the technology to do that anymore. We used to, but we destroyed that technology”

SM: …It’s all understandable & simple to explain – you place a multi-billion dollar historical record between your Dumb & Dumber #1 & Too DVD & bingo!, gone in a flash – no doubt to its final resting place of lost socks & irreplaceable humanitarian scientific milestones…

No man has a good enough memory to be a successful liar.’ –– Abraham Lincoln

In 2013, China set an unmanned rover on the moon. It was equipped with an alpha-particle X-ray spectrometer that was used to analyze moon rocks and soil, and the data was transmitted back to Earth. The rover operated for three months and explored an area of about 3 square kilometers, or a maximum range of six miles from the landing site.
The data was comprised of chemical composition analysis of rock material elements. Most curiously, this data differed dramatically from the samples collected during the Apollo missions. The location on the moon of the Apollo landings are shown as numbers in the photo below, and Chinese rover’s site is marked with an arrow.

Although Apollo sites span a wide area of the Moon, the alleged chemical results were relatively similar. However, the Chinese samples are VASTLY different- Correlated compositional and mineralogical investigations at the Chang′e-3 landing site. The report states,”These compositional features suggest that the CE-3 soils differ significantly from other known lunar basaltic materials.”
Jarrah White calculates these elements as described in the video below starting at 21:36.
Are we even talking about the same Moon?

The late Dave McGowan added some pertinent color on the topic of the moon rocks gathered during the Apollo missions. For starters, the transmission data NASA used to base its reports is “missing.”
As Reuters reported (per McGowan) on Aug. 15, 2006:
The U.S. government has misplaced the original recording of the first moon landing, including astronaut Neil Armstrong’s famous “one small step for man, one giant leap for mankind” …
Armstrong’s famous moonwalk, seen by millions of viewers on July 20, 1969, is among transmissions that NASA has failed to turn up in a year of searching, spokesman Grey Hautaluoma said.
“We haven’t seen them for quite a while. We’ve been looking for over a year, and they haven’t turned up,” Hautaluoma said …
In all, some 700 boxes of transmissions from the Apollo lunar missions are missing.
The fact that the tapes are missing (and according to NASA, now have been for over four decades), amazingly enough, was not even the most compelling information that the Reuters article provided. There was also an explanation of how the alleged Moonwalk tapes that we all know and love were created:
“Because NASA’s equipment was not compatible with TV technology of the day, the original transmissions had to be displayed on a monitor and re-shot by a TV camera for broadcast.”
So what we saw then, and what we have seen in all the footage ever released by NASA since then, were not in fact live transmissions. To the contrary, it was footage shot off a television monitor, and a tiny black-and-white monitor at that. That monitor may have been running live footage, I suppose, but it seems far more likely that it was running taped footage.
NASA, of course, has never explained why — even if it were true — that the original broadcasts had to be “re-shot” given that they never subsequently released any of the actual “live” footage.
It isn’t just the video footage that’s missing. Also allegedly beamed back from the Moon was voice data, biomedical monitoring data and telemetry data to monitor the location and mechanical functioning of the spaceship. All of that data — the entire alleged record of the Moon landings — was on the 13,000+ reels that are said to be “missing.”
Update: On Jan 1, 2016 shortly after McGowan’s death and 45 years after the “landings”, voila- NASA claimed to have turned up and published telemetry data from Apollo 15.
Therefore, there is no way for the modern scientific community to determine whether all of that fancy 1960s technology was even close to being functional or whether it was all for show. Nor is there any way to review the physical record, so to speak, of the alleged flights.
Incredibly, another Reuters tall tale dated July 21, 2009 asks us to believe that a batch of 200,000 tapes were degaussed (magnetically erased) and re-used to save money.

For example, the radiation exposure data the Apollo mission recorded in the Van Allen belt was put into a NASA document in 1973. However, the monitoring data utilized to write the report is missing. This is astonishing and no minor footnote.
But it’s not just the reels that are missing. Most of the moon rocks collected during the Apollo missions have vanished as well.
The Associated Press reported on Sept. 13, 2009:
Nearly 270 rocks scooped up by U.S. astronauts were given to foreign countries by the Nixon administration …
Of 135 rocks from the Apollo 17 mission given away to nations or their leaders, only about 25 have been located by CollectSpace.com, a Web site for space history buffs that has long attempted to compile a list.
The outlook for tracking the estimated 134 Apollo 11 rocks is even bleaker. The locations of fewer than a dozen are known. It appears then that having a “control rock” wouldn’t really be of much help after all, since nearly 90% of the alleged Moon rocks that we would want to test don’t seem to be around any more. 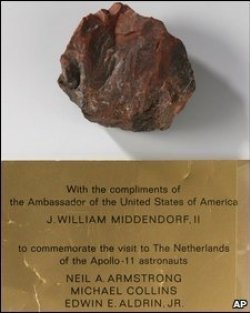 And then there’s the case of the Moon rock that the Dutch national museum carefully safeguarded for many years before discovering, in August 2009, that they were actually in possession of the most over-insured piece of petrified wood on the planet.
The “Moon rock” had been a gift to the Dutch from the U.S. State Department, and its authenticity had reportedly been verified through a phone call to NASA. I’m guessing that NASA was probably running low on meteorite fragments and figured the Dutch wouldn’t know the difference anyway. Or maybe Washington was a little peeved over the fact that Dutch newspapers reportedly called NASA’s bluff at the time of the first alleged Moon landing.

McGowan theorizes that what little Moon rock was actually put forth was of terrestrial origin, meaning it arrived on Earth of its own accord. Yep, as it turns out there are authentic Moon rocks available right here on Earth in the form of lunar meteorites. The Moon lacks a protective atmosphere, you see, so it gets smacked around quite a bit, which is why it’s heavily cratered. And when things smash into it to form those craters, lots of bits and pieces of the Moon fly off into space. Some of them end up right here on Earth.
By far the best place to find Moon rocks is Antarctica, where they are most plentiful and, due to the terrain, relatively easy to find and well preserved. And that is why it’s curious that Antarctica just happens to be where a team of Apollo scientists led by Wernher von Braun ventured off to in the summer of 1967, two years before Apollo 11 blasted off.
Perhaps this explains why U.S. Moon material data and Chinese Moon material data are dramatically different. Perhaps the U.S. tried to pass off Moon rocks from Antarctica as Moon rocks collected by Apollo. Such rocks would be from a different time and would have separated from lunar surface geological processes.

Red flags are not only unfurling around lost rocks and lost data reels. NASA astronaut Don Pettit said he would “go to the Moon in a nanosecond. The problem is we don’t have the technology to do that anymore. We used to, but we destroyed that technology.”
Damn it, Janet, happened again- we kept telling the night janitors to leave those cabinets alone!