The dark arts of espionage share more in common with historically-rooted secret societies than the media would care to admit. Using decades of experience and observation, KGB First Chief Directorate Col. Stanislav Lekarev (1935-2010) takes us into the murky netherworld of globalist powerplayers, occult orders, and state intelligence services.

In the “Masonic-intelligence” complex, it’s difficult to say who’s more central – who’s the real “leader,” and who’s being “led.” This has taken shape in various ways. It’s well-known that through its men in the Masonic lodges, the CIA is able to channel the work of the international business community into directions needed by the United States. But Masons who work in the CIA are also capable of setting the tone they require.

In any case, Masonic techniques have been adopted in the CIA, MI6, the BND, and Mossad. With all conditions equal, during officer selection preference is given to Freemasons. Masonic lodges serve not only as a personnel reservoir, but as their own type of guarantor of a given officer’s reliability. In contemporary conditions, the setting out of agents of influence and the use of blackmail; bribery; intimidation; and defamation of one’s enemies have entered soundly into the arsenal of these kindred organizations.

Consequently, the leaderships of the Masonic lodges and NATO intelligence services were spliced together.

A classic example of this is the founder of the CIA, Allen Dulles. Having become the director of the CIA, he would remain a Mason until the end of his life.

Medals awarded to all prominent leading officers of the CIA, beginning with its founder William Donovan, who in 1945 received a Grand Maltese Cross of the Order of St. Sylvester from the hands of Pope Pius XII in 1945, bear witness to the successes in joint actions between the CIA and Freemasonry.

In the fall of 1948, the “Knights of the Church” presented the highest award of the Maltese Order – the Great Cross – to General Reinhard Gehlen, the chief of West German intelligence, for his services. At that time the BND was merely a branch of US intelligence. In recent years, judging by their obituaries, all Cold War era CIA directors and their deputies were Knights of Malta.

In many cases US intelligence services consider Masons a reliable mainstay in their secret work. Establishing contacts with the necessary individuals is carried out along “fraternal” lines. 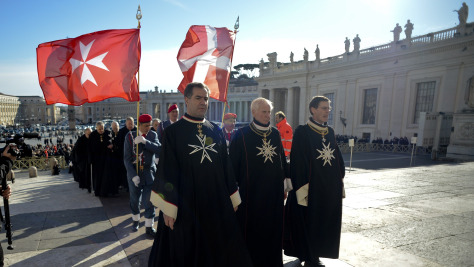 To direct the branches of a secret society scattered across many continents and countries, a special center for assuring cooperation and coordination is needed. The CIA has such a center. It’s situated in the homeland of the Knights of St. John of Jerusalem – Valletta. In the best traditions of intelligence services and Masonic lodges, its activities are not publicized.

During 1987 and 1988 in Paris, Masons from the CIA created the Commonwealth of Russian Masons, uniting around 100 Freemasons. Along with that, Radio Liberty regularly transmitted exhortations to citizens of the USSR to join Masonic lodges.
One of the main support points for acquiring agents of influence was the “Alexander Pushkin” lodge. Later it was namely this lodge, and the Pushkin Association that arose on its foundation, that would become initiators for creating the lodges “Novikov” (Moscow), “Geometry” (Kharkov), and also “Sphinx” (St. Petersburg) in the post-Soviet space. Relying on the solid financial support of the CIA, the Scottish-Rite Freemasons also stretched their tentacles into the provinces. Today we know of the existence of Scottish Rite lodges in Nizhniy Novgorod, Voronezh, Kursk, Orel, Novosibirsk, Vladivostok, Kaliningrad, Rostov-on-Don, and even in Novocherkassk. From 1992 to 1996, several similar lodges formed in the Army and Internal Forces (two are documented). They are composed mainly of the middle and upper officer corps. According to some information, from the middle of the 1990s a Masonic lodge closely tied to the Pushkin Association is functioning, and it’s allegedly made up of only officers of the Ministry of Defense and General Staff.

Zbigniew Brzezinski, Trilateral founding member and midwife to the Afghan Mujahideen , the basis for Al-Qaeda.

In 1973 the CIA created an international organization, the Trilateral Commission, as cover for operations to recruit agents of influence. It united representatives of the capitalist powers from politics, science, and business, who were engaged in seeking ways to consolidate Western power.

We know that in December of 1989, on the home island of the Knights of Malta, a meeting between Mikhail Gorbachev and George H.W. Bush took place. There the presidents officially declared the end of the Cold War. Problems relating to disarmament, regional conflicts, and also economic relations were discussed at the meeting. Gorbachev was elected a member of the Trilateral Commission, which was engaged in global issues of relations between Europe, America, and Japan. Soon the USSR was no more…

Was Yeltsin a Mason?

It’s known that in November of 1991, Boris Yeltsin was accorded the rank of a Knight of Malta. At the Kremlin he was awarded the cross of a Knight-Commander of the Maltese Order. From times long ago, the Maltese Order has been known as a supporting structure of the international Masonic organization. More than a few of its secrets are tied to the mystery of the murder of Russian Emperor Paul I, who had received in his time the same regalia awarded to the first president of Russia. After the initiation ritual, Yeltsin posed in full knightly attire for press photographers.

A year later he signed Order No. 827 “On the Restoration of Official Relations Between the Russian Federation and the Maltese Order.” The Russian Foreign Ministry charged its emissary at the Vatican to represent Russia’s interests to the Knights of Malta. 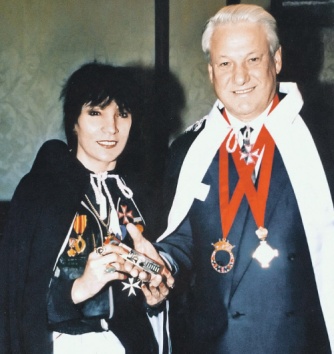 Looking as dignified as ever: Boris Yeltsin, Knight of Malta?

And nonetheless, arguments for Yeltsin’s membership in Freemasonry only amount to photographs in which the first president of Russia is depicted sporting the attributes of the Maltese Order. But first of all, this is a knightly organization that maintains official relations with Russia and formally has no relation to Masonry. Second, these medals were awarded to Boris Nikolaevich by quite an extravagant personality – Dzhuna Davitashvili, who has also called her self a colonel-general of the astral forces. It stands to reason that she isn’t a member of the Sovereign Military Order of the Hospitallers of St. John of Jerusalem, Rhodes and Malta, if only because women are not admitted. It’s also known that Dzhuna is a member of a certain social organization to which the present order relates quite negatively.

After the Yeltsin regime’s establishment of official relations with the Maltese Order, a branch of Catholic Knights of Malta appeared in St. Petersburg. It was founded by V. Feklist, “plenipotentiary of the World Parliament of the Knightly Maltese Order.” Aside from the Catholic Maltese Order, an “Orthodox Maltese Order” became active, founded by Archbishop Makarios. The Order is directed from London and enjoys the financial support of rich Greek Masons in the United States. The method of doubling in intelligence practice is a usual phenomenon. As is the counterintelligence technique by which a suspect is alternately interrogated by a “good cop” and a “bad cop.”