– “…Not only were the families at home able to meet their production needs, but extra food was available to be processed and sent to the men and women fighting in the war. Victory gardens were no minor effort. In fact, during WWII in the United States, victory gardens supplied one-third of the food for our country. Elinor Roosevelt even planted a victory garden on the White House lawn”

When you hear the words “victory garden,” it probably brings back memories of history class and your grandmother in her garden hilling potatoes and reminiscing about her family’s experiences during the war.

The traditional victory garden, also called a war garden, was a patriotic garden that families grew during World War I and World War II. People had less money, there was a food crisis, and citizens wanted a way to support the efforts of troops overseas. A household garden that could ease the cost of feeding a family while also ensuring more food reached the men and women at war was the perfect answer.

Victory gardens were not limited to America. They were popular in Europe, Canada, and Australia during both World Wars. Posters from the time featured the slogan, “Grow Your Own, Can Your Own.” Canada famously started the motto, “A Vegetable Garden for

Every Home,” and Australia referred to their garden campaign as “Dig for Victory”.

When Did Victory Gardens Begin

Victory gardens were initially a military effort started during World War I. While they were popular at the time, it was during the Second World War that the idea really caught on.

Agricultural workers and farmers in America and Europe were enlisted to fight in the war. This meant that there was less food being produced and many places in Europe were having a food shortage crisis. Food rations were common during WWI and the government wanted to avoid civil unrest. On top of that, soldiers overseas needed to be fed, but commercially produced food was being used to feed Americans at home.

By promoting the idea of the victory garden, the military was helping to ensure that citizens at home had enough to eat while still having enough left over to send to the troops fighting in the war.

The unified effort paid off. Not only were the families at home able to meet their production needs, but extra food was available to be processed and sent to the men and women fighting in the war.

Victory gardens were no minor effort. In fact, during WWII in the United States, victory gardens supplied one-third of the food for our country. Elinor Roosevelt even planted a victory garden on the White House lawn.

According to Popular Mechanics Magazine, in 1943, there were eighteen million victory gardens in the United States. The majority of them were in the cities, where there were twelve million gardens, with another six million in rural areas.

Getting the Word Out

The Defense Department and the Department of Agriculture created posters and pamphlets to distribute to citizens to encourage them to participate. The victory garden was more than planting food. It was about boosting morale and fostering a common feeling of patriotism.

A public campaign run primarily by women’s groups taught classes and distributed seeds so the new gardeners would be successful. School children were enlisted and gardens were put in at school grounds.

What Did People Grow? 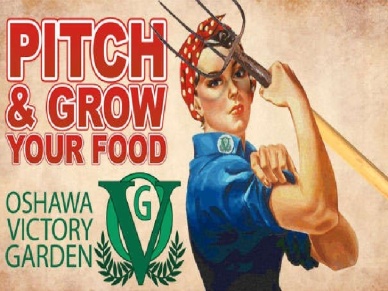 According to the History Channel, the most abundant crops were beans, beets, cabbage, carrots, kale, kohlrabi, lettuce, peas, tomatoes, turnips, squash, and Swiss chard. Many of these crops were easy to store or preserve, which helped people be able to better plan to have food in the winter.

We often think of victory gardens as primarily vegetable-based, but they were so much more than that. In England, farmers were allowed to graze sheep in sport fields and other public commons. This provided cheap mowing and allowed the animals to fatten up for slaughter.

Are victory gardens a thing of the past? Heck no! While they may go by a different name, today’s victory gardens are based on our desire to provide food for our loved ones. Growing our own food helps us to become self-sufficient. It also helps lower our grocery bill so that we can use our money on other resources.

The victory garden led to a renaissance in gardening and is believed to be the foundation of the back to the land movement of the 1970s and the jumping point for modern organic agriculture.

Today, we see the legacy of the victory garden in the homesteader who wants to become more self-sufficient and in the urban community gardens where people gather to grow healthy food. No doubt that’s why shows such as PBS’s Victory Garden Edible Feast have become popular on television.

On top of that, today’s home gardening is easier than it used to be, so it makes sense to take advantage. Our modern technology also offers us numerous ways to preserve our food. Things like electric or even solar dehydrators were not available in the 1940s. Freezers were just being invented and were not mass marketed till the 1950s.

How to Start a Victory Garden

The first step to starting a victory garden of your own is to find out what your planting zone is. This will help you determine what you can grow and the best times to plant each crop. Some plants, like peas and broccoli, prefer cool weather. Other crops – squash and tomatoes, for instance – flourish when it’s sunny and warm.

The other thing you want to consider is the length of time that crops take to mature. Some plants, like radishes and lettuce, grow quickly and give you a meal in a month. Other crops, like corn and watermelon, may take over 100 days to mature.

After you’ve figured these two elements out, it’s time to decide what you want to grow. Many people grow what their neighbors do or decide based on what plants they find at the store. But that’s not a good way to choose.

Ask your family what their favorite foods are. Do they like salsa? Grow tomatoes, onions, and cilantro. Are they big salad eaters? Plant a garden with lots of different kinds of lettuces, kale, and spinach.

Pick high-quality seeds and plants. Buy seeds from a reputable sustainable company. They’ve been tested to check their germination rates and are ready to grow. When picking out plants at the store, choose ones that still fit neatly in their containers. If they’re overgrown, they will have tangled roots that will stunt their growth even after planting.

Also, look for plants with nice green leaves and check under the leaves for insects. You don’t want to bring home any critters to your new garden.

The next step is to determine where to plant your garden. Pick a location that gets at least six hours of sunshine a day. You don’t want to garden under a large tree because most plants won’t be happy in the shade.

Space may be a challenge if you’re in an urban area. Planters on a sunny patio will do fine. If you live in an urban area, community gardens make great places to meet others and learn new skills.

You also want to consider your soil. Heavy clay or soil with lots of rocks is going to take lots of compost to bring up it to a healthy level. One advantage of raised beds is that you can custom make the soil you put in.
Test your soil. This is especially important if you are establishing a new bed. You’ll want to know the pH and BPK levels so you can start building healthy soil.

When I was writing this article, I found it fascinating to look at the old garden plans and watch some of the videos from the 40s. There were a lot of differences from the way many people garden then and the way we garden now.

It reminded me of my grandmother’s gardens, where everything was well tilled and in straight rows with labels. Hoeing was done monotonously by going up and down the rows with a hand or wheeled hoe.

The majority of plants were things that people would cook, preserve or put in a root cellar. They did not plant nearly as many varieties – such as greens – for fresh eating. Lettuce was considered more of a garnish and less of a meal. Kale, endive and mesclun greens were not as common as they are today.

Gardening has changed over the years. So many people have flocked to urban areas that gardeners had to find new methods to grow their favorite foods in a smaller place. Even people on large farms have embraced more efficient methods.

Today there are lots of different ways to grow a garden that don’t require the same investment in time and space. For instance, square foot gardening lets you grow a lot of food in a small space. Raised bed gardens are a smart alternative if you have heavy clay soil, as I do. You can even use water troughs to make a unique and efficient garden!

Why Grow a Victory Garden?

The history of the victory garden will inspire you to get out in the garden and start planting! You may not have the pressure of needing to feed the troops, but your family will appreciate your efforts.

Getting started with a victory garden is also a wonderful way to enjoy fresh air, exercise, and relaxation, all while providing healthy food for your family. And if we ever have a SHTF situation, you’ll be much more prepared.

One thought on “RESILIENT LIVING: The Fascinating History of the Victory Garden & How to Create One Today – By Ame Vanorio”