– “…While she famously succeeded in defeating the Romans in three great battles, their victories would not last. The Romans rallied and eventually crushed the revolts, executing thousands of Iceni and taking the rest as slaves. Boudicca’s name has been remembered through history as the courageous warrior queen who fought for freedom from oppression, for herself, and all the Celtic tribes of Britain”

Boudicca: The Celtic Queen Who Unleashed Fury on the Romans – By Joanne Gillan

“We British are used to women commanders in war; I am descended from mighty men! But I am not fighting for my kingdom and wealth now. I am fighting as an ordinary person for my lost freedom, my bruised body, and my outraged daughters…. Consider how many of you are fighting — and why! Then you will win this battle, or perish. That is what I, a woman, plan to do!— let the men live in slavery if they will”

These are the words of Queen Boudicca, according to ancient historian Tacitus, as she summoned her people to unleash war upon the invading Romans in Britain. Boudicca, sometimes written Boadicea, was queen of the Iceni tribe, a Celtic clan which united a number of British tribes in revolt against the occupying forces of the Roman Empire in 60-61 AD.

While she famously succeeded in defeating the Romans in three great battles, their victories would not last. The Romans rallied and eventually crushed the revolts, executing thousands of Iceni and taking the rest as slaves. Boudicca’s name has been remembered through history as the courageous warrior queen who fought for freedom from oppression, for herself, and all the Celtic tribes of Britain.

Little is known about Boudicca’s upbringing because the only information about her comes from Roman sources, in particular from Tacitus (56 – 117 AD), a senator and historian of the Roman Empire, and Cassius Dio (155 – 235 AD), a Roman consul and noted historian. However, it is believed that she was born into an elite family in the ancient town of Camulodunum (now Colchester) in around 30 AD, and may have been named after the Celtic goddess of victory, Boudiga.

As an adolescent, Boudicca would have been sent away to another aristocratic family to be trained in the history and customs of the tribe, as well as learning how to fight in battle. Ancient Celtic women served as both warriors and rulers, and girls could be trained to fight with swords and other weapons, just as the boys were.

Celtic women were distinct in the ancient world for the liberty and rights they enjoyed and the position they held in society. Compared to their counterparts in Greek, Roman, and other ancient societies, they were allowed much more freedom of activity and protection under the law.

Celtic woman were trained to use swords and other weapons. ( Journeying to the Goddess )

In 43 AD, before the time that Boudicca reached adulthood, the Romans invaded Britain, and most of the Celtic tribes were forced to submit. However, the Romans allowed two Celtic kings to retain some of their traditional power as it was normal Roman practice to allow kingdoms their independence for the lifetime of their current king, who would then agree to leave his kingdom to Rome in his will.

One of these kings was Prasutagus, whom Boudicca went on to marry at the age of 18. Their wedding was celebrated for a day and a night and during this time they also gave offerings to the Celtic gods. Together they had two daughters, called Isolda and Siora.

However, it was not a time of harmony for Boudicca and Prasutagus. The Roman occupation brought increased settlement, military presence and attempts to suppress Celtic religious culture. There were major economic changes, including heavy taxes and money lending.

In 60 AD life changed dramatically for Boudicca, with the death of her husband. As Prasutagus had ruled as a nominally independent, but forced ‘ally’ of Rome, he left his kingdom jointly to his wife and daughters and to the Roman emperor. However, Roman law only allowed inheritance through the male line, so when Prasutagus died, his attempts to preserve his line were ignored and his kingdom was annexed as if it had been conquered.

“Kingdom and household alike were plundered like prizes of war…. The Chieftains of the Iceni were deprived of their family estates as if the whole country had been handed over to the Romans. The king’s own relatives were treated like slaves.” — Tacitus 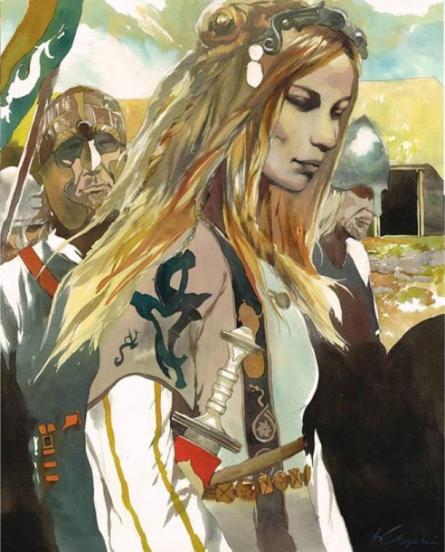 To humiliate the former rulers, the Romans confiscated Prasutagus’s land and property, took the nobles as slaves, publicly flogged Boudicca, and raped their two daughters. This would prove to be the catalyst which would see Boudicca demanding revenge against the brutal invaders of her lands. Tacitus records the words spoken by Boudicca as she vowed to avenge the actions of the Roman invaders :

“Nothing is safe from Roman pride and arrogance. They will deface the sacred and will deflower our virgins. Win the battle or perish, that is what I, a woman, will do.”

And so Boudicca began her campaign to summon the Britons to fight against the Romans , proving that ‘hell hath no fury like a woman scorned’. 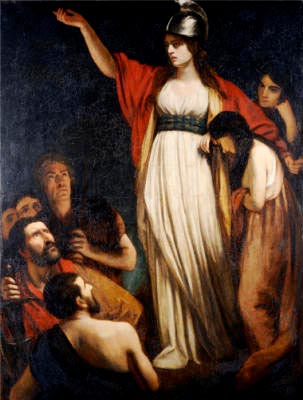 One thought on “REBEL YELL: ‘Boudicca’, The Celtic Queen Who Unleashed Fury on the Romans – By Joanne Gillan”