– “…A new study by Indian and American researchers confirm how Winston Churchill caused the Bengal Famine and starved over 3 million Indians to death. Glorified as the “Saviour of the World” in the west and dubbed the “Butcher of Bengal” by Indians, the streets of eastern Indian cities were lined with corpses as a direct result of Churchill’s policies. Yet, the story of this Indian Holocaust remain unspoken to this day”

A new study by Indian and American researchers confirm how Winston Churchill caused the Bengal Famine and starved over 3 million Indians to death. Glorified as the “Saviour of the World” in the west and dubbed the “Butcher of Bengal” by Indians, the streets of eastern Indian cities were lined with corpses as a direct result of Churchill’s policies. Yet, the story of this Indian Holocaust remain unspoken to this day. 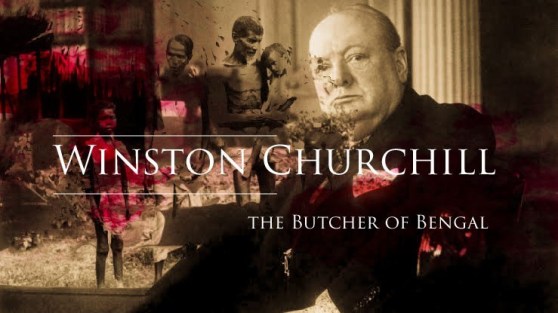 The Bengal famine of 1943 was the only one in modern Indian history not to occur as a result of serious drought, according to a study that provides scientific backing for arguments that Churchill-era British policies were a significant factor contributing to the catastrophe.

Researchers in India and the US used weather data to simulate the amount of moisture in the soil during six major famines in the subcontinent between 1873 and 1943. Soil moisture deficits, brought about by poor rainfall and high temperatures, are a key indicator of drought.

Five of the famines were correlated with significant soil moisture deficits. An 11% deficit measured across much of north India in 1896-97, for example, coincided with food shortages across the country that killed an estimated 5 million people.
However, the 1943 famine in Bengal, which killed over 3 million people, was different, according to the researchers. Though the eastern Indian region was affected by drought for much of the 1940s, conditions were worst in 1941, years before the most extreme stage of the famine, when newspapers began to publish images of the dying on the streets of Kolkata, then named Calcutta, against the wishes of the colonial British administration.

In late 1943, thought to be the peak of the famine, rain levels were above average, said the study published in February in the journal Geophysical Research Letters.

“This was a unique famine, caused by policy failure instead of any monsoon failure,” said Vimal Mishra, the lead researcher and an associate professor at the Indian Institute of Technology, Gandhinagar. 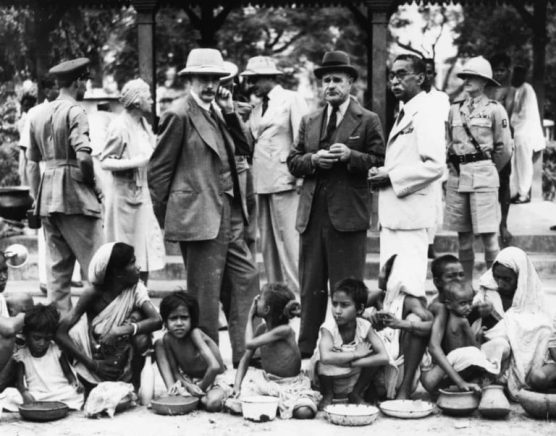 The Rotary Club relief committee at a free kitchen in Kolkata in 1943. Photograph: Keystone/Getty Images

Food supplies to Bengal were reduced in the years preceding 1943 by natural disasters, outbreaks of infections in crops and the fall of Burma – now Myanmar – which was a major source of rice imports, into Japanese hands.

But the Nobel prize-winning economist Amartya Sen argued in 1981 that there should still have been enough supplies to feed the region, and that the mass deaths came about as a combination of wartime inflation, speculative buying and panic hoarding, which together pushed the price of food out of the reach of poor Bengalis. 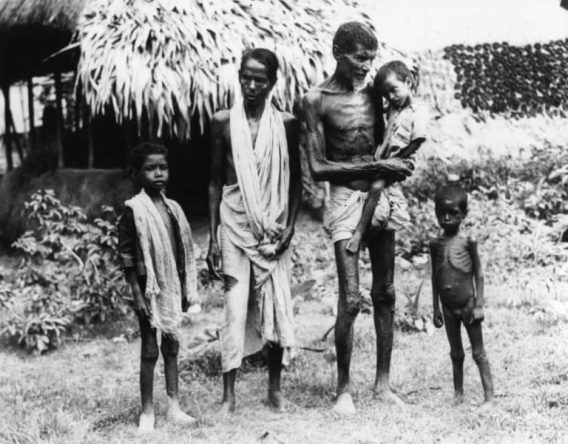 An emaciated family who arrived in Kolkata in search of food in November 1943. Photograph: Keystone/Getty Images

More recent studies, including those by the journalist Madhushree Mukerjee, have argued the famine was exacerbated by the decisions of Winston Churchill’s wartime cabinet in London.

Mukerjee has presented evidence the cabinet was warned repeatedly that the exhaustive use of Indian resources for the war effort could result in famine, but it opted to continue exporting rice from India to elsewhere in the empire.

Rice stocks continued to leave India even as London was denying urgent requests from India’s viceroy for more than 1m tonnes of emergency wheat supplies in 1942-43. Churchill has been quoted as blaming the famine on the fact Indians were “breeding like rabbits”, and asking how, if the shortages were so bad, Mahatma Gandhi was still alive.

In 1800 East India Company annexed #Surat and signed a treaty with the Nawab. Ruthlessly the treaty was violated leaving port city of Surat and Nawab’s descendants on verge of destitution; following which rose a Prince who defeated EIC on their own soil. https://t.co/FziDOgdeGP

Mukerjee and others also point to Britain’s “denial policy” in the region, in which huge supplies of rice and thousands of boats were confiscated from coastal areas of Bengal in order to deny resources to the Japanese army in case of a future invasion.

During a famine in Bihar in 1873-74, the local government led by Sir Richard Temple responded swiftly by importing food and enacting welfare programmes to assist the poor to purchase food.

Almost nobody died, but Temple was severely criticised by British authorities for spending so much money on the response. In response, he reduced the scale of subsequent famine responses in south and western India and mortality rates soared.

Charles Darwin – The Godfather of Eugenics

Charles Darwin is regarded as the father of the science of evolution in India and many other countries. He gave us the Theory of Evolution and his thesis later became fodder for Spencer’s Survival of the Fittest theory – a basis for free-market capitalism followed by the East India Company then as Free-Trade and as Globalization now by the Multinational corporations.

John G. West, senior fellow at the Discovery Institute in his path breaking study reveals how Darwin prepared the way for eugenics. Indeed, his immediate family would soon be involved in that movement — his sons George and Leonard became active in promoting it (Leonard serving as “president of the Eugenics Education Society, the main eugenics group in Great Britain”), and his cousin Francis Galton became the founder of the “eugenics crusade.” Evidently, Darwin was sympathetic to eugenics: West quotes him as vowing “to cut off communication” with his disciple Mivart when the latter “criticized an article by Darwin’s son George that advocated eugenics.”

The Darwinian basis for eugenics is often down­played, West observes, yet it is a fact that eugenicists drew their “inspiration” directly from Darwinian biology. A number of the chief eugenicists of the early 20th century declared that natural selection was the “law” they followed to improve the race. Moreover, the American leaders in eugenics, who were “largely university-trained biologists and doctors” affiliated with places like Harvard, Princeton, Columbia, Stanford, and the Museum of Natural History, presented eugenics as biologically “justified.” Between 1920 and 1939, West shows, Darwin’s theory was constantly used in high-school biology textbooks to support eugenics, something that shows how much mainstream science accepted this form of population control.

By having their racial superiority supported by Darwin’s theories, these Oligarchs for nearly 200 years, have gone on a rampage against what they consider to be inferior races leading to the Indian Holocaust and genocide of entire populations—including the indigenous peoples of the America’s, Africa, Asia, Australia, along with those of Jewish heritage.

Population Control Law is actually Agenda 21 which is a British policy to reduce the population of former colonies like India through various sterilization projects and other policies implemented through the United Nations and popularised by Hollywood to effectively keep nations under Anglo-American orbit.

Population Control Law – a British policy to reduce population of former colonies like India through various sterilization & other policies implemented through United Nations & popularised by Hollywood to effectively keep nations under Anglo-American orbithttps://t.co/n8EYOIELs2

On Dec. 10, 1974, the U.S. National Security Council under Henry Kissinger completed a classified 200-page study, “National Security Study Memorandum 200: Implications of Worldwide Population Growth for U.S. Security and Overseas Interests.” The study falsely claimed that population growth in the so-called Lesser Developed Countries (LDCs) like India was a grave threat to U.S. national security. Adopted as official policy in November 1975 by President Gerald Ford, NSSM 200 outlined a covert plan to reduce population growth in those countries including India through birth control, and also, implicitly, war and famine. Brent Scowcroft, who had by then replaced Kissinger as national security adviser, was put in charge of implementing the plan. CIA Director George Bush was ordered to assist Scowcroft, as were the secretaries of state, treasury, defense, and agriculture.

The bogus arguments that Kissinger advanced were not original. One of his major sources was the Royal Commission on Population, which King George VI had created in 1944 “to consider what measures should be taken in the national interest to influence the future trend of population.” The commission found that Britain was gravely threatened by population growth in its colonies – the biggest being India, since “a populous country has decided advantages over a sparsely-populated one for industrial production.” The combined effects of increasing population and industrialization in its colonies, it warned, “might be decisive in its effects on the prestige and influence of the West,” especially effecting “military strength and security.

In the late 90s secret meetings took place in London where the blueprint for the return of East India Company was drafted. Called #Vision2020 the scheme was a brainchild of an American consultancy firm born out of US military #McKinsey & #BigFour. #Kashmirhttps://t.co/nYgGQ0FAdj

NSSM 200 similarly concluded that the United States was threatened by population growth in the former colonial sector. It paid special attention to 13 “key countries” in which the United States had a “special political and strategic interest”: India, Bangladesh, Pakistan, Indonesia, Thailand, the Philippines, Turkey, Nigeria, Egypt, Ethiopia, Mexico, Brazil, and Colombia. It claimed that population growth in those states was especially worrisome, since it would quickly increase their relative political, economic, and military strength.

This policy, known infamously as ‘Depopulation Policy’ and now being normalised through Hollywood movies, the latest being Mission Impossible: Fallout and most aptly personified by Thanos in Marvel’s Infinity War was imported to India via the United Nations’ Agenda 21.

This 1974 memorandum drafted by Henry Kissinger led directly to the unleashing of experimental vaccines on the unsuspecting public. It sighted countries as targets for “initial population reduction experimentation to be implemented around the year 2000″. They identified India, Bangladesh, Pakistan, Nigeria, Mexico, Indonesia, Brazil, Philippines, Thailand, Egypt, Turkey, Ethiopia & Columbia for study. 3 million Filipinos ages 12-48 were given a test vaccine that ruined their health. North American black & native American women were each given the same vaccine resulting in sterility rates of 25% & 35% respectively. The directive came from the WHO and was directly tied to Kissinger’s report.

These deadly theories were prevalent among the high circles of the British Empire and the East India Company. Winston Churchill the Saviour of the World from the Nazis not only promoted Darwinian eugenics in words and deeds but was directly related to Charles Darwin – they share the same bloodline. It is in the context of this guiding philosophy that Churchill said, “I hate Indians. They are a beastly people with a beastly religion. The famine was their own fault for breeding like rabbits.”

Recently a team of scientists from US & Australia did excavations around Anantapur Kadapa Prakasam of AP, Bellary of Karnataka & Sarvanarasimha Swamy temple in Sirivella mandal areas hunting for temple treasures hidden around these areas. #RobbingGodhttps://t.co/aBoeSJYKQd pic.twitter.com/rM8NrQzWIc

However it was the series of Churchill’s decisions between 1940 and 1944 that directly and inevitably led to the deaths of over three million Indians. The streets of eastern Indian cities were lined with corpses as a direct result of these policies. Yet, the story of this Indian Holocaust remain unspoken to this day. What is more is that the people of India are a long way to acknowledge the role of Darwinian theories in causing the Indian Holocaust. While countries around the world are starting to realize and reject these dubious and deadly theories of eugenics and taking it off from their school textbooks, why are we Indians still teaching our kids about them and praising this Godfather Of Eugenics?

This historical conflict between the British, the Church, the FreeMasonic Orders and the French — in the context of which India became a victim is explained in the book India in Cognitive Dissonance.

One thought on “HIDDEN HISTORY: ‘The Butcher of Bengal’, Winston Churchill & The Indian Holocaust”