– “…A white bison was born [there] in 1933.” The birth of this calf fulfilled the Canadian tribes most sacred prophecy, signifying just as the Lakota prophecy does; a future era of hope and renewal that will bring about peace and harmony among all people of Earth”

Mythological Creatures Are Among Us: Tatanka Ska – The Sacred White Bison – By Kevin Engle

Iconic myths about the American White Bison are scattered among the oral tradition of various Native American tribes stretching from Canada to Mexico. Respected mythologist Joseph Campbell sometimes shared the essence of the white buffalo mythology in his lucid lectures. He spoke of the abundant wisdom and universal truth to be found in the seed of such oral tradition. Campbell declared the white bison oral stories to be more than myth. He characterized them as: “the keepsake of a sustainable culture.” For nearly two millennia, clans of America’s Great Plains have revered White Buffalo Calf Woman . She is entwined in the core beliefs of modern native spirituality. Among white bison lore, the Lakota mythos prevails and speaks of a heavenly entity with a fascinating prophecy. 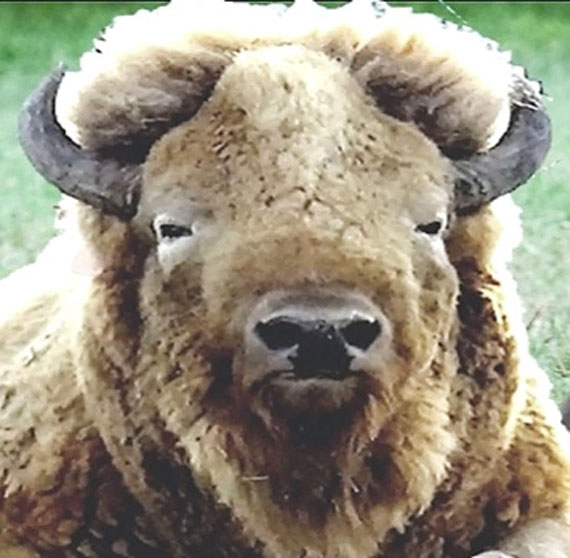 In Memory of “Arizona” – Courtesy of the White Bison Association

Dating back nineteen life-time generations by Lakota accounts, the white bison became immortal when a mysterious spirit being known as a Wakan Wiyan (holy woman spirit) visited a gathering of the Teton tribes in the Sacred Black Hills of South Dakota. This angelic being first materialized before two scouts up on a ridgetop. The men were surveying the land by the elder’s command, looking for game to feed the gathered clans. Crossing the sky like a wohpe (shooting star), Wakan appeared before the scouts in the form of a lovely native woman. She was au naturel . Her long black hair covered her like a thick Tashina Pte (buffalo skin robe).

Reminiscent of fire, brimstone, flaming sword and retribution seeking angels of the Old Testament, Wakan Wiyan was compelled to display her great powers. One of the scouts expressed his desire for this beautiful woman spirit. He claimed her for his teepee and went to embrace her without consent. He was enveloped in a swirling cloud of smoke. When it cleared, the irreverent scout was reduced to a pile of worm filled, scorched bones! The remaining brave thought to draw his bow on this dangerous woman, in fear for his life, but he wisely decided against it. He realized a great Wakan was before him. The scout averted his eyes and began to pray. He was rewarded for his humility and respect. The angelic spirit being kindly bid the honorable brave to go to his people and announce her coming visit. Do not mourn your companion she said, he has gone where he wished to be . Back in camp, the scout told of meeting a Wakan Wiyan and explained the fate of his companion. He implored the people to setup a Big Medicine Tipi in the heart of the encampment, so all could be blessed by her divine presence.

Four days later, the lovely Wakan appeared in camp astride a massive bison. The creature reminded the people of an ancient story the elders recite. She was dressed in white buckskin and adorned with the finest fringe, feather, quill and color, ever seen. Her exquisitely braided hair almost touched the ground and the beads on her moccasins sparkled like the stars as she walked. Wakan pronounced to the people she had come to provide the clans with abundance. A great feast ensued in her honor. She served everyone, feeding the children first, the mothers and elders next, then Wakan honored the men. For several days after, she taught the clans ceremonies honoring Makoce Ina (Earth Mother), Wakan Tanka (Grandfather Creator), and Tunkasila (Great Spirit Mystery). The ceremonies were created for: The Sweat Lodge – Naming – Healing – Adoption – Marriage – Vision Quest, and Sundance Ceremonies. Her gifts to the Teton tribes were the ceremonies of gratitude accompanied by song and dance, the sacred ceremonial prayer pipe ( Chanunpa), and the trilogy of maize, melon, and squash seed. Wakan asked the clans to cherish the Chanunpa and evoke the Sacred Ceremonies often. She advised them to share her seeds and prophecies with all human beings. In return, the prayers of the clans would be answered.

As she departed, Wakan promised to reappear during: “ A Time of Great Change” . I will see you again , she said . Until then, you will find me in the smoke of the Chanunpa. The people watched Wakan Wiyan shapeshift into a black colored bison calf, then a brown calf, a yellow one, and finally the sacred white bison calf. As the white calf galloped away, a herd of bison appeared and began grazing near the encampment, blessing the clans with abundance. Since then, Wakan’s given name has been Ptesan Wi (White Buffalo Calf Woman). Aho!

Undoubtedly one of the most hopeful of all mystical prophecies, the four colored calves White Buffalo Calf Woman revealed portray a symbolic symbiosis among the four races of humanity, and a metaphorical unification of the four great islands (continents). No matter when this prophecy is said to come true, this Wakan upholds great respect, necessitates veneration towards all creation, and facilitates profound spiritual/intellectual awakening. Above all, this primal theology of a sustainable culture speaks to humanity’s dire need to rekindle great respect for Makoce Ina; our Sacred Mother Earth.

In the annals of written history, a few Euro-American wagon train journals describe seeing the rare white bison as determined pioneers came west across America’s Great Plains . The respected explorer and author Dr. Josiah Gregg wrote an internationally popular book about his experience of traveling along America’s Santa Fe Trail. Gregg states: “In 1833, a white bison was killed by the Cheyenne. The Cheyenne [sacrificed the sacred bison in good faith] during the Leonid Meteor Shower (The Night the Stars Fell) and scribed a peace and trade treaty [with the U.S.] on its skin.” This hide is on display at Bent’s Old Fort in La Junta, Colorado; a National Historic Site. 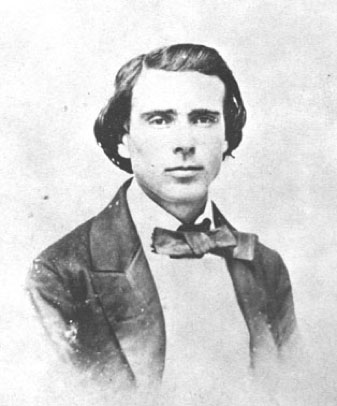 Dr. Josiah Gregg reportedly died in early 1850, near the north shore of Clear Lake, California. In November of 1849, he embarked on an expedition from the Trinity gold fields to locate and map the elusive Humboldt Bay. Starting with only ten days provisions, Gregg’s party did find and survey Humboldt Bay but over a month expired in the process. After mapping the bay, the men wandered south through the ancient redwood forest of the Mayacamus Mountains, heading to San Francisco. They exhausted all provisions and harsh winter weather struck them. Game was scarce, ammunition and morale low. In fact, the party split up. A published account of The Mad River Incident tells of well-earned animosity held by Gregg towards a few members of his crew for their disloyalty. In mid-February of 1850, unable to find a trail through the impenetrable mountain terrain, Gregg changed direction, heading east to Sacramento. On February 25 th, at Clear Lake’s north shore, Josiah Gregg became so cold, hungry, and weak, he fell off his horse. It’s said he died from the fall and was buried under a pile of rocks by his companions. Suspicion arose in Sacramento when the crew arrived. The men could not account for Dr. Gregg’s precious transit, sextant, and expedition journals. Gregg’s descendants offer an alternate version of his disappearance. They claim a Clear Lake native woman (likely of the Dannoka clan) found him in the bush, barely alive. She revived Josiah Gregg and he lived with “The People of the Lake” for the rest of his days .

A century to the year after Josiah Gregg witnessed the symbolic Cheyenne white bison treaty, a landmark event confirmed by Canada’s First Nations says: “A white bison was born [there] in 1933.” The birth of this calf fulfilled the Canadian tribes most sacred prophecy, signifying just as the Lakota prophecy does; a future era of hope and renewal that will bring about peace and harmony among all people of Earth. Since 1933, across the North American Continent, several white bison have been born. Most in the past few decades

The DNA of Antiquity

Scientifically speaking, why are some buffalo white? Are they albino or a beefalo? (Beefalo are a cattle and bison crossbreed). In fact, the true white bison is the result of a recessive, leucistic gene, not albinism or a hybrid. Just as the polar bear is white by design, the massive bison of the ice ages (Bison Antiquus) were likely to be white, evolving over time to yellow, brown, or black coloration as diet, locale and climate changed. An explanation for the trait of white coloration is the genetic law which states that genes available to any organism come directly from the parents. Fewer parents produce less diversity. That means recessive genes and mutations, such as white coloration, tend to proliferate in an isolated, low population scenario. This effect is known as genetic drift . The intended extermination of thirty million bison in the 1870’s, by anti-native factions bent on starving the plains tribes, created a genetic bottleneck reducing the bison genetic code to its roots in The DNA of Antiquus . Genes are also sensitive to extreme environmental fluctuations and the biological stress of modern-day pollution. The proposal being: The American Bison appears to be on genetic alert, preparing to revert to a time when white coloration was a dominant gene. This radical response to a lack of genetic diversity, climate change and environmental toxicity entertains several questions.

What are the Odds?

Considering the odds of a white bison birth are estimated to be one in ten million, the math doesn’t add up. Only about twenty to thirty thousand genetically pure American Plains Bison exist. Another half million are hybrid beefalo. With these odds in mind, one authentic white bison birth becomes an astronomically remote chance. So why the sudden resurgence? Since 1933, when Big Medicine was born in Montana, forty (40) white bison births have been documented across North America! Others go unreported. Questions arise as to the genetic origins of these animals. Statistically, a few are likely to be albinos, and more are surely Charolaise White Beefalo. In any case, two white bison are presently roaming about that were

DNA tested at The University of California, Davis. U. C. Davis confirmed both specimens are healthy, pure blooded American Plains Bison. There are other obvious candidates across the North American Continent that merely lack formal genetic authentication. This tally radically defies the odds, reinforcing the native prophecy of a time when four calves will be born white and progressively change colors prior to the return of Ptesan Wi. Are we currently in what White Buffalo Calf Woman referred to as: A Time of Great Change? Is the recent proliferation of white bison a genetic, environmental, as well as spiritual sign of the culmination of her prophecy?

Continuing with this vein of thought, what are the odds of The Guardians of the Sacred White Bison (Cynthia Hart-Button and her husband Charles) bringing a herd of these magnificent mythical creatures to Lake County, California? Astronomical? Maybe yes and maybe no… but it is so. Cynthia Hart’s amazing story and her life with Tatanka Ska is, as the Navaho people say: Hozho Naasha; A Walk in Beauty.

This story will be continued in the following installment: Mythological Creatures Are Among Us: Guardians of the Sacred White Bison .

*To keep informed about the White Bison, dates of community projects & spiritual workshops, or to make a tax-deductible contribution to help sustain the herd, go to: www.whitebisonassociation.com

One thought on “RAINBOW WARRIOR: ‘Tatanka Ska’, Mythological Creatures Are Among Us, The Sacred White Bison – By Kevin Engle (Archive)”