– “…The real trouble is that most in the establishment media—and the centrist political elite like Clinton, Barack Obama and their allies—fear left populism more than they do right populism. For them, replacing Trump with Sanders would not end the nightmare begun with Trump’s inauguration, it would simply begin a new and more frightening chapter of it”

Tarring Sanders with the same brush as Trump on any grounds is a tactic clearly intended to discredit Sanders among the anti-Trump public. 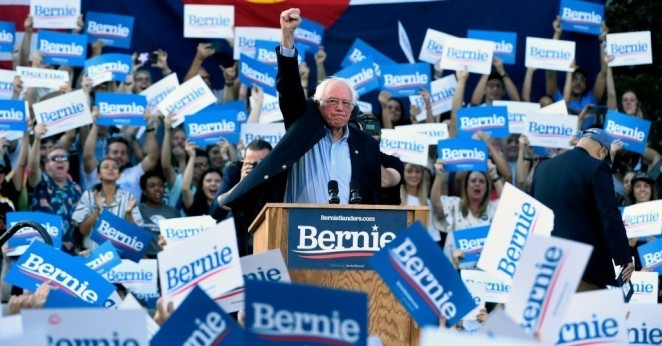 Sen. Bernie Sanders (I-Vt.), a 2020 Democratic presidential candidate, pumps his fist in the air toward supporters as he arrives to speak during a campaign rally at Civic Center Park on September 9, 2019 in Denver. (Photo: Helen H. Richardson/MediaNews Group/The Denver Post via Getty Images)

As Bernie Sanders emerged as a threat to Hillary Clinton’s presidential nomination in 2016, media began liberally tossing around articles equating Sanders and Donald Trump (FAIR.org, 4/15/16, 12/9/16). These typically acknowledged that the comparison seemed far-fetched, but pointed in their defense to some version of a “remarkable amount of policy convergence” (Atlantic, 1/6/16)—which included shared positions like opposition to trade agreements, protecting Social Security, opposing big money in politics, and opposing foreign military intervention—or to the two candidates’ reliance on “angry white men” for their base of support.

No journalist in their right mind would attempt an argument about a policy convergence between Sanders and Trump today, given Trump’s reversal on virtually every one of those original populist stances. And as for those “angry white men,” polls have shown that Sanders’ supporters are more female and less white than those of any other Democratic candidate—and much more so than Trump supporters. If they were an absurd stretch in 2016, then, efforts to make a Sanders/Trump equivalence today are even more desperate and disingenuous.

And yet they are experiencing a renaissance, as Sanders creeps toward the top of the Democratic primary polls in early-voting states.

Dana Milbank (Washington Post, 4/2/19) wrote that “support for Sanders shows that the angry, unbending politics of Trumpism are bigger than Trump.”

trope received its earliest notable rehabilitation in April, when Washington Post columnist Dana Milbank (4/2/19) announced “Bernie Sanders’s emergence as the Donald Trump of the left.” Both have “a flair for demagoguery,” Milbank declared. He accused Sanders of sporting “the angry, unbending politics of Trumpism” and filling his speeches with “Trumpian flourishes”:

Sanders himself remains untouchable, in a Trumpian way. Claims of mistreatment by male staffers from women who worked on his 2016 campaign? Yawn. His resistance to releasing his tax returns? Whatever. The idea that Democrats need a unifying figure to lure disaffected Trump voters in key states? Never mind.

Sanders isn’t Trump in the race-baiting, lender-cheating, fact-avoiding, porn-actress-paying, Putin-loving sense. But their styles are similar: shouting and unsmiling, anti-establishment and anti-media, absolutely convinced of their own correctness, attacking boogeymen (the “1 percent” and CEOs in Sanders’s case, instead of immigrants and minorities), offering impractical promises with vague details, lacking nuance and nostalgic for the past.

CNN (4/3/19) had Milbank on to discuss the column, where he called the candidates’ “blame” tactics “the same idea. ‘Those people’ are responsible for your problems. This is really powerful stuff.” A longtime Clinton aide piggybacked off Milbank’s column, telling the Washington Post (4/15/19) that Sanders’ “tone in general is too Trumplike. It’s based on anger.”

That Sanders apologized for the mistreatment and took active steps to change his 2020 campaign? Yawn. That he released 10 years of tax returns less than two weeks after Milbank’s column was published (and approximately three months before Biden did)? Whatever. The idea that Democrats need a mobilizing force rather than an uninspiring defender of the status quo to drive voter turnout in swing states? Never mind.

Milbank quietly tries to erase the gaping difference between Sanders’ and Trump’s anti-establishment (or “anti-media”) stances, or between Trump’s racist and xenophobic attacks on marginalized groups and Sanders’ structural attacks on neoliberal institutions. In Milbank’s world—a world many of his colleagues appear to inhabit as well—CEOs and billionaires bear as little responsibility for “your problems” (which might include inequality, wage stagnation, underemployment, unaffordable healthcare and education, and climate change) as do “immigrants and minorities.”

The only sense in which Sanders and Trump are alike (beyond extremely superficial similarities sometimes pointed to, like their unruly hair or New York accent) is that they appeal to very real undercurrents of discontent in this country—but they do so in very different ways, to very different effect. Trump is perhaps the epitome of a demagogue; he lies and plays on prejudices, scapegoating marginalized groups, enriching himself and undermining the country’s political system. Sanders critiques the institutions that drive inequality and calls for a revitalization of democracy, in which ordinary people’s needs come before corporate interests. Both are presented as equally objectionable by corporate journalists, who repeatedly counsel a retreat to the safety of the “center” (FAIR.org, 7/2/19)—a place that they are unwilling to recognize has helped produce that discontent.

Those journalists revived the Trump/Sanders equivalence over the summer at the point when Sanders dared suggest that the Washington Post and New York Times are not “great supporters” of his, and that this could have something to do with his repeatedly calling out Amazon for paying no taxes. NPR (All Things Considered, 8/13/19) accused Sanders of “echoing the president’s language,” while on CNN (8/13/19), USA Today‘s Kirsten Powers accused him of using Trump’s “playbook” and CNN’s Poppy Harlow warned ominously, “This seems like a really dangerous line, continued accusations against the media with no basis in fact or evidence provided.” In a Boston Herald column (8/18/19) declaring it was “Time for Bernie to Bow Out With Dignity,” Froma Harrop wrote: “The parallels between Trump and Sanders blaming liberal news sources for their setbacks are pretty glaring.”

Except, of course, that they’re not. As we pointed out at the time (FAIR.org, 8/15/19), there is in fact plenty of evidence of media’s bias against Sanders, and their embarrassingly uncritical coverage of Amazon. Sanders’ critique is far from a conspiracy theory or anti-journalist smear, as many suggested—it’s a critique of the influence of corporate ownership and sponsorship on big media outlets, where journalists with Sanders-like perspectives are almost invariably weeded out early in their careers.
Recently, though, the tarring of Sanders as Trumpian has amped up.

New York Times columnist Paul Krugman (1/20/20) lashed out at Sanders for a supposed “flat-out lie” about Joe Biden’s record on Social Security cuts. Sanders’ “smear” interprets a video of Biden agreeing with Paul Ryan on Social Security cuts as serious rather than as sarcastic, as Biden later claimed it to be. Regardless of how you interpret that moment, it is followed by Biden saying that Social Security “still needs adjustments”—politician-speak for cuts. Even if you take Biden at his word on the sarcasm, that comment—and his decades-long record in the Senate—make it clear that the Sanders campaign’s case against Biden on Social Security is sound (FAIR.org, 1/22/20). But for Krugman:

This is bad; it is, indeed, almost Trumpian. The last thing we need is another president who demonizes and lies about anyone who disagrees with him, and can’t admit ever being wrong.

Sanders is “worse than Trump” (Miami Herald, 1/15/20) because he doesn’t believe the projections of the US International Trade Commission—which economist Dean Baker said “made a conscious decision to go against standard practice in the economics profession” to make NAFTA 2.0 look good (Beat the Press, 4/25/19).

The Miami Herald‘s Andres Oppenheimer took it a step further (1/15/20), writing: “Sanders’ trade isolationism and Trump’s anti-immigration ravings are two sides of the same coin—cheap populism. On the trade side, Sanders is worse than Trump.” To Oppenheimer, Sanders’ “assertion that large numbers of US jobs would be lost” through the USMCA are “as misleading as Trump’s absurd claims that most undocumented immigrants from Mexico are criminals and rapists.”

Sometimes the analogy is slightly more subtle, as in the New York Times editorial board’s explanation (1/19/20) of why it rejected Sanders in its Democratic primary endorsement: “We see little advantage to exchanging one over-promising, divisive figure in Washington for another.”

In the board’s interview with Sanders (1/13/20), board member Nick Fox questioned Sanders about his suggestion that he would be “organizer in chief,” achieving his agenda by mobilizing a movement: “I’m wondering how you flying around the country in 2021 rallying the people would be different than what Donald Trump has been doing.”

While more serious observers recognize a difference between Sanders’ plan to stump for his agenda, which follows historical tradition, and Trump’s penchant for hollow ego-stroking rallies (which does not), the Times paints Trump and Sanders as interchangeable demagogues.

Hillary Clinton has jumped into the fray, in her recent interview with the Hollywood Reporter (1/21/20) in which she accused “the Bernie campaign” of “having gone after Elizabeth [Warren] with a very personal attack on her.” It’s a remarkably disingenuous way to characterize the situation, in which Warren was quoted (CNN, 1/13/20) accusing Sanders of dismissing the possibility of a woman defeating Trump, to which Sanders responded with a forceful denial. But Clinton used that framing to make a new Trump parallel, this one based on treatment of women (and, perhaps, opponents):

I just think people need to pay attention because we want, hopefully, to elect a president who’s going to try to bring us together, and not either turn a blind eye, or actually reward the kind of insulting, attacking, demeaning, degrading behavior that we’ve seen from this current administration.

The Washington Post‘s Jennifer Rubin (1/21/20) cited that interview in a column about Sanders’ “attack machine,” in which Rubin charged Sanders with “present[ing] himself as an honest, pure idealist while playing Trumpian politics.” Her evidence, beyond Clinton’s characterizations of Sanders and of “the culture around him,” consisted of an op-ed (Guardian, 1/20/20) by a Sanders supporter that called Biden “corrupt” (which Rubin acknowledged Sanders apologized for) and “yet another blowup over Sanders’ honesty, his attempt to insinuate that Biden favored Social Security cuts.”

Journalists from outlets like the Post, Times and CNN know that the great majority of their readers and viewers harbor strong feelings of antipathy and fear toward Trump, so tarring Sanders with the same brush as Trump on any grounds is a tactic clearly intended to discredit Sanders among the anti-Trump public.

The real trouble is that most in the establishment media—and the centrist political elite like Clinton, Barack Obama and their allies—fear left populism more than they do right populism. For them, replacing Trump with Sanders would not end the nightmare begun with Trump’s inauguration, it would simply begin a new and more frightening chapter of it. If under Trump, our democratic and social institutions are endangered by authoritarianism, xenophobia and racism, at least our economic ones are protected, so that Wall Street can continue its upward march, corporate profits can continue unabated, and journalists can marvel at the robust economy.

Sanders, on the other hand, seeks to shore up those democratic and social institutions by reining in the corporate ones. For our country’s most influential media outlets, which have thrived under the Trump administration, it’s clear which one is the greater threat.

Julie Hollar is the managing editor of FAIR’s magazine, Extra!. Her work received an award from Project Censored in 2005, and she has been interviewed by such media outlets as the L.A. Times, Agence France-Presse and the San Francisco Chronicle. A graduate of Rice University, she has written for the Texas Observer and coordinated communications and activism at the Lesbian/Gay Rights Lobby of Texas. Hollar also co-directed the 2006 documentary Boy I Am and was previously active in the Paper Tiger Television collective.