– “…Financialization is the mass commoditization of debt collaterized by previously unsecuritized assets, a pyramiding of risk and speculation that is only possible in a massive expansion of low-cost credit and leverage for those at the top of the wealth-power pyramid: financiers, banks and corporations”

The global economy and financial system are both running on the last toxic fumes of financialization and globalization.

For two generations, globalization and financialization have been the two engines of global growth and soaring assets. Globalization can mean many things, but its beating heart is the arbitraging of the labor of the powerless, and commodity, environmental and tax costs by the powerful to increase their profits and wealth. 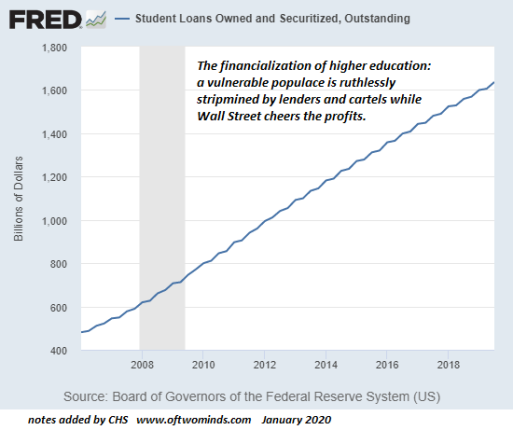 In other words, globalization is the result of those at the top of the wealth-power pyramid shifting capital around the world to exploit lower costs of labor, commodities, environmental regulations and taxes.

This manifests as offshoring of jobs, the stripmining of forests, minerals, etc., the degradation of local ecosystems, the decline of tax revenues derived from capital and the explosive rise in stock market valuations as wages stagnate or decline.

A key element in globalization is the transfer of risk from the owners of capital to the workers and public resources. Examples of this transfer of risk abound: rather than pay workers benefits, corporations game part-time/full-time labor laws so workers’ health insurance is paid by taxpayers (Medicaid). Corporations pay wages too low to survive so workers depend on public-sector assistance (food stamps, etc.)

Rather than provide vehicles to workers who drive for a living, corporations such as Uber and Lyft transfer all the risks of ownership, maintenance and enterprise to the drivers. And so on.

Financialization is the exploitation of assets/income that were previously safe from predation by those with access to low-cost central bank credit. While definitions vary, mine is:

Financialization is the mass commoditization of debt collaterized by previously unsecuritized assets, a pyramiding of risk and speculation that is only possible in a massive expansion of low-cost credit and leverage for those at the top of the wealth-power pyramid: financiers, banks and corporations.

One example is the student loan “industry,” which prior to financialization did not exist. A previously safe from predation asset/source of income–college degrees–has been securitized so that loans issued to students for largely worthless diplomas can be sold globally as “secure assets with guaranteed yields.”

That the exploited class of students have little to no income and no guarantee of income doesn’t matter. What matters is a previously unexploited asset can be turned into debt that can be sold at an immense profit.

And so student loan debt has skyrocketed from near-zero to $1.6 trillion in less than a generation. This rapacious, ruthless exploitation would not have been possible without the central bank (Federal Reserve) and federal government enabling and enforcing the supremacy of private capital and the predation of the higher-education cartel.

The subprime mortgage loan bubble was another example of financialization: a previously inaccessible asset/income–the earnings of households with poor credit ratings–was suddenly available for exploitation, and guaranteed-to-default subprime mortgages were packaged with lower-risk mortgages and sold globally as “secure assets with guaranteed yields.”

That this was outright fraud didn’t matter to either the Federal Reserve or federal government.

Alas, all good predations end when the herd of prey has been dragged to the ground and consumed. All the fruit of financialization and globalization have been plucked by the powerful, and now both the engines of “growth” are sputtering.

The Federal Reserve and other central banks enabled this exploitation, but they’re powerless to extend it: central banks can create nearly free credit for the powerful, but they can’t conjure up new herds to be preyed upon.

As a result, the global economy and financial system are both running on the last toxic fumes of financialization and globalization, the final extremes of exploitation and predation as the pack of predators has exploded in size and influence while the herd of prey has been decimated.

In the dying light of the predators’ last feast, the Fed is worshipped as an omnipotent entity with god-like powers to levitate markets higher forever. But since the Fed is powerless to restore the upward trajectory of financialization and globalization, its omnipotence is about to expire.

The prey always seem limitless to the predators, but this illusion expires when suddenly there is no longer enough for the ravenous pack of financial predators. At that point, the predators turn on each other. That is the narrative that will come to the fore in 2020 and play out in the decade ahead.