– “…Our crisis isn’t just political—it’s structural…the organizations that dominate our economy—centralized corporations and government—become destined to fail. We see this failure in both the soaring inequality that has hollowed out the American Dream as well as in the rising tide of social and political disunity”

Neofeudalism Isn’t a Flaw of the System, It’s the System Working Perfectly – By Charles Hugh-Smith

Fakery is always precarious: the truth about the asymmetries of power might slip out and spread like wildfire.

I’ve been writing about neofeudalism and its cousin neocolonialism for seven years:

The E.U., Neofeudalism and the Neocolonial-Financialization Model (May 24, 2012)

The basic idea here is the socio-economic-political system is structured such that the only possible output is neofeudalism. In other words, neofeudalism isn’t a flaw in the system that can be changed with policy tweaks or electing a new president or PM– it’s the result of the system working as designed.

Neofeudalism is a peculiarly invisible hierarchical structure of power: The New Nobility (or aristocracy if you prefer) wields vast concentrations of political, social and financial power, and does so without the formalized aristocrat-serf relationships and obligations of classic neofeudalism.

We appear to be free but we’re powerless to change the power asymmetry between the New Nobility and the commoners. This reality is reified into social relations that are simulacra of actual power, pantomimes acted out in media-theaters to instill the belief that the foundational myths of democracy and social mobility are real rather than misleading shadows.

Neofeudalism is fundamentally a financial-political arrangement, marketed and managed by cultural elites who strive to convince us that we still have some shreds of power. These elites have a variety of tools at their disposal. One has been described by filmmaker Adam Curtis as pantomime: Trump says/does something outrageous, the Democrats cry “impeachment,” and so on.

This theater of pantomime serves two purposes: it projects a simulation of functional democracy that makes us believe impeaching one president and getting another one in office will change anything about the neofeudal power structure; it won’t.

The theater of pantomime also distracts us from the remarkably stable asymmetry of power in our social-political-financial construct: various ambiguities are blown into “the most important issue of today,” a revolving performance in which virtue-signaling has replaced actual action to remedy the vast imbalances of power, and appeals to myths that no longer manifest in the real world (democracy and social mobility) are used to suppress and marginalize the search for new structures that would upend the cozy incest of neofeudalism’s financial and political power.

I discuss the structure of neofeudalism in my new book Pathfinding our Destiny: Preventing the Final Fall of Our Democratic Republic at some length, and one key takeaway is this: $100 million invested in influencing the central state guarantees $1 billion in private-sector profits. Or $10 billion. The point is the return on investment is unbeatable, and so is the security of the gains.

This marriage of state power to create credit and its monopoly on force with private-sector financial power is the core relation of neofeudalism. The only possible output of this structure is a mass of powerless debt-serfs enriching the New Nobility, who are slavishly served by a nomenklatura class of “liberal” technocrats and managers tasked with promoting pantomimes and simulacra as “the real thing.”

Despite the ubiquity and sophistication of this marketing and management machinery, the debt-serfs sense the entire system is both false and precarious, two intimately related realities, for fakery is always precarious: the truth about the asymmetries of power might slip out and spread like wildfire. 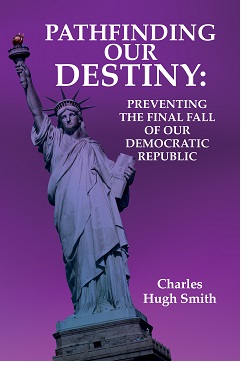 America teeters on the precipice: our government is now captive to special interests and big money, twin cancers that threaten our democracy. This accelerating crisis is exacerbated by a toxic social media-fueled tribalism that has replaced “what do you think?” with “which side are you on?”

Our crisis isn’t just political—it’s structural: as the pace of change explodes from gradual to non-linear, the organizations that dominate our economy—centralized corporations and government—become destined to fail. We see this failure in both the soaring inequality that has hollowed out the American Dream as well as in the rising tide of social and political disunity.

To prevent the fall of our democratic republic, we must transform our economy and society from the ground up. As we enter a new era of rapid, unprecedented tumult, it is we citizens who will need to save our democracy. For our political and financial elites will cling to their centralized power, doing more of what’s failed, even as civil society unravels.

All is not lost–yet. Our way forward starts with understanding the fatal flaws of our brittle, self-serving status quo and embracing this basic truth: better options are available if we’re willing to explore.

To pathfind our way to a better destiny, we must create new localized structures optimized for resilience and adaptability—a flexible, decentralized, sustainable, democratic, opportunity-for-all nation.

One thought on “VOODOO ECONOMICS: Neofeudalism Isn’t a Flaw of the System, It’s the System Working Perfectly – By Charles Hugh-Smith (Archive)”

CONSPIRACY = REALPOLITIK: What Would One Do For All The Money & Power In The World? - SM