– “…The Christian West — along with other global system of patriarchal belief – long imposed a biologically-grounded, belief system defined by two genders (male and female) and one sexuality (heterosexuality). But what if this is not the case? What if gender is, like sexuality and self-identity, more complex, more varied, and evolution over time?”

SM:..I admit, the convoluted sexual landscape of today has me more often then not scratching my head. Nonetheless, if one truly desires a progression towards a more inclusive & compassionate society, learning to operate outside of your comfort zone becomes imperative. Simply, we live in a much more diverse & complex society on all fronts, which requires new ways of adapting & thinking…

The Dialectics of Postmodern Sexual Identity – By David Rosen

Earlier this year Mady G. and J.R. Zuckerberg, two cartoonists and illustrators, published a wonderful nonfiction graphic booklet, A Quick & Easy Guide to Queer & Trans Identities, that is recommended to everyone seeking a better understanding of sexual identity today. They use an image of a cartoon snail, Iggy, to reflect on key issues of sex and gender identity, making the booklet appropriate for younger, teenage, readers.

Mady G. notes in the “Intro,” “the main purpose of self-identification and classification is to foster community and counteract feelings of confusion, otherness, and shame. … [A] person’s personal identity, queer or otherwise, is more tangible if that person can name it and thus own it.”

Iggy and the other plants and animal characters are attractive, drawn in an inoffensive, if dull, pastel pinks and purples. More important, the Guide is a popularly written work revealing the meaning and history of many words and phrases – some disparaging — common to today’s consideration of sexual identity. These include: What does “queer” mean?; what is gender identity?; what does dysphoria means?; what is asexuality?; what does it mean to “come out”?; and what is a queer relationship?

For example, the authors distinguish between gender and sex in the following terms:

Gender “is the social, cultural, and mental state of being male, female, a combination of the two, or neither. It has to do how somebody feels inside rather than what they look like.”

Sex “has to do with reproduction as well as physical and biological make-up and can reference things like chromosomes, genitalia, and hormonal activity rather than mental attributes.”

The Guide suggests just how far popular notions of sexual identity have come from the old days when “heterosexual”/“homosexual” or “straight”/“gay” sufficed. Such terms are so yesterday.

The Human Rights Campaign identifies more than two dozen terms defining sexual identity, ranging from “androgynous” to “transgender”. GLAAD identifies more than a dozen acceptable terms and includes a list of “terms to avoid.” Slate reported in 2015 that Facebook offered users 50 custom gender identifiers. And even USA Today published a list of “LGBTQ definitions every good ally should know.”

The growing number of terms relating to sexual identity suggests a unique historical dialectic. The struggle over language is part of the struggle for self-identity and political legitimacy – it is a struggle that “nonconforming” people have been waging for eons. It reflects the growing social power — and self-empowerment! — of a once shamed (and worse) segment of the population who have found new – if still contested — acceptance.

After a millennium of denial, sexual self-identity is becoming a more complex – more honest – category of personal being and social life. The traditional, conventional, distinctions between male/female and straight/gay are proving inadequate for the truth, reality, of 21st century sexual culture, at least in the more advanced capitalist countries. For as long as humans have been human, there has been a separate category of “other” that infused both dimensions of sexual identity – gender and sex – with disruptive dissonance.
This dissonance has considerable resonance. It included the unacceptable, the illicit, the immoral, the weird, the nonconforming. Postmodern capitalism has fostered a sexual culture in which the other has been mainstreamed, with gender differences acknowledged – accepted! — as a defining feature of human experience and identity, no longer a deviance.

The Christian West — along with other global system of patriarchal belief – long imposed a biologically-grounded, belief system defined by two genders (male and female) and one sexuality (heterosexuality). But what if this is not the case? What if gender is, like sexuality and self-identity, more complex, more varied, and evolution over time?

A century ago, the leading sex researcher was Magnus Hirschfeld, founder of the Institute of Sexual Research in Berlin. His institute existed from 1919-1933, until the Nazis closed it down and famously burned its legendary library. He coined the term “transvestite” and is the author of The Transvestites: The Erotic Drive to Cross-Dress (1910). Anticipating changes that were yet to come, he famously noted: “The number of actual and imaginable sexual varieties is almost unending; in each person there is a different mixture of manly and womanly substances, and as we cannot find two leaves alike on a tree, then it is highly unlikely that we will find two humans whose manly and womanly characteristics exactly match in kind and number.” 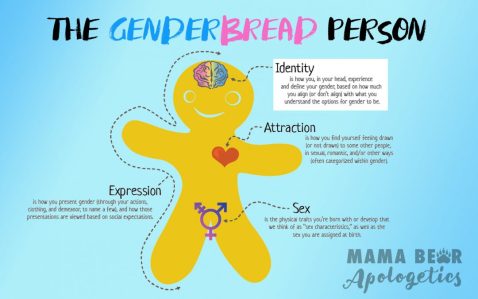 A half-century later, America’s sexual culture began to be transformed due to changes fostered by the post-WW-II consumer revolution. Alfred Kinsey and Harry Benjamin played critical roles in this process.

Kinsey was a PhD biologist, professor of entomology and zoology, who helped define modern sexuality. Mainstream postwar Americas were shocked, shocked, by the revelations about male and female sexuality revealed in Kinsey and his associates’ now-classic studies – Sexual Behavior of Human Male (1948) and Sexual Behavior of Human Female (1953). They represent a landmark in not only empirical research, but moral philosophy as well.

Kinsey and his team revised the then-popular tri-part model of human sexuality — i.e., heterosexual, homosexual and bisexual — into a seven-point spectrum. The new model ran from zero to six in terms of sexual proclivity, or heterosexual-to-homosexual scale; the data was based on the reported sexual practices of his subjects. Each point delineated a very imprecise distinction between men engaged in exclusive heterosexual to exclusive homosexual acts and—with any bell-curve—the greatest segments of the population concentrated somewhere in the middle. For Kinsey, there were no “homosexuals” or, for that matter, “heterosexuals” — only men engaged in sexual acts that were labeled the one or the other. Five years later, in Sexual Behavior of Human Female, Kinsey and his team would find an equally complex sexual culture among American women.

Benjamin was an MD endocrinologist who was among the first medical professionals to treat and study transsexuals; he is author of the pioneering study, The Transsexual Phenomenon (1966). He provided hormone therapy to America’s most celebrated transgender personality, Christine Jorgenson, as part of her gender reassignment procedure. In 1966, Benjamin introduced a modified — but more formal – Kinsey scale, the Sex Orientation Scale (SOS), categorizing those with gender identity issues.

Benjamin’s model, the Standards of Care, remains the cornerstone of the de-facto guidelines for treating sexual reassignment, the WPATH (World Professional Association of Transgender Health) standards.

Over the last decade or so, the gender nonconforming community has grown, drawing support from young people, gender-theory academics and sex-politics activists. Their call for a fuller range of sexual identity recalls — if unacknowledged – Hirschfeld. This shift is gender consciousness is exemplified by the growth of nonconforming networking sites, domains that have moved beyond the conventional identities of male or female, gay or straight.

Most recently, the Proceedings of the National Academy of Sciences (PNAS) recently published a revealing study, “Similarity in transgender and cisgender children’s gender development”; the lead author is Selin Gülgöz, PhD, postdoctoral researcher, Department of Psychology, University of Washington. One of its findings is suggestive as to how sexual culture changes through the experience of transgender kids aged 3 and 12. It reports: “transgender children strongly identify as members of their current gender group and show gender-typed preferences and behaviors that are strongly associated with their current gender, not the gender typically associated with their sex assigned at birth.”

Gülgöz report that “”the overwhelming finding is that transgender children … show strong identification with their current gender, and they show strong preferences for toys, clothing, and peers typically associated with their current gender, and not their assigned sex.”
Jack Drescher, MD, clinical professor, psychiatry, Columbia University, cautions: “This study does not answer the question of why some children develop a transgender identity, or a cisgender identity, for that matter.”

Nevertheless, something profound is at play. The meaning of “sexual identity” – however defined – is profoundly changing. The old model, comforting to the maintaining of political and patriarchal power, is being challenged – and something new is pushing the historical agenda.

The world changes, and so does sexual identity. A century ago, the U.S. confronted WW-I, getting ready for the Roaring ‘20s and – its negative dialectic – Prohibition. The 1920s was a decade distinguished by its new women, jazz and speakeasies. During this period, the social categories that defined male and female sexual identify were not as yet as formal, fixed or exclusionary as they would become in the post-WW-II. In the 21st century, they would become all pervasive.

A century ago, male and female sexual categories were in some important ways less restrictive than they are today. George Chauncey, author of the essential study, Gay New York: Gender, Urban Culture, and the Making of the Gay Male World, 1890-1940, suggests that the 1920s was a more intriguing, complex era than is conventionally acknowledged.

This was the era of jazz, the flapper, drag balls and zillions of illegal speakeasies. Chauncey found:

Many men alternated between male and female sexual partners without believing that interest in one precluded interest in the other, or that their occasional recourse to male sexual partners, in particular, indicated an abnormal, ‘homosexual,’ or even ‘bisexual’ disposition, for they neither understood nor organized their sexual practices along a hetero-homosexual axis.

Most prophetic, he noted, “the social dichotomies of heterosexuality and homosexuality were not yet hegemonic.”

Chauncey’s revealing history of Gotham was published 1994. The U.S. has come a long way over the last quarter-century – and so too the historical dialectic. Today, three-fourths (75%) of American women and teen girls engage in premarital sex; nearly two-thirds (62%) of all women of reproductive age use a contraceptive. Most revealing, between 1991 and 2014, the teen birthrate fell by nearly 40 percent and the abortion rate for women 15 to 44 years has markedly declined.

Welcome to the new normal.

David Rosen is the author of Sex, Sin & Subversion: The Transformation of 1950s New York’s Forbidden into America’s New Normal (Skyhorse, 2015). He can be reached at drosennyc@verizon.net; check out