– “…Russia is paving the way for China in Africa – a supposition that makes perfect sense…China is only too aware of the destruction wrought by loss of the people’s right to self-determination when China itself was colonized by western interests. That Russia and China should cooperate in Africa is just as inevitable as Washington’s inability to maintain its self-bloated and expanding militarist behemoth in Africa in perpetuity”

The Secret War In Africa, Part 1 – By Steve Brown 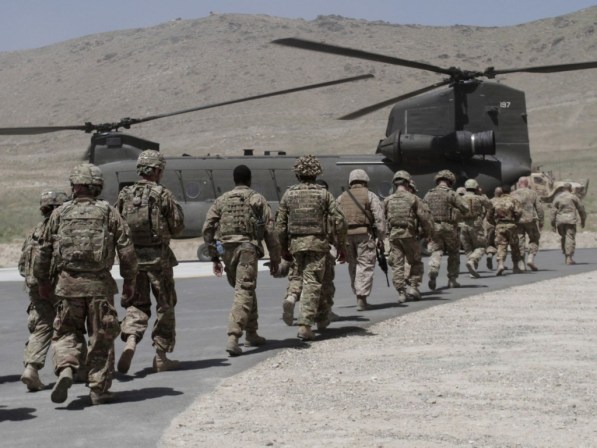 The Warsaw Pact may no longer exist, but by contrast the North Atlantic Treaty Organization is expanding its perceived role – the enforcement of western interest – especially in resource-rich Africa.

Trade War Subtracts 1% of Growth From China in 2019: Credit Agricole

NATO’s expansion in Africa is intended to assert western corporate influence, where Macron’s France apparently wishes to usurp Germany as the major influential European power.
But corporate interest is not the only driver for NATO’s war in Africa since the Russian Federation has significant ambitions there too. Russian non-governmental private military contractors or ‘Chastnaya Voennaya Kompaniya’ include:

…where PMC Wagner and Shield are particularly active in Africa.

The list above may seem impressive but does not compare with the list of western private military contractors operating in the Middle East and Afghanistan, which have existed far longer, are larger and better funded, and in many instances directly employed by the states they serve — including and especially the United States. By contrast, these Russian contractors operate on a small scale, are flexible, and employ a wide range of nationalities and skills.

Regardless, the Neoliberal Clinton-backed magazine Foreign Policy has already pronounced the demise of PMC Wagner and related Russian military contractor groups in Hauer’s hit piece The Rise and Fall of a Russian Mercenary Army.

And trouble it is. Mozambique nearly crushed mining giant Rio Tinto with its Riversdale coal scandal when Mozambique refused to allow coal transport down the Zambezi. And Rio Tinto is not the only corporate giant to come to grief in Mozambique. Mozambique has a major IMF debt problem too with widespread poverty and insurrection in parts of the country, where one of the most troubled regions is Cabo del Gado — source of Mozambique’s liquified natural gas.

Back when Gazprom was still barely in the running for the Cabo del Gado liquid natural gas contract, Mozambique’s government decided that drug-fueled takfiri terrorists roaming the province needed to go, and opted for the lowest-bid security contractor to clean up there.

The Mozambique security service bid resulted in the hire of PMC Wagner which quickly found their police action mired in exceedingly difficult terrain, opposed by anarcho-psychotics far more dangerous and characteristic of drug-crazed homicidal maniacs than of ISIL Jihadi terrorists.

Then by November of this year Wagner’s Cabo del Gado contract turned to tragedy when the Moscow Times reported the death of seven Russian mercenaries there. According to one source PMC Wagner is no longer operating in the province.

Russian Chastnaya Voennaya Kompaniya contractors have been active in the Central African Republic (CAR) as well, alleged to be protecting diamond mines there while negotiating with rebels in control of the Ndassima gold fields.

Three Russian filmmakers were tragically killed near there while investigating Wagner’s activities in the CAR at the time, provoking a western conspiracy theory that the reporters were killed based on their investigatory work. The truth however is far more mundane, that the reporters crossed a bridge too far in rebel territory without adequate armed protection.

One further but unconfirmed report claims that a Russian PMC contractor is missing in action in Somalia while two hundred PMC contractors have recently arrived in Libya. Meanwhile more than 1,100 Wagner Group contractors are operating in both Cyrenaica and Tripolitania. That is pursuant to Wagner and related PMC groups expanding in Libya, Cameroon, Uganda, Angola, and the Sahel… all to the great consternation of the US military of course.

Whether or not the above reports are exaggerated is irrelevant. The overall picture is certain to be misunderstood in the west. Russia’s intent in Africa – whatever it may be – is certainly as misunderstood now as it was leading up to the Suez crisis of 1956. That crisis led to a dangerous and pre-emptive invasion and occupation of Nasser’s Egypt hatched in a crackpot conspiracy involving Israel, France, and Britain.

The potential parallel to Suez in 1956 re NATO versus Russia in Africa today is not altogether preposterous. Because there is another side to the coin in what appears to be a nascent Russian Federation attempt at taming Africa for its own — and perhaps China’s! — corporate interests, being the toxic effect of AFRICOM/ NATO and its abject mismanagement of resources and subversion of the African right to progressive state self-determination.

That’s because the United States and NATO operate the largest military infrastructure in Africa with thirty-four bases (some secret) and thirty new US military or NATO construction projects underway in Africa spanning four countries.
The US military has more sites in Niger – five, including Niamey, Ouallam, Arlit, Maradi, and a secret base in Dirkou – than all other countries combined in Western Africa.

Chebelley drone base in Djibouti is the largest drone base in the world where the US can strike any target in the Sahel or for that matter Iran. And AFRICOM is building a larger base, Niger Air Base 201 in Agadez, capable of striking Algeria or any location in the Sahel region while the US operates a secret drone base in Tunisia (Sidi Ahmed) now opposed by president Qays Sayed (Kais Saied).

Kenya sports four more US military bases including Manda Bay and Mombasa, where the Manda bay base has consistently launched US drone strikes against Somalia, Yemen, and Iraq. There are three more secret US/NATO base locations located along the Libyan coast to carry out drone strikes as far-ranging as Pakistan.

Then there is Camp Lemonnier in Djibouti where approximately 4,000 US and NATO personnel are stationed. Camp Lemonnier is claimed to be the ‘only permanent US base in Africa’ – perhaps because so many new US/NATO bases are under construction while many of the rest are secret or simply addressed by some arcane acronym known only to the military.

Cameroon, Mali, and Chad also host what the US military calls ‘contingency locations’ no doubt leveraged by NATO in its rather lame attempt to control the Sahel. They include Garoua drone base, Douala, and Salak … bases which train private military contractors and track US drone strikes versus the immortal and indestructible Boko Haram terrorists, of course.

Another secret US base in Chad is the historic site of Faya Largeau. The present operational status of Faya Largeau is of course officially unknown. Gabon’s Libreville location exists to allow US military or NATO quick access for a rapid influx of US forces analogous to the base in Dakar, Senegal, which serves the same strategic purpose.

The list of NATO and US bases in Africa (whether secret or not) might continue on, however hopefully the point has been made that the mighty US/NATO presence in Africa extends far beyond the imagination of even the most devoted follower of military affairs.

That such a behemoth of an operation as represented by the US/NATO military presence in Africa could be seriously undermined by an influx of a small number of lightly armed and under-resourced Russian military contractors is not only laughable, but patently absurd.

To the contrary, what every citizen of the world should truly be concerned about is the bloated, dangerous, deadly, expensive, and destructive influence of NATO and the US military and its Surveillance State in Africa. That’s because the US military is essentially fighting itself – like Shiva the destroyer – the creator of terror.

Algeria, now a progressive forward-looking democracy with a presidential election eminent coming December 12th, 2019, is certainly aware of that. Algeria has deep understanding of western Neo-colonialism and its rule, and has avoided the western-inspired morass of IMF debt.

Algeria presently exports more oil to the rest of the world than Iran. Algeria has a stable economy and low inflation compared to other African nation, and potentially faces a bright future devoid of western meddling. Hence Algeria’s concern that it is surrounded on all sides by the tools of the US hegemon and its interventionism.

In a sense, Algeria provides an example to the rest of Northern Africa where Algeria is pursuing its right to self-determination. Most other nations in Africa cannot because they have already been subverted by the wars-for-resources and profit so favoured by corporate Washington.

The counter to this is of course Russia regardless of how feeble its efforts may seem, and how misunderstood Russia’s goals in Africa may be. But the Russian counter to US/NATO destruction and corruption in Africa may not be as straightforward as the reader imagines.

That’s because our source informs us that Russia is paving the way for China in Africa – a supposition that makes perfect sense. China is not now and has never been a Neo-colonial power. China is only too aware of the destruction wrought by loss of the people’s right to self-determination when China itself was colonized by western interests.

That Russia and China should cooperate in Africa is just as inevitable as Washington’s inability to maintain its self-bloated and expanding militarist behemoth in Africa in perpetuity.

This is the realization to be proved by time and by Washington’s continuing failure to comprehend the grievous and tragic mistakes of its hegemonic past – mistakes that the US is now only building on, exemplified only in part by the rabid anti-Russia hysteria now consuming it. And for the future of Africa… we can only hope.

The Secret War in Africa

One thought on “REALPOLITIK: The Secret War In Africa (Part 1) – By Steve Brown”