– “…Easter Island’s giant stone heads came to symbolize the collapse of a society. Our symbol should be the SUV…SUVs — heavier and much less fuel-efficient — made up about 18 per cent of vehicle sales in 2010. By 2018, their share had more than doubled, the association found. In 2010, about 35 million SUVs were rolling around the world; by last year there were 200 million”

The Symbol of Our Society’s Collapse? The SUV – By Paul Willcocks

ARTIFACT: They make climate change worse, with every kilometre. 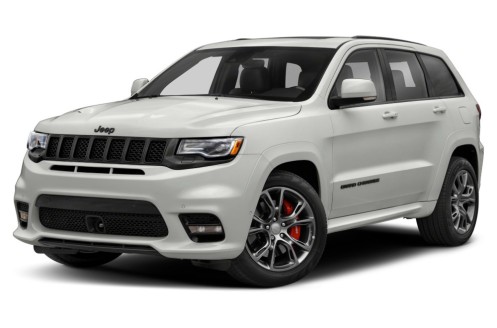 Thirsty beast: Among the least fuel efficient of all SUVs is the Jeep Grand Cherokee Trackhawk 4×4, whose 6.2 L V-8 engine slurps 21.4 litres per 100 kilometres when tooling around the city.

Easter Island’s giant stone heads came to symbolize the collapse of a society.

Our symbol should be the SUV.

Next month, the International Energy Agency will release a report on the extraordinary growth in SUV sales around the world between 2010 and 2018, when we were supposed to be getting serious about the climate crisis.

SUVs — heavier and much less fuel-efficient — made up about 18 per cent of vehicle sales in 2010. By 2018, their share had more than doubled, the association found. In 2010, about 35 million SUVs were rolling around the world; by last year there were 200 million.

It’s bad news for the climate. Our global infatuation with SUVs has added 544 megatonnes of carbon emissions a year — about the same as Canada’s total annual emissions.

SUVs’ share of new car sales in India and China have almost tripled. In Canada, 167,000 vehicles were sold in September. Three-quarters of them were SUVs and pickup trucks.

Personal choices have global consequences. If you choose to buy a roomy but efficient car — like the efficient full-size Hyundai Ioniq — and drive a fairly typical 15,000 kilometres a year, you’ll produce 1.4 tonnes of carbon emissions, according to Natural Resources Canada.

But if you opt for a Jeep Grand Cherokee, you’ll produce four tonnes of emissions. And you’ll spend almost three times as much on gas.

Of course SUVs make sense for some people. If you live in the wintery north or bash along forest roads, then a big four-wheel drive vehicle gives an extra level of security.

But 80 per cent of Canadians live in cities. They aren’t battling unplowed winter roads. They don’t need SUVs, or gigantic pickup trucks with uber-masculine names like Ram, Titan and Tundra.

Governments can do more — set stricter fuel efficiency requirements for manufacturers, limit advertising for high-emission vehicles.
But if we don’t care, they won’t either

Breaking up is never easy, but humanity is ready for this toxic relationship to end once and for all. 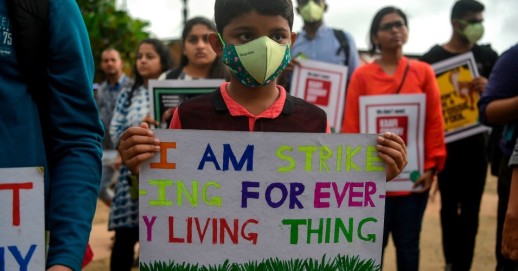 A boy holds a poster as he participates in a protest against governmental inaction towards climate breakdown and environmental pollution, part of the Fridays for Future demonstrations in Mumbai, India on Sept. 20, 2019. (Photo: Punit Paranjpe/AFP/Getty Images)

We know that this has been a difficult period for you, and there’s never really a good time to break up. But it’ll be better for you (and us) if we just rip off the bandage quickly and get it over with. We’ve had some fun times together, and we’re grateful for what you’ve given us: food, clothing, shelter, and of course energy. But we’re done—and just to be clear: it’s you, not us. (Well, mostly you, and a bit of us.)

We recognize how much we’ve grown while being with you, and even though it’s over now we’re still going to keep some of the mementos from our time together—I mean, we’re not giving up our vinyl record collection, so don’t even think about it on your way out! And until we can get our lives completely disentangled (which isn’t easy to do after being together for all these years), we’ll still remain connected.

Very soon, though, it’ll be totally finished between us, one way or another. We’re not into name-calling and clichés, but this obviously has been a toxic relationship from the beginning. You’ve held all of the power due to your inherited wealth, doling it out in just enough doses to keep us coming back for more and becoming dependent on you. Yes, we should’ve pulled the plug long ago, but that’s not how controlling dynamics work; we’ve felt trapped by the guilt and distracted by the pleasures all at once.

Hey, this could be a good thing for you, if you think about it constructively. You’re free to hook up with any other species you’d like, and now you can finally stop complaining that we’ve just been using you and bleeding you dry without replenishing your reserves over all these years. True, you might still get the last laugh when we finally decay into your coffers—but that’s like millions of years away, so whatever dude.

Listen, not to be harsh or anything, but we want to leave you with a few things that might help you in the future. First, you’ve really got to clean up your act; stop leaving a mess everywhere and take some responsibility for your impact on others. Second, try and give people some room to breathe, okay? You’ve been slowly smothering us for decades, and that’s just no way to build a healthy relationship. Seriously.

As for us, we’ve got big plans, and the sky’s the limit. It might hurt to hear it, but we’ve been seeing the Sun on the side lately, and now we’re ready to make that old Sol our main squeeze. No, we’re not settling down or anything—I mean, Wind and Tides look pretty good too, and you know what they say: Green is the new Black. We’re gonna play the field for a while, and at least without you there’ll be fields to play in.

Okay, so we’re still kind of bitter about the whole deal, but that’s our problem to work on going forward. Maybe it’s unfair to resent you for who you are, and we know that basic character really doesn’t change. All we can say is that you’ve brought out our worst tendencies (competitiveness, manipulation, selfishness, greed, wastefulness, and even violence), and it hurts to look at ourselves so closely.

Maybe this is who we’ve always been, or at least part of who we are by nature. But during all these years with you, it sometimes felt like only those qualities were on display. Still, we’ve grown a lot in some ways too, finding new potentials and creative capacities under your spell. Yet that doesn’t change how we feel now, and all of that growth and newness might have been found in healthier ways without you.

Dear Fossil Fuels, may you find solace and comfort in the future, perhaps reveling in some alone time and a much-needed period of relaxation and recharge. Any relationship is a two-way street, and clearly you’ve felt exploited at times as well. Really, this will be better for all of us: we’ll be healthier and happier, and who knows what you might someday become. The future is wide open now, and we’re finally moving into it.

Randall Amster, JD, PhD, is Director of the Program on Justice and Peace at Georgetown University. His books include Peace Ecology (Routledge, 2015), Anarchism Today (Praeger, 2012), Lost in Space: The Criminalization, Globalization, and Urban Ecology of Homelessness (LFB, 2008); and the co-edited volume Exploring the Power of Nonviolence: Peace, Politics, and Practice (Syracuse University Press, 2013).