– “…There is plenty of good news on clean energy, the experts said. The sums invested in renewables have stagnated in recent years – but that is largely because solar power costs have fallen 90 percent since 2009, requiring much less money to buy the same amount of equipment”:

Solar power is becoming so cheap so fast that in Abu Dhabi it’s now less costly to produce a unit of energy from the sun than from oil, leading energy experts said this week.

But that doesn’t mean a global switch to renewable energy will be inevitable or speedy, they told a London conference.

In Germany, renewable sources account for about a third of electricity production but backing for coal persists, he told the discussion organised by think tank Chatham House.

“It’s not just about phasing in the new technologies,” he said. “You need a phase-out plan for the cheap incumbent fuels.”

That could include tax breaks and credit to stop fossil fuel companies defaulting on debt if they fail or plants close early.

Such losses might be expected to drive a faster switch to renewable energy and quicken the demise of old plants, the experts said. But instead, traditional energy companies have lobbied hard for governments to remove support for renewables or even to tax them, and have blocked proposed fossil fuel levies.

That’s not the case in countries like China, which is rushing into solar and other renewables, driven by a desire to produce more power without worsening smog, and to make money by becoming a leader in a growing industry.

But Japan will struggle to make the same rapid shift, in part because both its banks and pension funds have major investments in traditional power companies, Kåberger said.

“For Japan it isn’t a technical problem but a financial problem,” he said. “The country doesn’t want big power companies with big debts (owed) to pension funds to go down.”

Another problem hampering renewable energy expansion is the high initial cost of solar and other renewable energy sources. With fossil fuel plants, costs are more evenly spread between construction of facilities at the outset and buying fuel over time. With solar energy, 90 percent of the cost comes upfront, which can be hard for countries, companies and people to manage.

That makes the cost of borrowing crucial to whether clean power takes off in a country, Graichen said. Germany can produce solar power more cheaply than sunny Spain “because we have lower interest rates, not because we have more sun”.

Countries that struggle to access finance are more likely to invest in fossil fuel capacity. Pakistan, for instance, desperately needs to generate more electricity to meet growing demand but is planning to get much of that from coal plants – still its cheapest option.

“Poor countries are going to electrify and they don’t want to slow down. If they can do it cleanly, that’s great, but if not they’re still going ahead,” said Laszlo Varro, chief economist for the International Energy Agency.

Telling them not to build coal plants “is not going to be a very fruitful conversation” unless alternatives are available, he said.

Still, there is plenty of good news on clean energy, the experts said. The sums invested in renewables have stagnated in recent years – but that is largely because solar power costs have fallen 90 percent since 2009, requiring much less money to buy the same amount of equipment.

Energy efficiency efforts also are ramping up around the world, Varro said. A move to more efficient appliances, for instance, means more people can buy fridges or air conditioning without driving a steep rise in planet-warming emissions.

Increased efficiency is one reason demand for new energy in many places is now small, even as GDP grows more quickly, Varro said, which is helping the transition to clean power.

One area where that shift is not working so well is in transportation, where cheap oil is encouraging people to buy bigger cars and drive more, he added.

Electric cars are growing in popularity but their success so far is “fragile”, he emphasised.

France has unveiled the world’s first solar panel road in a small village in Normandy.

The road, called Wattway, was inaugurated by ecology minister Ségolène Royal, who said earlier this year that she wanted to build 1000 km of solar panel roads in France. 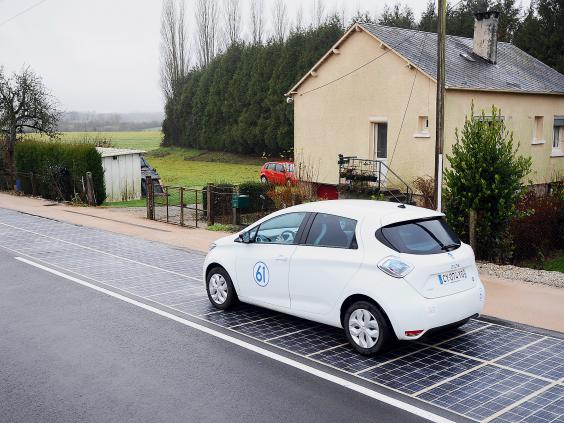 The route – financed by the state – is covered with 2,800 sq m of electricity-generating panels and crosses the village of  Tourouvre-au-Perche. The electricity generated should be able to power the street lighting in the village of 3,400 inhabitants.

Expected to be used by an average of 2,000 motorists a day, the highway will now undergo a two-year testing phase.

Despite the price of silicon – a primary component of photo voltaic cells – dropping dramatically over the last 10 years, the cost of such a project is still very high.

Marc Jedliczka, vice-president of Network for Energetic Transition (CLER), told Le Monde: “It’s without doubt a technical advance, but in order to develop renewables there are other priorities than a gadget of which we are more certain that it’s very expensive than the fact it works.”

A number of countries are experimenting with solar panels on roads. The Netherlands have 70 metres of solar road in operation since 2014 in the form of a bike path.

Piers Barnes, a Physics research associate at Imperial College London, told The Independent that cost and durability were the two main factors impeding the development of solar panel roads.

“As cost of solar panels comes down, increasingly interesting and innovative applications will be created in places one would not otherwise consider,” he said.

He did however, add that the UK was intrinsically more expensive when it came to solar panels due to its poor levels of sunshine.

3 thoughts on “THE ROAD UP AHEAD: Solar Energy Now Cheaper Than Oil, But Dirty Habits Die Hard (Archive)”