– “…ARAMCO represents the heart of the Crown’s Rothschild/Rockefeller global oil monopoly. In 2017 Saudi Prince Mohammed bin Salman announced that he would take the company public, but the IPO (initial public offering) has yet to happen. The reality is that the Saudis are already junior partners in the ARAMCO hall of mirrors”

Over the weekend, Yemeni Houthi rebels launched drone attacks on two ARAMCO oil facilities in Saudi Arabia, one of which houses the world’s largest oil refinery. The damage was extensive cutting Saudi oil output in half and bleeding 5.7 million barrels, or 5% of global crude supply, from markets.

Brent crude oil futures spiked $12 a barrel shortly after the market opened Monday. The 20% move was its largest inter-day move ever. US Secretary of State Mike Pompeo seized the opportunity to first blame Iraq, then Iran for the attacks, although Houthi Military Spokesman Yahya Sarea immediately televised a press release claiming responsibility for the attacks.

ARAMCO represents the heart of the Crown’s Rothschild/Rockefeller global oil monopoly. In 2017 Saudi Prince Mohammed bin Salman announced that he would take the company public, but the IPO (initial public offering) has yet to happen. The reality is that the Saudis are already junior partners in the ARAMCO hall of mirrors. 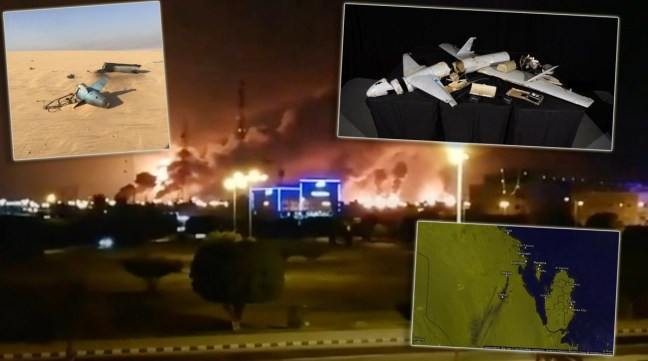 With 261 billion barrels of crude oil lying beneath its soil, Saudi Arabia remains the lynch pin in the international oil grab presided over by the Four Horsemen of oil (ExxonMobil, Chevron Texaco, BP Amoco & Royal Dutch/Shell).
As Joseph Story, Middle East analyst and former ARAMCO executive once said, “Only one factor is involved in where the price of oil is going to go, and that is Saudi Arabia”.

In 1933 Standard Oil Company of California (Socal) negotiated the first oil concession in Saudi Arabia with Saudi Finance Minister Abdullah Sulaiman. The Saudis were to get a 30,000 British pound loan and 5,000 pounds for the first year’s rent, all payable in gold. But US President Franklin Delano Roosevelt (FDR) had just embargoed gold exports in response to the Great Depression and Socal’s request for an exemption was turned down by FDR’s Secretary of State Dean Acheson.

In 1938 Socal, which later changed its name to Chevron, struck oil in both Saudi Arabia and Qatar and founded the Arabian American Oil Company (ARAMCO). Chevron quickly brought in Standard Oil of New Jersey (later Exxon), Standard Oil of New York (later Mobil) and Texaco as partners. This American half of the Four Horsemen would grow ARAMCO into the largest oil company in the world, nearly three times the size of Royal Dutch/Shell.

While British Petroleum (BP) and Royal Dutch/Shell, the two European Horsemen, owned the biggest share of the Iraqi Petroleum Company and dominated the Iranian Consortium, the US Horsemen now had their talons into the biggest prize yet, ARAMCO.

Other agreements were struck in the region as well. Chevron and Texaco formed a marketing arm known as Caltex, while jointly owning Bahrain Petroleum Company. BP joined with the Mellon family-controlled Gulf Oil to develop oilfields in Kuwait. By 1949, BP and Royal Dutch/Shell controlled 52% of Middle East oil reserves, while five US oil giants – Exxon, Mobil, Chevron, Texaco and Gulf-controlled 42%. [105]

ARAMCO soon boasted both the largest oilfield in the world at Ghawar and the biggest offshore field in the world at Safaniya. It also laid claim to expansive oilfields at Berri and Abqaiq. All told ARAMCO now controls over one-quarter of the world’s crude oil reserves. In the wake of the 1973 Arab oil embargo, ARAMCO embarked on the most expensive single industrial project in the history of mankind, a massive petrochemical and refining complex at Jubail. The company also runs the world’s largest deep water port at Ras Tanura on Saudi Arabia’s Persian Gulf shoreline. [106]

The Saudi government claims to have nationalized its domestic oil sector. The glossy ARAMCO World, which tends to show up in public libraries and dentist offices throughout the US, is the propaganda arm of the company. It boasts that the Saudi government took a 25% stake in ARAMCO by 1973, increased its stake to 60% in 1974 and by 1980 owned 100% of ARAMCO, now known as Saudi ARAMCO. The real story is a bit more complex.

Until at least 1988, the four US oil giants operated ARAMCO, even if the Saudi government did, in fact, own it. Exxon’s 1990 10K filing to the US SEC lists Exxon Overseas Corporation as a wholly-owned subsidiary, then states that Exxon Overseas owns a 28.33% stake in Arabian American Oil Company. Until he suffered a massive stroke, King Fahd had chaired the Supreme Council of Saudi ARAMCO, but board members include the former chairmen of Exxon and Chevron as well as a prominent US banker. [107]

No matter who actually owns ARAMCO, the Four Horsemen still call the shots through management contracts, service agreements and joint venture activity. These downstream niches are where the real profit margins are to be found and the Four Horsemen have generally been moving in this direction since the early 1980’s in their worldwide operations.

Saudi ARAMCO joint ventures include a huge refinery at Yanbu known as Mobil Yanbu Refining Company and an equally massive refinery at Jeddah which is 50%-owned by Royal Dutch/Shell. Mobil owns a majority interest in Luberef, a Saudi base oil refiner and in Petrolube, a blender which exports to over 40 different countries. Mobil and Royal Dutch/Shell are 50% owners of two ethylene crackers, one at Yanbu and one at Jubail Industrial City.

Shell owns 50% of Saudi Petrochemical Company and Saudi Arabian Markets & Shell Lubricants, 49% of both Al Jomaih & Shell Lubricating Oil and Modern Automotive Services Company, and 25% of Peninsular Aviation Services Marketing. Motiva is a Shell/Saudi joint venture in the US, with refineries at Norco and Convent, Louisiana. [108]

Texaco has two joint ventures with Saudi ARAMCO in the United States: Texas Refining & Marketing and Star Enterprises. [109] Sappco-Texaco Insulation Products is a venture between Texaco and Saudi Olayan Group, which is controlled by Sulaiman Olayan. As of 1990, Texaco got 92% of its US-bound crude oil from Saudi Arabia.

According to Platt’s Oilgram News, Saudi ARAMCO also supplies Big Oil with discount crude, giving them $5/barrel off the posted spot price of whichever grade of crude the Horsemen are buying. ARAMCO official James McPherson resigned in disgust because the company was holding back from direct competition with the US Horsemen. McPherson then revealed a $17 million ARAMCO tax fraud to Saudi authorities.

Abdullah Tariki, Saudi Director of Petroleum and Minerals, went public with the charges and announced new transit fees that would be charged the Horsemen to compensate for the rip-off. Within days of the proclamation Tariki was driven from office by King Fahd himself. [110]

ARAMCO’s lawyer was John McCloy, who chaired both Chase Manhattan and the World Bank. McCloy, who helped David Rockefeller wisk the Shah out of Tehran, was one of six “Wise Men” who advised President Johnson and was an influential member of the Warren Commission, which “investigated” the Kennedy assassination.

As of 1990 ARAMCO produced over 8 million barrels of crude oil a day, ensuring the Saudi role as “swing producer”. During the 1991 Gulf War ARAMCO underwent another expansion and now cranks out an unprecedented 10 million barrels a day. With the Shah deposed, the Saudi half of the Twin Pillars took on much greater significance.

One thought on “OILIGARCHY: ‘The Twin Pillars’, ARAMCO Strike Represents a Shot Through the Heart of Rothschild/Rockefeller Global Oil Monopoly”