– “…All of these aggressive efforts rest on controlling the narrative as one of the main pillars of Western hegemony and power grabs, and Western regimes have as much blood on their hands as the worst genocidal dictators that have ever lived, including those who are worshiped as heroes”

All Western media networks, broadcast and online, are now focusing on the China-Hong Kong oppression narrative, and purposely silent about the massive protests against the Deep State’s plan to privatize healthcare and school systems in Honduras . 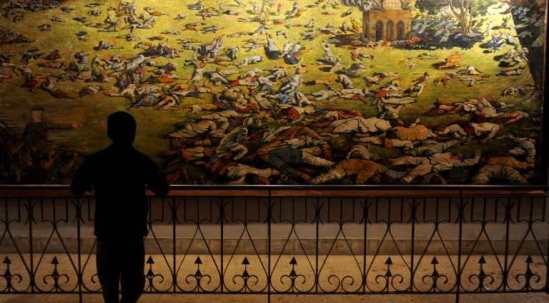 Western media are now speculating that China is readying a Tienanmen Square type of operation that shamed China for decades, to deal with Hong Kong protests that really has the CIA flavor for violent occupation of vital economic infrastructures.

Major social media networks have also deleted independent accounts discussing China’s side of the Hong Kong protests. Worst of all, major influencers accounts are also being deleted without warning even if the posts were mostly apolitical.

The US, on the other hand, is ready to use all means to remove the unwanted socialist governments of Venezuela, Nicaragua, and Cuba from power in order to achieve full control over Latin America, the Russian GRU chief Igor Kostyukov has warned.

All of these aggressive efforts rest on controlling the narrative as one of the main pillars of Western hegemony and power grabs, and Western regimes have as much blood on their hands as the worst genocidal dictators that have ever lived, including those who are worshiped as heroes.

Winston Churchill has as much blood on his hands as the worst genocidal dictators, claims Indian politician

Dr Shashi Tharoor, whose new book Inglorious Empire chronicles the atrocities of the British Empire, argued the former British Prime Minister’s reputation as a great wartime leader and protector of freedom was wholly miscast given his role in the Bengal famine which saw four million Bengalis starve to death.

In 1943, up to four million Bengalis starved to death when Churchill diverted food to British soldiers and countries such as Greece while a deadly famine swept through Bengal.

During an appearance at the Melbourne writers’ festival broadcast by ABC, the Indian MP noted Churchill’s orders related to Australian ships carrying wheat at Indian docks.

“This is a man the British would have us hail as an apostle of freedom and democracy, when he has as much blood on his hands as some of the worst genocidal dictators of the 20th century,” he said to applause.

He added: “People started dying and Churchill said well it’s all their fault anyway for breeding like rabbits. He said ‘I hate the Indians. They are a beastly people with a beastly religion’.”

Dr Tharoor, a former Under-Secretary of the UN, also gave an extensive description of British colonial exploitation and annihilation of traditional Indian industries such as textiles which reduced it to “a poster child of third world poverty” by the time the British left in 1947.

He said the “excuse that apologists [of British empire] like to make is, it’s not our fault, you just missed the bus for the industrial revolution. Well, we missed the bus because you threw us under its wheels.”

This is not the first time Dr Tharoor has voiced his frustrations about the way Churchill is remembered by the history books. In March, he argued the former PM who led Britain to victory in World War Two should be remembered alongside the most prominent dictators of the twentieth century.

“This [Churchill] is the man who the British insist on hailing as some apostle of freedom and democracy,” the author told UK Asian at a launch for his book. “When to my mind he is really one of the more evil rulers of the 20th century only fit to stand in the company of the likes of Hitler, Mao and Stalin”. He added:

“Churchill has as much blood on his hands as Hitler does. Particularly the decisions that he personally signed off during the Bengal Famine when 4.3 million people died because of the decisions he took or endorsed.”

Between 12 and 29 million Indians died of starvation while it was under the control of the British Empire, as millions of tons of wheat were exported to Britain as famine raged in India. In 1943, up to four million Bengalis starved to death when Winston Churchill diverted food to British soldiers and countries such as Greece while a deadly famine swept through Bengal.

“Not only did the British pursue its own policy of not helping the victims of this famine which was created by their policies. Churchill persisted in exporting grain to Europe, not to feed actual ‘Sturdy Tommies’, to use his phrase, but add to the buffer stocks that were being piled up in the event of a future invasion of Greece and Yugoslavia”.

“Ships laden with wheat were coming in from Australia docking in Calcutta and were instructed by Churchill not to disembark their cargo but sail on to Europe,” he added. “And when conscience-stricken British officials wrote to the Prime Minister in London pointing out that his policies were causing needless loss of life all he could do was write peevishly in the margin of the report, ‘Why hasn’t Gandhi died yet?’”

One thought on “THE MEDIA MONOPOLY: Dr Shashi Tharoor – ‘Britain Has As Much Blood on its Hands as the Worst Dictatorships’”