– “…A decision was taken to have Forrestal admitted to the aforementioned Bethesda Naval Hospital. Most worrying for Truman’s team, however, was the genuine fear that a destabilized Forrestal just might go off the rails and spill the beans on some of the U.S. government’s most guarded secrets. It was a dangerous and unpredictable time. It would soon turn deadly”

May 22, 1949 was the date on which the first U.S. Secretary of Defense, James Forrestal, died. Specifically at 1:50 a.m. As will quickly become apparent, the circumstances surrounding Forrestal’s final hours are swamped in controversy. All that we know with absolute certainty is that in the early hours of the 22nd, Forrestal’s body was found on a third-floor canopy of the Bethesda Naval Hospital, Maryland. Did he take a fatal leap out of the window of the 13th floor of the hospital, his mind in turmoil and suicide on his mind? Was it an accident? Or, was Forrestal terminated? Let’s have a look at this strange and disturbing affair. We’ll begin with a bit of background on the man himself. Forrestal was born just eight years before the dawning of the 20th century, in Dutchess County, New York. After after completing his education at Princeton University, he took a job with a Wall Street-based company, William A. Read and Co. A skilled figure in the field of economics, Forrestal quickly made for himself a significant amount of money. At the age of thirty-four he got married, to a journalist with Vogue, Josephine Ogden. It was hardly the ideal situation. Ogden was an alcoholic and someone who flew off the handle at just about any given moment. Forrestal had his flaws too. He was a very unemotional person: for Forrestal, getting close to people was incredibly difficult. To the point where he pretty much gave up trying. In 1940, however, things changed for Forrestal; massively so.

It was in that year that Forrestal decided to take his career in a very different direction: with the U.S. government. Amazingly, it wasn’t too long before he was offered the prestigious position of Under-Secretary of the Navy. Hardly surprisingly, Forrestal quickly accepted the prestigious position. From there, things really took off: he was soon given the job of Secretary of the Navy. Things were taken to an even greater scale when, in 1947 – the year in which the National Security Act was passed and the CIA was created – Forrestal was approached by the presidential office no less, to take on the role of Secretary of Defense; in fact, the very first U.S. Secretary of Defense ever. President Harry S. Truman was more than happy with his choice for the position. Matters soon began to change, however, and not at all in a good way – to say the very least. 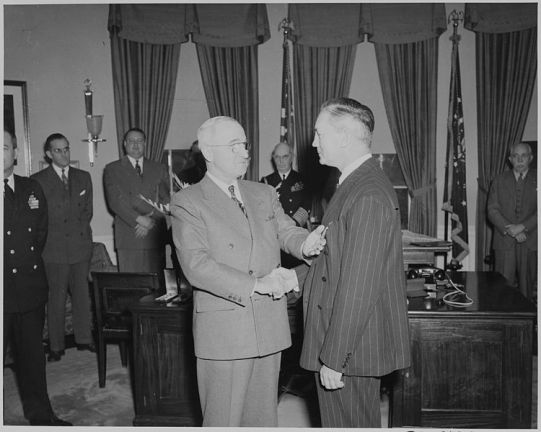 It wasn’t long at all before Forrestal began to exhibit psychological problems. Depression, caused by his huge workloads, were said to have been the main cause. Matters only got worse: the depression deepened, anxiety attacks kicked in, and a notable dose of paranoia overwhelmed him. For the U.S. government, Secretary of Defense Forrestal was a major asset to the infrastructure of the United States. His psychological issues, however, had him secretly marked by President Truman as a potential danger to the orderly running of the Department of Defense. Bit by bit, and throughout 1948, Forrestal’s state got even worse. Eventually, action had to be taken. And, it was. Forrestal was relieved of his job as the Secretary of Defense. The next thing for the government was to try and help Forrestal get well. So, a decision was taken to have Forrestal admitted to the aforementioned Bethesda Naval Hospital. Most worrying for Truman’s team, however, was the genuine fear that a destabilized Forrestal just might go off the rails and spill the beans on some of the U.S. government’s most guarded secrets. It was a dangerous and unpredictable time. It would soon turn deadly.

April 2, 1949 was the date on which Forrestal was taken to the hospital – for his good and that of the government too. It was apparent to the doctors and nurses that Forrestal was in a dangerous state. Forrestal suspected – in fact, he was absolutely sure – that dangerous characters were watching his every move. Who those same characters might have been all very much depended on Forrestal’s frame of mind: sometimes it was Russian agents. On other occasions it was spies in the U.S. government. As for the latter, Forrestal thought it was J. Edgar Hoover’s FBI. Forrestal’s mind was spinning – and far from in a good way. On top of that, Forrestal stopped eating for a while. Not a good sign. It’s important to note that when Forrestal was admitted to Bethesda he was in what amounted to solitary confinement, and the windows of the room were modified so they couldn’t be opened. Notably, when Forrestal’s family inquired why such actions had been taken, Captain George N. Raines, the chief psychiatrist at Bethesda, said it was to prevent Forrestal from leaping out of the windows and killing himself – which, some believe, is exactly what happened on the fateful night that Forrestal’s life met its end.

After a few weeks in the hospital, there was a clear, welcome, improvement for Forrestal. Both the doctors and the nurses concurred. On top of that, his appetite started to return. To the point where – in the presence of Rear Admiral Morton Willcutts, who had come to see his old friend – Forrestal chowed down a huge steak. It really did appear that good times were finally ahead. That all changed, however, only two days later. Or, rather, two nights. Death was just around the corner. It was a death shrouded in mystery. Let’s see what we know for sure about those final hours for the man who held some of the U.S. government’s most important secrets. The man assigned to keep a careful watch on Forrestal was Edward Prise. He was a U.S. Navy corpsman. Such was the length of their time spent together, the pair became good friends. As the night got longer, Forrestal told Prise that he didn’t need a sleeping pill and was going to dig into a book for a while. That too was a good thing. Or, at least, it seemed to be. After Prise’s shift was over, he was replaced by another military man, Robert Wayne Harrison, Jr. Forrestal’s end was almost upon him.

At some point into his shift, Harrison, Jr. left the room to run an errand. From that point onward, everything very much becomes murky and unclear – and probably something that will never be fully resolved to the satisfaction of everyone. When Harrison, Jr. got back to the room he was shocked to the core to see that Forrestal was not in his bed. And, the room’s windows were open. Harrison, Jr. raced to the window: the cord of Forrestal’s dressing-gown was tied to the radiator near the window. Clearly, the goal was death by strangulation. It turned out, however, that Forrestal’s weight caused the cord to snap and Forrestal fell ten floors to his death; something that absolutely no-one could survive. The official theory is that Forrestal – left alone – took his own life, possibly in a brief moment when his mind swung back to that state of depression and anxiety. The big question, however, is: could Forrestal have been pushed? The reason: to make sure he could never, ever reveal what he may have been exposed to in government.

It should be stressed that at the time of his death Forrestal was in one of his best states of mind of the last few months. Moreover, Edward Prise revealed that Forrestal had told him he would like Prise to take on the job of his, Forrestal’s, personal driver. In other words, Forrestal seemed to be making plans for a good future – and not plans for the end of his life. Then, there’s the matter of Forrestal’s brother, Henry. On the day of Forrestal’s death, Henry marched into the hospital, demanding that Forrestal be released into his, Henry’s, care. If someone on “the inside” wanted Forrestal dead, then allowing Henry Forrestal to take his brother home would have been disastrous. Forrestal would have been totally out of the control of those who may have wanted him dead;

Something that powerful players may not have wanted. It is, then, rather telling that Forrestal died the very night before Henry was due to take his brother back to his house. That’s not all, though: there’s also the matter of why, precisely, Robert Wayne Harrison, Jr., left the room. That was completely against the grain: official orders were that Forrestal was never, ever to be left alone. And, yet, on the very night that Forrestal died, he was left alone. Henry Forrestal was deeply concerned about the circumstances surrounding his brother’s death, to the point that he came to believe that his brother had indeed been murdered.

Seventy years later, the mystery remains precisely that: a mystery.

Nick Redfern works full time as a writer, lecturer, and journalist. He writes about a wide range of unsolved mysteries, including Bigfoot, UFOs, the Loch Ness Monster, alien encounters, and government conspiracies. Nick has written 41 books, writes for Mysterious Universe and has appeared on numerous television shows on the The History Channel, National Geographic Channel and SyFy Channel