– “…I find it strange that Yellowstone is the volcano that’s ‘going to doom humanity.’ One of the things that bothers me about that is that there have been super eruptions when humans have been on the planet. There’ve been two and, in fact, both of those were larger than the last Yellowstone eruption”

What’s the truth about the Yellowstone supervolcano doomsday theory?

If you spend any time on the internet, it seems every few months humanity is faced with a looming existential threat from the depths of space. Planet X/Nibiru, the rapture or a wayward comet are, according to conspiracy theorists, destined to destroy us.
However, there is one particular conspiracy, treasured by theorists, that our impending doom will come from within planet Earth – that lurking beneath America’s Yellowstone National Park is a supervolcano that will kill us all.
Yellowstone, in the midwestern US, is – they claim – about to erupt and send unfathomable amounts of matter into the sky, covering anyone in the vicinity in a pyroclastic flow of ash and rock, and blocking out the sun, wiping out almost all life on Earth in the process.

Conspiracy theories tend to draw on some grain of truth. The super volcano really has erupted before, three times in fact, over the last 2 billion years or so, but the theory goes that it’s bound to do so again soon, right? RT.com caught up with Michael Poland, Scientist-in-Charge at the Yellowstone Volcano Observatory, to find out the full extent of this lurking supervolcanic ‘threat.’
Poland specializes in volcano geophysics, particularly in how volcanoes change and behave over time. Using GPS, satellites and other methods, he studies how the surface of Yellowstone National Park moves to figure out what’s happening below.
Firstly, what is a super volcano?
“Super volcanos, or super eruptions, are these eruptions that are on the eruption intensity scale, there’s something called the volcano explosivity index (VEI) and eruptions that have a VEI of eight are considered super eruptions. And that’s pretty massive, most eruptions that we see would be VEI three, four. Big ones are five and then once a century or so there’s a six, so a VEI eight is really, really tremendous.” 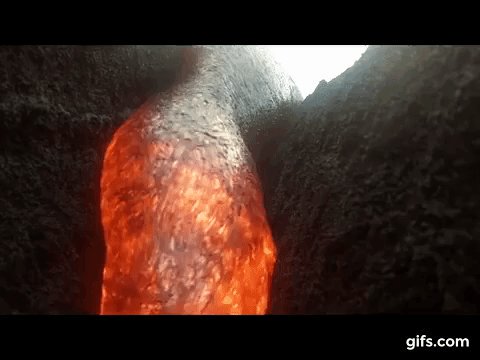 What would it take to cause one?

“You have to have a really amazing amount of magma in the subsurface, so that’s one of the criteria. In order to be able to put all of that stuff onto the surface and into the atmosphere you have to have it below the surface to begin with. And I think that’s something that is interesting about Yellowstone. We don’t know whether there’s enough magma beneath the surface to have a super eruption, the evidence suggests that a lot of the magma reservoir is actually solid, and about 15 percent of it is molten, so there may not be enough down there to have a super eruption.”

With that in mind, what are the odds of Yellowstone blowing it’s top?

“I find it strange that Yellowstone is the volcano that’s ‘going to doom humanity.’ One of the things that bothers me about that is that there have been super eruptions when humans have been on the planet. There’ve been two and, in fact, both of those were larger than the last Yellowstone eruption. There was one about 74,000 years ago from Indonesia and there was one 27,000 years ago from New Zealand. Both of those were larger than the last eruption at Yellowstone and humanity survived.”

What about so-called earthquake swarms at Yellowstone? And wasn’t there a particularly strong swarm earlier this year, 4.5 on the richter scale?

“Yeah 4.5 is definitely noticeable, you’d feel it and people did, but there was a 4.8 in 2014 and there was a 7.5 in 1959. Certainly this summer’s swarm was really impressive, there were thousands of earthquakes, but that’s sort of what Yellowstone does. It has swarms all the time and one of them has to be the largest. I don’t see that as something to fear, however, instead I see it as an enormous opportunity for study.”

“The idea that Yellowstone is going to erupt and kill us all is so demonstrably false. There’s an odd disconnect I think between common sense and reality and what we know to be true and false based on past events and this irrational fear about yellowstone in particular.”