– “…Why are bond investors willing to lend to Guatemala, Honduras and El Salvador at interest rates on par with the preferential terms enjoyed by regional economic powerhouses like Brazil? The truth, as it turns out, is more complicated: All three countries are viewed as stable, even safe, investments because they spend almost nothing on government services. And most of what little is spent is siphoned off by graft”

“Migration Is Part Of The Model”: The Real Roots Of Central America’s Migrant Crisis – By Tyler Durden

When the average American thinks about Guatemala, Honduras and El Salvador, their initial impression is typically that these are destitute countries overrun by crime, poverty and malnutrition, with central governments that are, at best, only semi-functioning. The crisis at the southern border has only helped reinforce these perceptions, as the mainstream media spins a narrative about impoverished migrant families fleeing the ravages of gang violence.

But if these Central American countries are so extremely impoverished poor, then why are bond investors willing to lend to Guatemala, Honduras and El Salvador at interest rates on par with the preferential terms enjoyed by regional economic powerhouses like Brazil? The truth, as it turns out, is more complicated: All three countries are viewed as stable, even safe, investments because they spend almost nothing on government services. And most of what little is spent is siphoned off by graft. 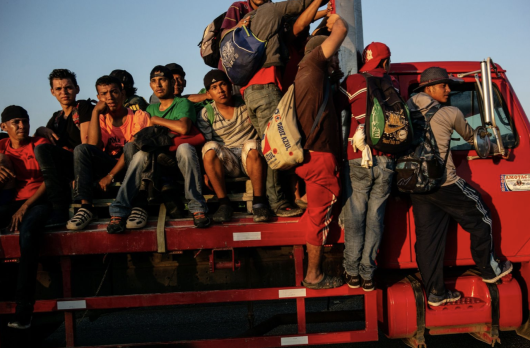 But if these countries can borrow so cheaply, then why aren’t they? Until last week, the group of three countries had gone more than two years without issuing a bond.

Fearing the type of runaway inflation presently plaguing Venezuela, fiscal austerity has become “almost like a religion” among the leaders of all three countries. Even the IMF, an institution that’s been criticized for years for pushing draconian budget cuts, has urged Guatemala to spend more.

“There’s an obsession with this issue,” said Ricardo Castaneda, an economist with ICEFI, a Guatemala City-based think tank that focuses on fiscal policy.

But with their infrastructure in shambles and their people reportedly suffering from high maternal mortality rates, why aren’t these governments willing to borrow more?

Well, as it turns out – and as a team of Bloomberg reporters explained in a lengthy report published on Wednesday – there’s a good reason. And it’s that the corrupt leaders of these countries don’t want to upset the apple cart that allows the system of widespread corruption and graft to flourish.

Perhaps inadvertently, the region has developed a system that encourages the poorest members of the population to emigrate by offering inadequate social services and almost no opportunities for advancement. That system is reinforced by the role that the growing remittance payments sent by illegal migrant workers in the US send back to their families. The payments represent a reliable flow of dollars that serves to underpin the financial systems of Guatemala, Honduras and El Salvador. That sum is larger more than 30 times greater than the annual aid payments President Trump just scrapped.

Put all of these factors together, and this is what you get: an economic model that appears to be based upon the illegal export of citizens.

When all of these elements are stitched together and viewed holistically, it can appear as if the economic model these governments have adopted is one based on exporting people. That might be an oversimplification – and it may not be the governments’ intent – but it is the net effect of the policy mix, according to longtime observers of the region.

“Migration is part of the model,” said Seynabou Sakho, the World Bank’s director for Central America. “A country may not have a big
deficit, but at the same time, the needs of its people aren’t being met.”

Regardless of the political class’s intentions, this is the situation and it doesn’t look likely to change any time soon. As the NYT just reported, Guatemalans have elected a new president who leveraged her connections within the country’s corrupt legal system to secure her victory.

The World Bank also tracks social spending on a per-capita basis. In El Salvador, the number came to $562. It was even lower in Honduras, $278, and Guatemala, $258. That’s a fraction of the $2,193 spent in Costa Rica or the $2,269 in Brazil. The World Bank hasn’t updated that data set since 2012, but analysts say there have been few signs of improvement in recent years. Patronage and corruption, they say, is compounding the shortfall, siphoning off funds earmarked for the poor. Transparency International ranks the three nations in the bottom half of its Corruption Perceptions Index, with Guatemala in the lowest quartile.

Lucrecia Mack said she was astonished by how rampant graft was when she took the top job at Guatemala’s Health Ministry in 2016. It’s “everywhere,” she said. Documents are falsified, signatures are forged, invoices are made up. She remembers one scheme where officials bought new tires for ambulances, re-sold them to pocket the cash and left the old ones on the vehicles..
The little money that the Health Ministry has winds up in the wrong hands,” said Mack, the daughter of a renowned human rights activist who was slain in 1990.

According to her calculations, Guatemala only spends about one-fifth of what it should annually on health care. “The budget has always been extremely tight.” As a result, she said, the ministry only has enough public clinics and hospitals to attend to about 6.5 million people. That was the population in 1975. It’s more than doubled since.

…As one analyst put it: People don’t just pick up and cross multiple borders for no reason.

“Immigration is a symptom of the diseases we have: violence, lack of economic growth, lack of investments in all of the rural areas,” Nayib Bukele said at a conference in Washington a few weeks before being sworn in as president of El Salvador this month. “People don’t leave their families and country to cross three frontiers and a desert because things are fine.”

DHS is installing a contingent of boots-on-the-ground agents to work with these governments to try and dampen the flow of migrants.
But without structural reform, there’s little hope for real, lasting change on the immigration front.